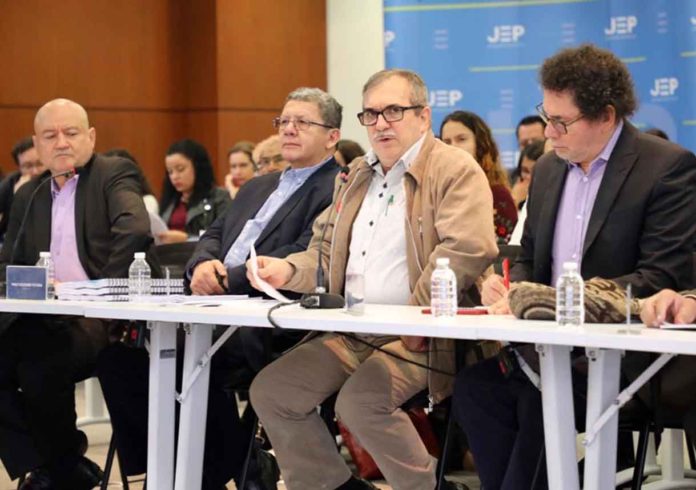 Within the 30-day timeframe allocated by the Special Jurisdiction for Peace (JEP) tribunal for the representatives of the former Revolutionary Armed Forces of Colombia (FARC) guerrilla to accept charges of War Crimes for kidnapping and Crimes against Humanity, Rodrigo Londoño, FARC’s former senior commander, accepted responsibility in a statement issued Thursday.

Londoño, known by his nom du guerre “Timochenko,” and leader of Comunes co-signed the document along with five former members of the guerrilla’s Secretariat. “We assume our responsibility and call on the other actors to join the same path,” reads the statement. “The war in Colombia included various political and military actors, national and foreign, the recognition of our responsibilities is fundamental to guarantee the non-repetition of the events.”

In a decisive paragraph made public and submitted to the tribunal, ex-FARC express: “We were, and are a revolutionary organization, therefore, our insurgent actions were always inspired by the need to transform society and create dignified living conditions, but we also recognize that in that process there were punishable facts and conduct in light of International Humanitarian Law.”

Londoño, Pablo Catatumbo, Pastor Alape, Jaime Parra, Julián Gallo and Rodrigo Granda also request JEP process amnesties that are pending for combatants serving prison time. The leaders of the newly named Comunes party reiterated their commitment to the peace process after 258 demobilized combatants have been killed since the implementation of the Final Accord in 2017.

Kidnapping is ranked as one of the most serious violations of International Humanitarian Law. The representatives of the former Secretariat faced the possibility of 20-year prison terms if they did not accept the formal accusations.

Ex-FARC’s “mea culpa” comes as the party seeks to distance itself from an organization accused of kidnapping 21,000 civilians and members of the country’s security forces. The worst years involving mass kidnapping occurred between 1998 and 2002.

JEP’s Case 001 also marks a historic ruling on practices and events involving Colombia’s half-century-long armed conflict that claimed the lives of 260,000 and forcibly displaced millions. “Truth will always be revolutionary, that is why we continue to rebuild our memory, an increasingly solid political project, the result of reflection, learning and reconciliation with victims,” concludes Londoño.