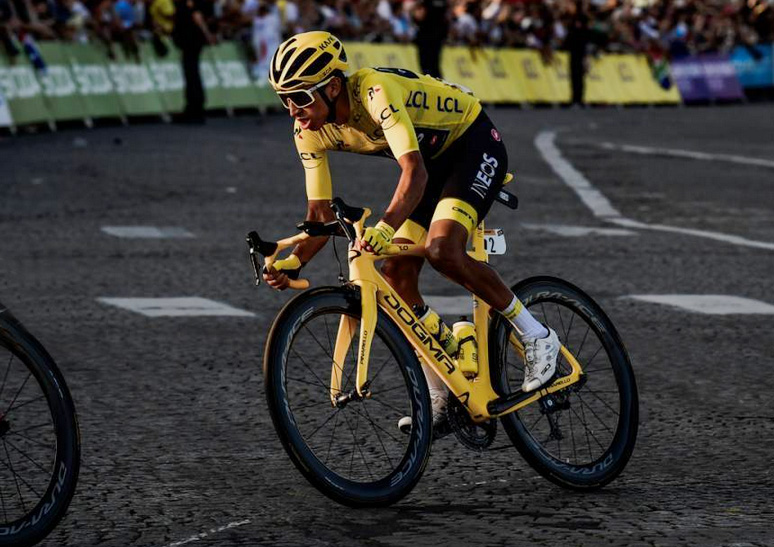 Every possible human emotion was felt across Colombia on Sunday, as the 128-kilometer distance between Rambouillet and the Champs-Elysée narrowed with each pedal of the 22-year-old cyclist Egan Bernal.

Wearing the iconic Maillot Jaune – Yellow Jersey – the young man from Zipaquira, Cundinamarca, was cheered on along the final stage of the 2019 Tour de France, and as he entered the streets of Paris with the peloton, the crowds grew larger, with Colombians waving their tricolored flag at intersections.

In his native Zipaquira, known for its beautiful Salt Cathedral carved into a mine that dates back to pre-Columbian times, the entire town had assembled in the central square to watch their local hero clinch the first-ever title as champion of the legendary race.

After three grueling weeks, with inclement weather, and moments of celebration and heart-break, Egan Bernal of team Ineos maintained a strong lead as the pack of cyclists crossed the streets of Paris, dashing past, and through the historic landmarks of the City of Light. As the former journalism student neared the final sprint along the Champs-Elysée with the Arc de Triomphe bathed in a golden light, Colombians basked in the glory that one of their own had clinched the most prestigious prize in the cycling world, and youngest rider in the Tour’s post-war history to step into the limelight of the central podium.

“It’s incredible, I don’t know what to say. I’ve won the Tour but I don’t manage to believe it,” said Egan accompanied on stage by Peter Sagan with the Green Jersey for Most Points, and Romaine Bardet for Best Climber.

Having completed the 2019 Tour de France in a time of 82 hours and 57 minutes, Bernal thanked his family and Colombia for his historic victory. “It’s a feeling of happiness that I don’t know how to describe it. This is the first Tour for us, Colombians. Many Colombians have tried before, we’ve had great cyclists in the past. But I’m the first one to win the Tour! Colombia deserves it.”

Speaking in four different languages (English, Spanish, Italian and French) Bernal thanked the Tour de France, his team, fellow countrymen and nation of Italy. His words were marked by grace, humility and dignity. All values that are embedded in the spirit of cycling and a sport as dear to Colombians as their green mountains.

“I couldn’t wait to cross the finish line,” remarked Egan during a ceremony which had  as its backdrop the skyline of Paris. “Now, I want to take the jersey to Colombia.”