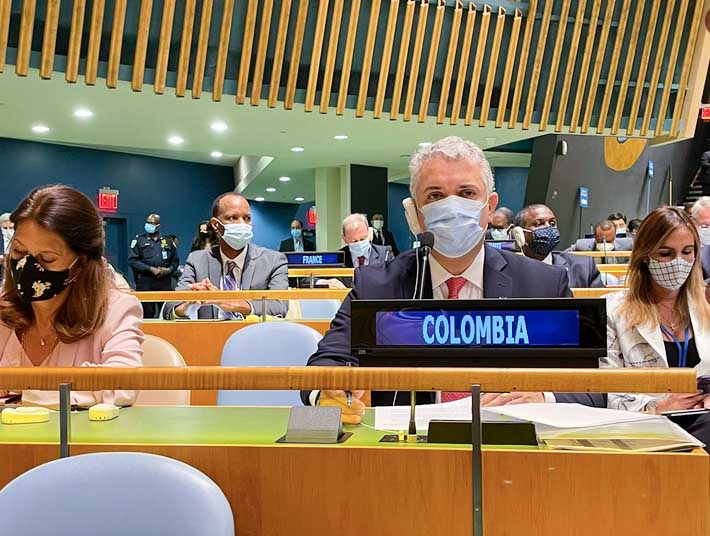 President Iván Duque made his final appearance at the United Nations as Colombia’s head of state, addressing world leaders on a host of pressing issues that affect the global community, from growing poverty levels, to immigration, vaccine inequality and climate change. The speech focused on universal themes and domestic realities, beginning with how COVID-19 “changed our daily lives, our interaction with others, and took away loved ones.” He then went on to criticize “unprecedented gaps between nations” regarding the vaccination process.

“While some nations acquire a number of additional doses for six or seven times their population and announce third booster doses, others have not applied a single dose that gives them hope,” he said. Words that challenge those of U.S President Joe Biden and his call for all persons to receive a booster shot six months after a first completed cycle. “We have observed the failure of multilateralism to respond in an equitable and articulated manner to our most acute moments,” remarked President Duque.

Within the Colombian context, President Duque addressed the deep economic divides that were exacerbated by the pandemic, stating that his administration has “acted with determination and creativity” to present an ambitious social agenda to help the most vulnerable. “Until December 2022, we will maintain an emergency basic income, the Solidarity Income, to reach more than four million families, as well as providing direct economic support to more than 25 percent of entire population.”

The President highlighted that difficult economic measures to reduce public expenditure while maintaining welfare programs were “achieved without populism, demagoguery or affecting the competitiveness of our companies.” Referring to the expansion of education and health benefits as the “Colombian New Deal,” President Duque then tackled climate change, and one of the main reasons of his official visit to New York and Washington. Colombia, he said, would reduce greenhouse emissions 51% by 2030, and same year, in which the country would achieve zero deforestation.

He also set another deadline: Colombia will be carbon-neutral by 2050. President Duque attends next month’s COP26 Climate Change Conference in Glasgow. He then called on the World Bank, Inter-American Development Bank and Development Bank of Latin America (CAF), to strengthen green financing and initiatives that support non-conventional renewable energies.

Then it was back to the pandemic, and how in the midst of a national health emergency Colombia legalized the migratory status of more than a million Venezuelan migrants. “We take on these challenges without being a rich country, and at a huge fiscal cost,” stated Duque. “The end of the Maduro dictatorship is the only viable path for the well-being of the Venezuelan people, and it must be, above all, the purpose of international action.”

A sizeable section of the UN speech was dedicated to the implementation of the peace process with FARC, signed in 2016 by former President Juan Manuel Santos. Referring to the agreement as “fragile,” and one challenged by FARC dissidents and ELN guerrilla, President Duque reminded delegates that drug trafficking is an enemy of peace and the environment. “Every gram of cocaine consumed in nations that activate demand means a homicide and an ecocide in Colombia. For every hectare of coca that is planted, two hectares of humid tropical forest are destroyed.”

Before ending his speech at the 76th Session of the General Assembly, Duque made one thing very clear: Colombia isn’t alone in facing complex challenges on the world stage. “We know that there are many obstacles to overcome, but there is this great nation that reflects and thinks globally to be an example and generate progress. The Colombia that believes in multilateralism, the Colombia that invites common action.”