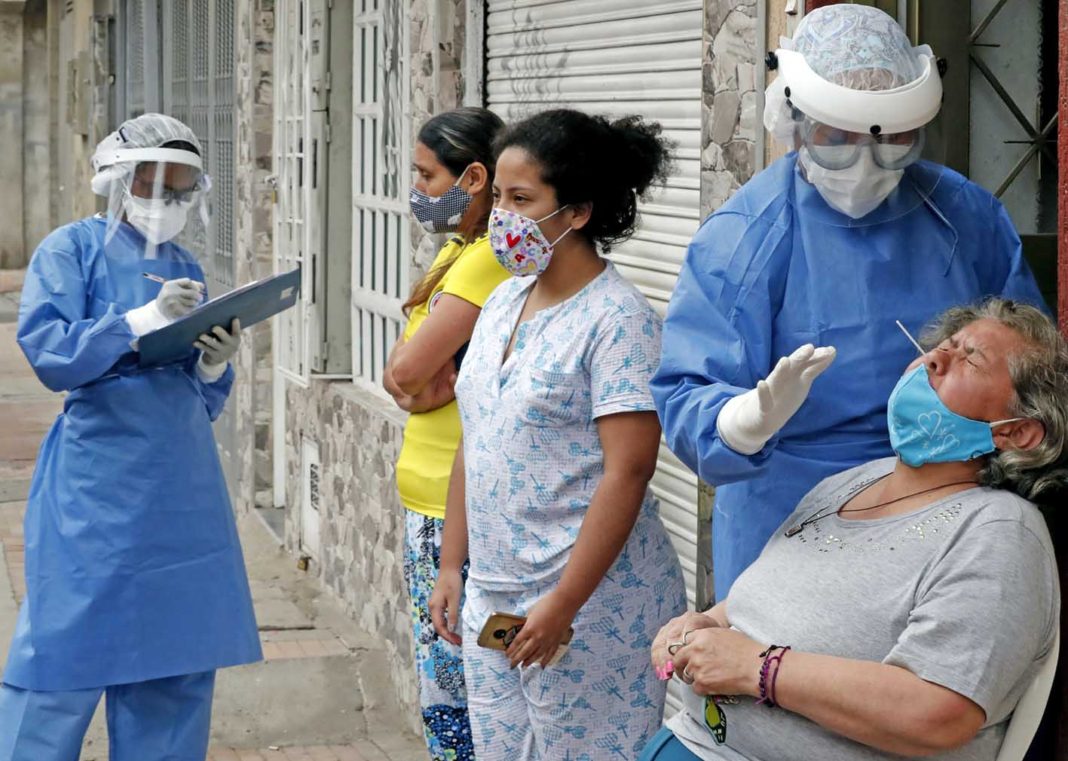 After a weekend in which Colombia joined the ranking of top 20 nations with coronavirus cases, surpassed by Bangladesh with 165,000 cases and followed by Canada with 107,580 cases, according to Johns Hopkins data, on Monday, new infections increased by 3,171 after the National Institute of Health processed 20,459 PCR tests.

From Monday’s count, Bogotá registered 1,085 cases and a slight decrease from previous days – 1,286 on Sunday and 1,135 on Saturday – even though the capital remains at the epicenter of the pandemic. Bogotá’s new COVID-19 total stands at 37,641 of the nation’s 120,281. The bulletin of the Ministry of Health confirms that 50,370 patients have recovered, while 65,459 are still “active.” The death toll added 146 victims on Monday, putting total deaths since the outbreak of the pandemic at 4,210.

Despite measures by President Iván Duque and Mayor Claudia López to contain and decelerate the spread of coronavirus, from the strictest lockdown to flexible reopening of certain economic sectors, public opinion has not swayed favorably towards the two leaders, according to a recent Invamer poll. While Duque saw a sharp increase in his ratings in April, rising from 38% in March to 52%, only 41% now approve of the government’s management of the pandemic. And for Bogotá’s López, who began her administration with an 89% approval, June saw a marked decrease to 76%.

Having enacted draconian measures during April and May, from the gender-based Pico y Género restrictions to identity card limitations on mobility with Pico y Cédula, disapproval of how Bogotá is handling the coronavirus crisis increased from 9% to 22%.

Even though the results of Invamer are based on 1,200 individuals polled, disastrous indicators with record-high unemployment and uncertainty regarding economic recovery for the capital are some of the worrisome issues on the minds of Bogotanos, compounded also by a deteriorating security situation.

On Monday, after a recording surfaced between police officers discussing orders to meet daily quotas to fine citizens for violating quarantine and obligatory use of facemasks, López came out to denounce the charges, claiming that “we do not put a quota on the Police to comply with sanctions and subpoenas, because these only lead to abuse of authority.”

The Metropolitan Police announced that it will carry out an investigation into the accusations. Mayor López also stated that new restrictive measures to limit mobility and access to services could be announced this week after ICU occupancy reached 83% despite the hand-over of 200 ventilators by the national government since June 15. López downplayed a return to a strict lockdown in July after receiving the shipment of ventilators. And just by raising the specter of strict quarantine for the city – which requires a Presidential decree – can only further erode confidence in the Mayoralty and district’s response to the public health crisis.