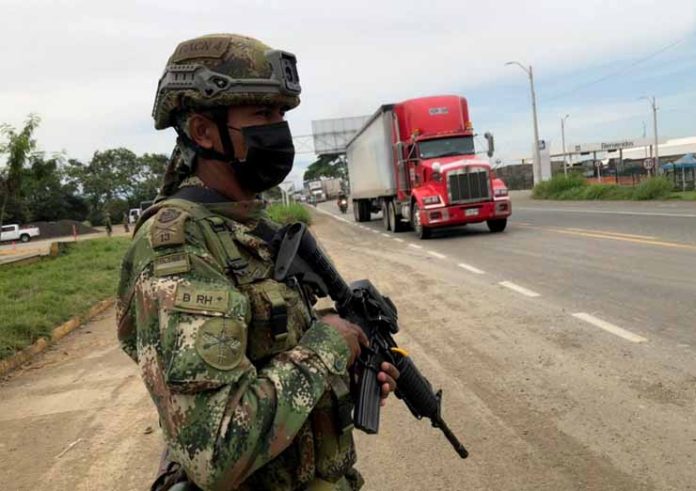 Colombia’s largest trade unions are increasingly isolated in a national strike of their own making, and popular movement that ignited over a tax reform bill that never reached Congress. As anger and frustration mounted over elusive reforms, compounded by 15 months of pandemic restrictions, rising unemployment and extreme poverty, the self-appointed National Strike Committee has launched a war of attrition on itself, eroding any popular support – and empathy – it may have garnered when strike action was declared on April 28.

Even though every Colombian city has endured protests, both peaceful and many descending into violence, the Committee, as well as pro-strike politicians, among them left-wing Senator Gustavo Petro, are now scrambling to attempt to salvage some degree of political moderation given that the start of demonstrations over taxes was a pretext to debilitate President Iván Duque during the final year of his administration.

But the timing could not have been worse in terms of public opinion, given that the protests began as the third wave of coronavirus cases appeared to be under control with the nation registering an average of 14,000 per-day cases.

The intent by the Committee and left-wing leaders to legitimize road blockades during 45 days of Paro Nacional, and which have prevented the movement of essential goods and medical supplies, has cemented a political narrative that there was near-criminal intent to destabilize the nation at a momentous time in which ICUs were reaching maximum capacity, and some 500 persons were dying from the disease every day.

During six weeks of civil unrest, Colombia’s per day case count has doubled, and on Thursday, the nation registered another record number of deaths: 570. Epidemiological experts have warned the government of President Duque that as the strike continues, COVID-19 deaths will continue to increase, potentially claiming up to 800 victims of the disease every day. And despite the Committee’s disregard for the welfare of the medical community, medical missions and thousands of patients potentially dying at home given depleting oxygen supplies in hospitals, Senator Gustavo Petro has bombastically stated on social media that he will win the first and second round of the 2022 presidential race, and peremptory victory call that has jump-started coalitions and future alliances among centrist, liberal, conservative and right-wing candidates.

Petro’s conclusive affirmation has defined the battle-lines for an “everyone but Petro” campaign. Even one of the strike’s spokespersons, Nelson Alarcón of the teachers union Fecode, was captured in a video stating that behind the social protests is an electoral and political aim to derail Duque’s right-wing party Centro Democrático ahead of next year’s electoral race. “This is a long-term movement, to reach 2022 and go further: defeat Centro Democrático, defeat the far-right and clinch power in 2022,” said Alarcón.

The strike’s political motives have been unveiled at the expense of 16,000 additional victims of coronavirus (since April 28), and while the confirmed deaths of 68 civilians during protests (according to HRW) is equally tragic and regrettable, all loss of life during this uprising, as well as senseless destruction of public infrastructure, could have been mitigated had the Strike Committee from the onset defined a humanitarian roadmap for exercising legitimate protest.

Fecode’s claim that they have “no control” over other movements, including student groups and so-called “first line” strike defenders, reveals deep fissures that could implode the Strike Committee. Colombia’s trade unions rely on a historic symbiotic relationship with the national government to negotiate workers’ salaries, among them, the essential minimum wage increase at the end of every year.

Unions know that they can push the government to the brink, but no further, regardless of how deep the divide. Alarcón’s video confession – intentional or not – also reveals that the unions may be open to returning to the negotiating table given that the Paro Nacional has bankrupted businesses and crippled exports for large unionized sectors, among them oil and mining. The Paro has cost the Colombian economy COP$12 trillion pesos (US$3 billion) during the first month – or almost half the total revenue the ill-fated tax reform bill was destined to levy in 2023.

Other sectors that have also been affected is coffee, with exports falling 52% given cancellations of shipments from international buyers. The coffee industry employs tens of thousands of seasonal workers, many from vulnerable populations, and whose livelihoods are at risk of joining the extreme poor. Minister of Agriculture Rodolfo Zea stated that some 1.8 million additional jobs could be lost with road blockades near the country’s largest Pacific port Buenaventura.

Staggering unemployment, business closures and 22,000 additional COVID-19 deaths are on the National Strike Committee’s watch, and while the organization’s progressive candidate has preemptively clinched electoral victory, Colombians are now all too aware that their democracy and fundamental freedoms must be safeguarded during the next twelve months from political opportunists.