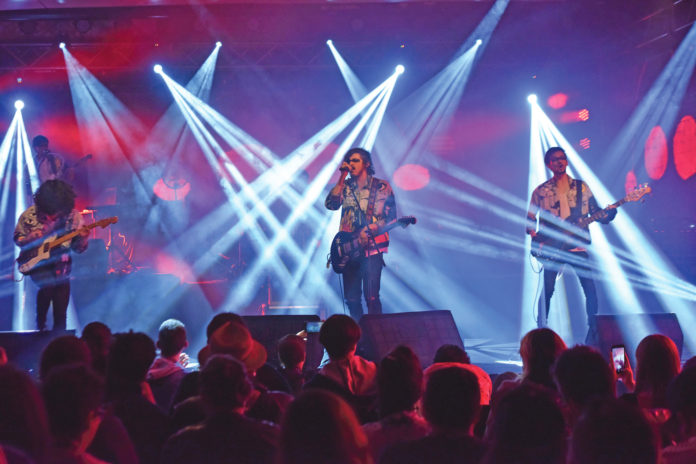 It’s the most important music industry event in Colombia, uniting, under one roof, thousands of musicians, songwriters and recording artists for four days in September. Starting on the 11th this month, the 7th edition of Bogotá Music Market (BOmm) covers every sound from a musically diverse country, performed on instruments that range from the traditional to the contemporary.

Organized by the Bogotá Chamber of Commerce (CCB) to provide musicians a forum in which they can showcase their songs to industry experts with the hope of breaking into a highly competitive sector, BOmm also provides bands with a unique chance to perform in front of live audiences, thereby perfecting their stage presence and repertoire.

This year’s BOmm will host 205 national and international buyers ready to hear new sounds that have a potential to reach global audiences, such as the electric harpists from the Eastern plains called Chimó Psicodélico or the social hip-hoppers from the Pacific Coast with Afrotumbao. Even though many artists headlining this year’s BOmm may be well known to local audiences, and have received international recognition at the Grammys, such as Diamante Electrico, Mónica Giraldo, and Monsieur Periné to name a few, many Colombian musicians are still waiting to be discovered. Among the alternative rock bands participating this year, 11 recently performed at the IDARTES-sponsored outdoor rock festival, Rock al Parque, including Apolo 7, Durazno, La Sonora Mazuren and Skampida.

BOmm is instrumental by offering one large venue within the Bogotá Chamber of Commerce’s main business center of El Salitre so that songwriters, producers, sound technicians and interpreters can exchange personal experiences of an industry that has witnessed huge transformations during the last decade with digital streaming, new licensing practices and anti-piracy laws.

Colombia is admired for its unique sounds and considered an industry leader in South America. As the country’s reputation grows for producing a slate of new talent every year, BOmm has selected the high-profile buyers to chart the musical future of a nation where increasingly cumbia, salsa, and carranga fuse with rock, ska, and electro beats. Many of the musicians who will play their tracks to the experts are based in the country’s largest cities (Bogotá, Medellín, Cali, Santa Marta, Barranquilla), but many others come from remote communities where traditional music genres predominate. This year, artists from Tenjo (Cundinamarca) and La Ceja (Antioquia) will participate alongside legends of Colombian songwriting, such as Toto La Momposina and the fourth generation of San Jacinto gaiteros.

Every aspect of the music industry is represented at BOmm, and for Mónica de Greiff, President of the Bogotá Chamber of Commerce, the event represents a “boost for Colombia’s music industry by bringing international demand directly to the artists. BOmm has also been fundamental in making Bogotá a UNESCO-listed Music City in Latin America,” says De Greiff.

Through the FOCO Cultura España-Colombia program, Spain, a county known for its vibrant music scene, is the guest nation of honor at BOmm. As part of the academic agenda in BOmm Talks, prominent international professionals will share industry insights of what musicians can expect once they sign a record label, or get management representation.

BOmm Labs are the roundtable discussions that include workshops with professionals from the local industry in which other relevant issues are addressed. The BOmm Labs are open to the public.

The last day of BOmm is part celebration, part business platform through the Music Cluster Initiative of Bogotá-region, in which the Bogotá Chamber of Commerce will present its advances and latest projects to make the music cluster even more attractive to outsiders. The forum will also highlight the importance of the Orange Economy in promoting economic growth and development on a national scale.

As the organizers of the country’s most important art fair ARTBO, the film cluster Bogotá Audiovisual Market (BAM) and Bogotá Fashion Week (BFW), music plays a major part in our daily lives, and as demand for music consumption grows, so too the necessity to open up exciting markets for a billion-dollar industry.

Colombia may be synonymous around the world with Shakira and the rock vallenato of Carlos Vives, yet BOmm continues to work at a grassroots level by helping emerging artists get the international recognition they deserve, while, offering specific guidance to help talent prosper. From signing that first business contract to fostering social harmony, the Bogotá Chamber of Commerce with BOmm, once again, puts culture at the heart of the city, making it a better place for everyone to live, work and when it comes to music – download.