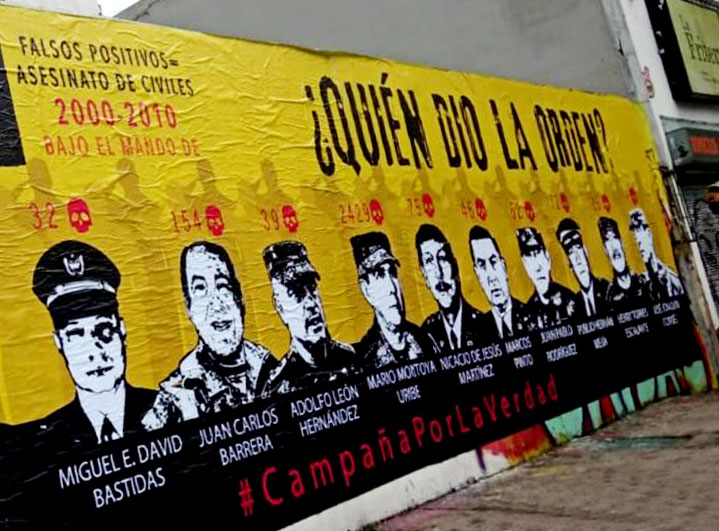 In another landmark decision by Colombia’s Special Jurisdiction for Peace (JEP) tribunal, established as part of the 2016 peace accord with the Revolutionary Armed Forces of Colombia (FARC) guerrilla, the court handed down indictments against 10 members of the Army, and one civilian, on charges of War Crimes and Crimes against Humanity for their role in the murder of at least 120 civilians, and presenting these deaths as “combat casualties.”

The indictments are part of Case 03, in which members of the military, are being held accountable for the extrajudicial killings of 6,402 persons. JEP charged a Brigadier General, two colonels, two lieutenant colonels, a major, a captain, two sergeants, and a corporal, for events that occurred between January 2007 and August 2008, in the Catatumbo region, department of Norte de Santander. The magistrates also charged the accused for the forced disappearance of 24 victims of the internal conflict and “widespread and systematic attacks against the civilian population.”

Brigadier General Paulino Coronado was the former commander of the 30th Brigade that operated across northeast Colombia. This is the first time since JEP was established as a parallel justice system that members of the Colombian Armed Forces have been indicted for so-called “false positives.” According to JEP, “the forced disappearances and proven murders had the same characteristics and the same purpose: to respond to the pressure for casualties and thus meet the official indicator of military success.”

The victims of the Catatumbo murders were young men aged 25 to 35 years old and who worked as farmers, merchants, and informal transporters. Judge Catalina Díaz also highlighted that many of the victims were taken from their territories and executed in remote regions of the country where the army was fighting the guerrilla. The civilian who “worked as a collaborator with two military structures” has been identified as Alexander Carretero. “As of December 2007, a criminal business was started in which members of the Army negotiated with third parties to recruit young people from other departments, municipalities and cities in exchange for economic remuneration,” stated JEP’s Chief Justice Eduardo Cifuentes.