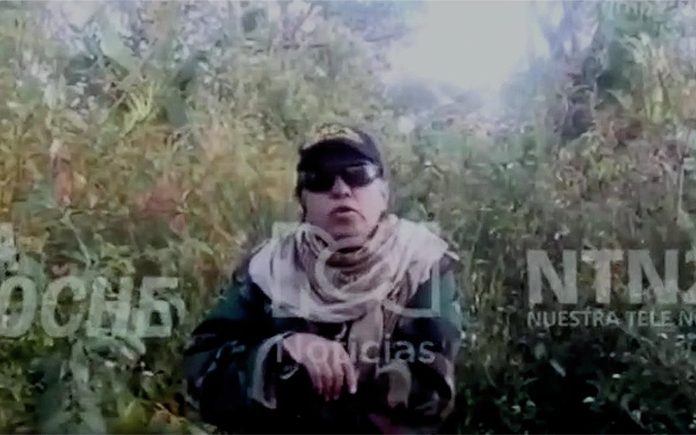 A blurry photograph – but photograph nonetheless – taken somewhere in Venezuela of alias Jesús Santrich is proof, claims the Colombian government, that the regime of Nicolás Maduro is protecting the leaders of FARC dissidents and members of the ELN guerrilla.

The image of the blind commander, identifiable by his checkered keffiyeh and dark sunglasses, as well as pictures of other dissident commanders taken in the same country of aliases Iván Marquez, Romaña and El Paisa, led High Peace Commissioner Miguel Ceballos to declare that the “dictatorship” is protecting “the enemies of peace in Colombia.” Ceballos’ remarks escalated tensions between the two countries, days after the government of President Iván Duque legalized the status of more than a million Venezuelan migrants in the country, and heralded by the United Nations “as a historic humanitarian gesture.”

The publication also claims that 4,927 FARC dissidents and ELN combatants are protecting Maduro from an invasion by Colombia, backed by the United States. “FARC dissidents circulate freely in the neighboring country and camouflage themselves among civilians in rural areas and even in urban areas, such as the city of Elorza, three hours from Arauca, where Márquez lives in a condominium protected by the Nicolás regime,” reads and excerpt from the investigation.

The visual confirmation ex-FARC’s former chief peace negotiator Iván Márquez receiving state protection from the Venezuelan regime comes with allegations that the government of former President Juan Manuel Santos, and the 2016 Nobel Peace Laureate, facilitated a travel permit on “humanitarian grounds” for ELN’s maximum commander, alias “Gabino,” to abandon the country to Cuba. The documents were issued in July, 2018, for the safe passage of Nicolás Rodiguez to attend a funeral, despite arrests warrant by the Attorney General’s Office for terrorism, extortion, homicide and kidnapping. A criminal investigation has been opened against members of the Santos government on grounds of possible prevarication and falsification of public documents.

On Monday, Santrich resurfaced in a video in which he directly threatened President Duque as a “memento mori” – Latin term for Death shall come. The video was obtained by the television program La Noche. Santrich’s vitriolic rant was purportedly recorded this month and shows the dissident surrounded by a camouflaged security detail and jungle tents. In a direct character assassination of the President, Santrich reminds Duque “that every fat pig gets its Christmas.” President Duque responded to the content of the video, saying: “I don’t fear threats from criminals.” Intelligence officials claim Santrich is in the Venezuelan state of Zulia, close to the Colombian departments of La Guajira, César and Norte Santander, from where he controls drug trafficking routes.