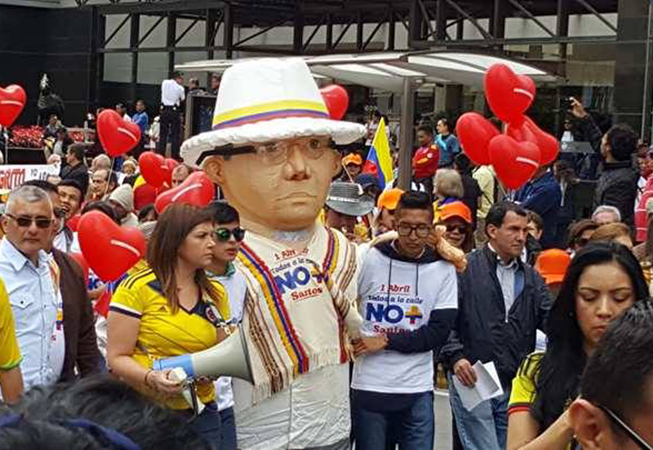 The opposition Centro Democrático party of former president Álvaro Uribe has called a nationwide protest Saturday in 20 cities against the government policies of President Juan Manuel Santos. The right-wing senator will march with his supporters in Colombia’s second largest city, Medellín.

The state of the economy, peace process with the Revolutionary Armed Forces of Colombia (FARC) guerrilla and corruption allegations involving the Brazilian construction giant Odebrecht with financing Santos’ 2014 reelection are just some reasons many are expected to take to the streets across Colombia.

The march is the first test by Uribe to measure his political clout ahead of next year’s presidential election and chance by the opposition to rally support after President Santos pushed through the peace accord with FARC last November, despite the October 3 plebiscite in which a slim majority of Colombians defeated the accord at the polls. The plebiscite called to ratify by popular vote the accord with the world’s oldest guerrilla insurgency failed after 50.2% of the electorate said “No” over 49.8 percent with “Yes.”

The marches organized by Uribe and former Attorney General Alejandro Ordóñez hope to motivate Colombians to protest unpopular economic policies of the Santos government, including a heavy-handed Tax Reform, Reforma tributaría, that was approved January by Congress.

The Centro Democrático senator and possible presidential hopeful Iván Duque stated that the protest should not be seen as a political act. “It’s a march of the people and for the people.” Former Conservative President Andrés Pastrana has rallied support for the march, claiming: “As conservatives we will be in the march to protest againt the corruption of Juan Manuel Santos and his coup d’état of the institutions.” Pastrana tried in vain to forge a peace agreement with the Marxist rebels during his 1998 to 2002 presidency. Pastrana was succeeded by Uribe and whose two terms were marked by a hardline military position against FARC. Santos served as Uribe’s defense minister from 2006 to 2009.

The marches are expected last all day with a rally summoned midday Saturday at Bogotá’s Plaza de Bolívar.

Among the thousands expected to protest Saturday is the former hired hitman – sicario – of the Medellin Cartel, alias “Popeye”. John Jairo Velásquez was considered one of the most dangerous men within Pablo Escobar’s criminal organization and organized the killing of journalists, judges, magistrates, police, and anyone his boss considered an enemy of the cocaine trade. “Popeye” masterminded more than 200 car bombs during Escobar’s reign of terror against the state. Velásquez surrendered in 1992, a year before Escobar was killed in his Medellin hideout. He was was sentenced to serve 22 years in Colombia’s maximum security prison Combita.

Upon his release in 2014, the 52 year old Velásquez has dedicated his time to  posting on Youtube and giving interviews. He publicly stated this week that he will march on Saturday against the “corrupt” government of Santos and the “vomit” of Colombia’s legislators.

Velásquez’s public endorsement of the April 1 march has drawn criticism over the “legitimacy” of a protest in which a former convicted murderer – “Popeye” confessed to killing more than 300 people as a member of the cartel – is allowed to participate.

The march also has the support of evangelical and ultra conservative religious groups.

President Santos has not commented on the march. 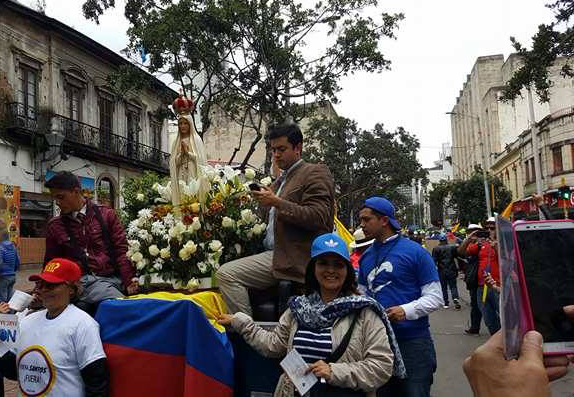