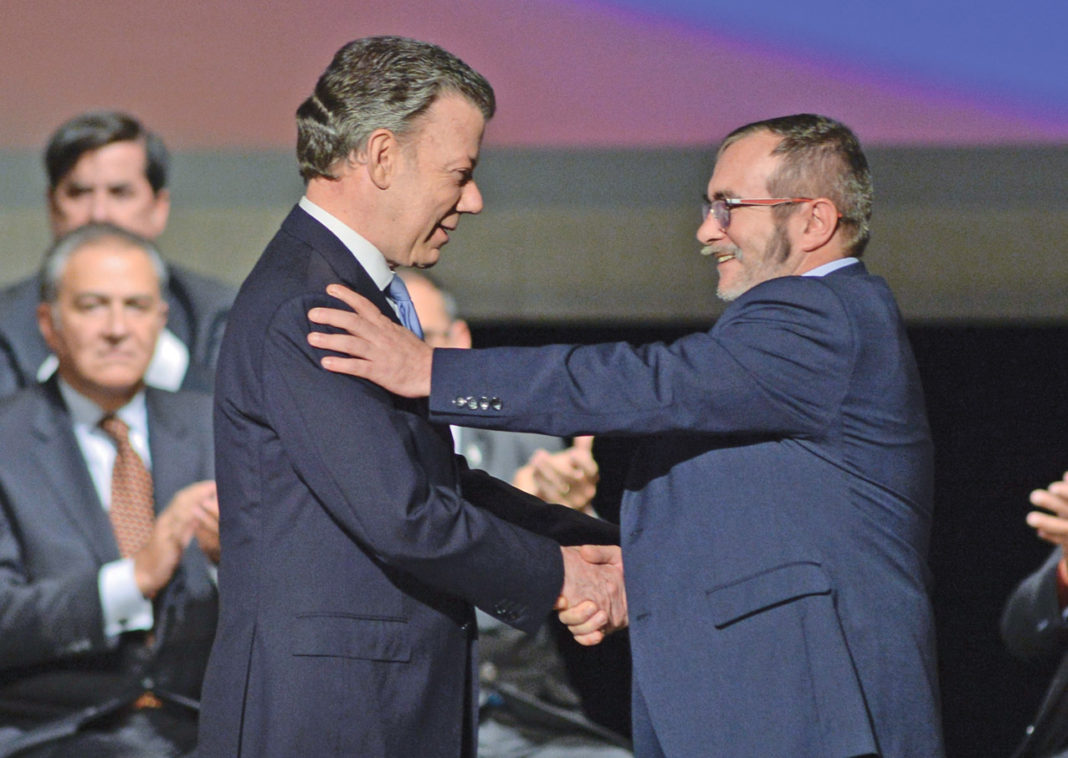 The two-term presidency of Álvaro Uribe Vélez was marked by a catchphrase used widely to describe the actions of the country’s largest insurgency, the Revolutionary Armed Forces of Colombia (FARC). When “narcoguerrilla” began cropping up in press briefings and media headlines, the perception among many Colombians was that the 12,000-strong FARC were no longer an idealist, politically motivated insurgency, but a criminal organization, financing a territorial grab with weapons purchased from dirty money derived from cocaine trafficking.

From defending large coca-growing areas against extensive aerial and ground eradication by the country’s anti-narcotics police to extorting agro-industrial companies, business leaders, and resorting to mass kidnap- pings, FARC was awash in cash. But, the term “narcoguerrilla” was not a new one. In fact, it had been used more than a decade earlier, during the administration of conservative president Belisario Betancur and his Defense Minister, Gustavo Matamoros, to describe a dangerous alliance between the Medellín cartel and M-19 guerrillas. In 1985, this alliance resulted in the storming of the Palace of Justice in Bogotá which claimed the lives of 98 civilians, including 11 magistrates. The current presidential candidate, Gustavo Petro, was an active member of the M-19 during the seige.

When President Juan Manuel Santos was elected in 2010, having served under Uribe as his Minister of Defense, the possibility of a negotiated settlement with FARC became a reality, only after the warrying sides appointed negotiating teams to first meet in Oslo, and then formally sit down in Cuba. During four years, the objective was to forge a “lasting peace” and a momentous one for a country that could not envision the end to a half-century long conflict. Let alone, witness FARC’s entry into political life with 10 Congressional seats guaranteed in the Final Accord.

For many Colombians, seeing field commanders, Jesús Santrich (Seuxis Hernández) and Iván Márquez (Luciano Marín) hit the campaign trail with their newly branded party Common Alternative Revolutionary Force, generated a backlash in public opinion against the accord. Most recently reflected when almost 10 million headed to the polls in legislative elections to vote in congressional representatives, and endorse the official candidates of two internal parties.

The results of the March 11 vote revealed a dramatic shift to the right in Colombia with Iván Duque, the official candidate of Uribe’s Centro Democrático party, most likely to win the May 27 presidential election, according to a poll by Polimétrica that puts the Bogotá economist at 35.4% compared to 24.6% favor the leftist candidate and former Bogotá mayor, Gustavo Petro. Duque has been in a 10-point lead ahead of Petro, and the four other candidates, according to other polls since both candidates were endorsed in democratic consultations.

But FARC’s political future has been thrown into turmoil after the presidential aspirations by the organization’s former chief commander, Rodrigo Londoño, known by his wartime name “Timochenko,” had to be abruptly halted due to heart complications and surgery. Then, a host of attacks by angry mobs when FARC visited towns as part of their campaign agenda. But, by far, the most damaging and schismatic to the line of command was the arrest of Santrich in Bogotá last month.

Santrich was one of FARC’s most outspoken peace negotiators and was set to enter Congress as part of the peace deal. Santrich’s arrest came after the international police entity Interpol emitted a red alert at the request of U.S. authorities for his extradition to face charges of exporting 10 tons of cocaine to Florida. The coca, in question, was shipped after the peace deal had been sealed. As part of the accord, FARC committed themselves to dismantle drug ties, trafficking routes, and support manual eradication efforts in areas where they formerly exercised control.

The blind commander could face life sentence in a New York prison if found guilty. According to the U.S. Drug Enforcement Administration (DEA), Santrich along with three other suspects, operated cocaine labo- ratories and US-registered airplanes to move drugs in coordination with the Sinaloa cartel.

Santrich’s arrest prompted another senior member of FARC, Iván Márquez, to remark on the delicate state of the process. “With the capture of comrade Jesús Santrich, the peace process finds itself at its most critical point and threatens to be a true failure.” Both Santrich and Márquez have seats waiting for them in Congress this July. If FARC’s house is in crisis, then another drug-laced scandal could decimate it entirely, and throw the peace process into deeper chaos.

While Santos has claimed he would not hesitate to sign Santrich’s extradition, the implementation of the post-conflict has faced its own share of corruption scandals after millions of dollars from the Fondo Colombia en Paz (FCP) peace fund haven’t been accounted for. The U.S.$500 million fund was created to implement post-conflict programs as part of the government’s 15-year rural development agenda that includes the destruction of landmines and reintegration of 12,000 former FARC members. The decision to dismiss Gloria Ospina, director of FCP, came after the fund’s main benefactor nations, Norway, Sweden and Switzerland, expressed concern over “a lack of transparency.”

With Santrich accused by the intelligence community as a longtime member of a drug syndicate, Uribé’s favorite catch phrase seems to be ringing louder than before. The Wall Street Journal reported that Iván Márquez, who after Timochenko’s retreat from the presidential campaign, and who has assumed the political leadership of FARC, was under investigation by U.S authorities for narco connections after a cellphone video was intercepted. The Attorney General’s Office denied this allegation, stating that there is no process that implicates the 62-year-old communist.

As post-conflict money evaporates in a corruption scandal of Odebrecht proportion and FARC demands that alleged criminal investigations be tried under the transitional justice system Special Peace Jurisdiction (Jurisdicción Especial de Paz – JEP), the first challenge of Colombia’s next President, will be to salvage a peace process that a majority of Colombians rejected in a nationwide plebiscite in 2016, and one that remains a source of dissent and polarization among the electorate.