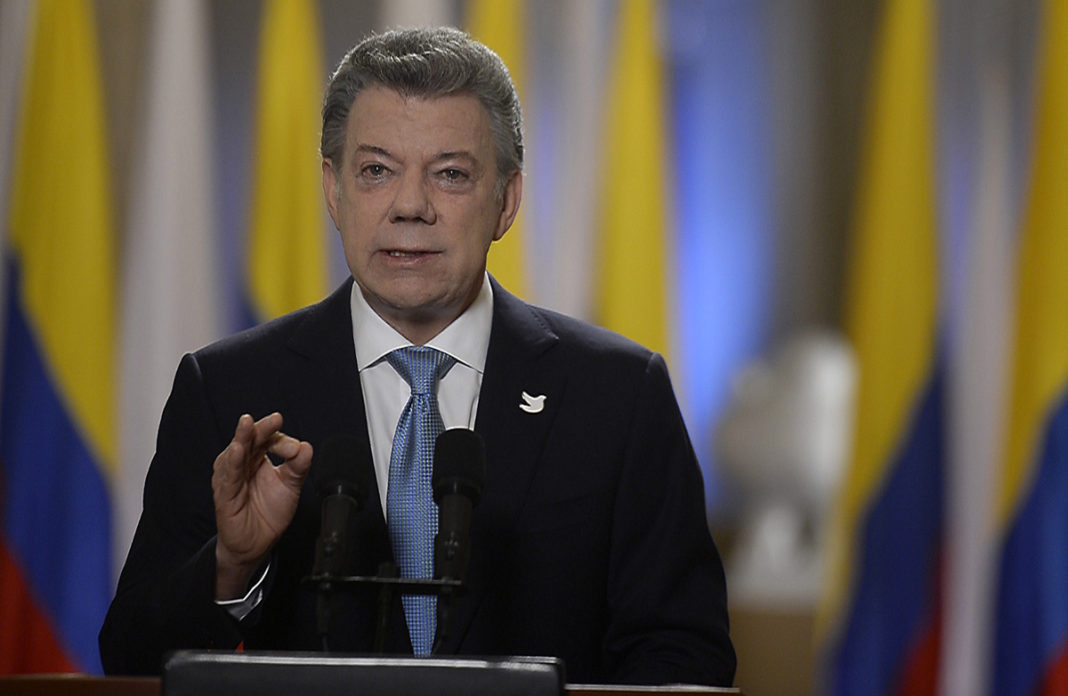 Forty-one days after Colombians voted in a plebiscite to reject a so-called “Final Accord” peace deal between their government and the Revolutionary Armed Forces of Colombia (FARC), the two sides have signed a revised agreement.

Today from Havana, Cuba, representatives from the administration of President Juan Manuel Santos and the nation’s largest guerrilla group announced amendments to the deal that they believe will end more than a half-century of conflict once and for all.

With a new, signed document in hand, Santos, in an televised statement to the country from Bogotá, stressed the need for implementing it quickly. “The ceasefire is fragile,” said Santos. “The uncertainty generates fears and increases the risks of ruining this immense effort.”

How the new deal will be ratified remains uncertain. Santos has previously noted that he has multiple options at his disposal, including directly submitting a new agreement to Congress or calling for another plebiscite. While he offered no clarity tonight on what the next step will be, his silence surrounding another plebiscite is likely telling.

Santos did, however, host an emergency meeting earlier in the day with former President Alvaro Uribe, the face of the opposition campaign to the previous deal, and announced that the concerns of his political rivals have been incorporated into the new agreement. Though the bulk of the original accord remains intact, after weighing more than 500 proposals from stakeholders throughout the country, Santos says that 56 of the 57 provisions in the rejected accord have been changed.

“It is the time for union and reconciliation,” said Santos. “It’s time to leave the divisions behind. It is time to combine wills and join efforts to build peace together.”

Changes made to the peace accord

Key changes in the new accord, according to the Santos administration, include clarifying the punishment that former FARC combatants will receive within Colombia’s justice system. Though the process to identify the severity of crimes committed will no longer include any foreign judges, those who are found guilty — and who cooperate fully with law enforcement — will still only receive a “restriction of freedom” as opposed to jail time.

But the process for designating the locations where they will carry out their sentences (both in terms of designated zones and individual residences) and the oversight of movement restrictions (through a monitoring process and travel authorization) have now been outlined.

Additionally, the judicial process has been altered. Tribunals set up to assess the severity of crimes committed — by guerrilla members and other combatants — will last no longer than 10 years. And cases must be brought within the first two years, a change that is being seen as an attempt to allay fears that this would become a never-ending process in which some would forever have to worry about old crimes being dug up.

Perceived impunity for war criminals who carried out massacres and kidnapped tens of thousands was a key sticking point for Uribe. The revised details may not satisfy those concerns fully.

In the search for justice, FARC must now also present an inventory of assets, including the documentation of weapons, that will be given up. Proceeds of this property will be used for reparations for victims.

To address another controversial component of peace, there are also new, minor limitations placed on the political participation for FARC members as the group transitions from a guerrilla group into a political party. While the new organization can still receive seats in Congress in upcoming elections, 16 congressional seats will be reserved solely for communities who were gravely affected by the conflict and cannot be contested by former FARC members.

Santos admitted that negotiators were unable to make much headway on this issue, the other major point of contention for Uribe and others who voted down the original deal. Negotiators did manage to lower the amount of federal funding that will go to the new FARC political organization by 30%, however, putting it on the same level as other parties.

Larger financial concerns have been amended as well. The revisions ensure that post-conflict investments must be made with fiscal sustainability in mind, and the timeframe for the implementation of dozens of new initiatives to help victims and kickstart development will now take place over 15 years instead of 10 years.

Campaigners against the original agreement suggested that its spending requirements would  put the government on a path to “Castrochavismo” socialism, a local term combining the names of the former leaders of Cuba and Venezuela. The revisions were included to ease fears that Colombia’s public finances could become overly strained while enacting peace investments.

For individuals, the new accord guarantees some level of property protection. While land reform is a key component of modernizing rural areas left behind by the scourge of war, new language expressly respects land ownership, and a new commission will be created to oversee agrarian legislation.

Lastly, FARC pledged to formally cooperate more fully to identify drug-smuggling routes and provide other intelligence in an effort to help law enforcement combat narco-trafficking. The government will now maintain the right to carry out aerial fumigation, and any other means of coca eradication, if it is deemed necessary as well. Crop substitution protocols have also been clarified somewhat.

While Santos and De la Calle had previously told the nation that the rejected 297-page deal signed on September 26 was the best possible agreement they could achieve, today they admitted that the new accord, with input from their political rivals, is an improved document.

“With humility, I recognize that this agreement is better than that of September,” said De la Calle from Havana. He ensured Colombians, however, that the alterations carved out during more than 100 hours of intense, arduous talks do not sacrifice the core convictions deemed essential from the outset of negotiations to end a conflict that has killed some 260,000 people and displaced seven million. “We do not cancel the dream,” he said. “We did not back down on the possibility for a new country.”

Ivan Márquez, the top negotiator for the FARC, also spoke from Havana, saying that the plebiscite results jeopardized five years of talks but taught the guerrillas to better understand the value of pluralism and diversity. Despite the “weak mandate” of the razor-thin vote that rejected the accord — a difference of around 55,000 votes out of more than 13 million cast — it was enough to convince him that more commitments were necessary.

But Márquez says that he and FARC did their best to respond to the demands for peace with concessions and are satisfied with the results. “The only thing that is left is to build a stable and lasting peace,” said Márquez.

Uribe still has doubts. During a press conference tonight in the department of Antioquia, the former president and current senator said that he hopes Santos doesn’t yet consider the new deal to be definitive. The full text has not yet been shared with Uribe or the public, and he believes that a full — but timely — review is necessary by various parties to ensure the accord is acceptable.

Santos said that he would provide the entire agreement to Uribe, as well as former President Andrés Pastrana and others, no later than tomorrow. The full text is also expected to be made public soon.

After the announcement, U.S. Secretary of State John Kerry, who attended the September 26 signing ceremony of the original peace accord in Cartagena, congratulated Colombian leaders on coming together with their political opponents to achieve a revised deal. His pledge of ongoing support from the United States comes just days after the country voted for President-elect Donald Trump to take over the White House in January.

“This agreement has the benefit of many hours of discussion between supporters and critics of the original peace accords,” said Kerry. “After 52 years of war, no peace agreement can satisfy everyone in every detail. But this agreement constitutes an important step forward on Colombia’s path to a just and durable peace. The United States, in coordination with the government of Colombia, will continue to support full implementation of the final peace agreement.”

Ending conflict and uniting a nation

The next steps remain uncertain. Uribe and opponents are unlikely to be entirely satisfied with the substantial — but not wholesale — changes. Certain elements of the deal will still be impossible for many Colombians to accept. The October 2 plebiscite divided the country and incited a level of political chaos and public protest that hasn’t been seen for some time.

But many now have a renewed hope. While still not final, Colombia once again has peace within its grasp. “This new agreement is an opportunity to clarify doubts, to resolve concerns, but — above all — to unite us as Colombians,” said Humberto De la Calle.

“We can not ask you to stop the discussion,” he added. “But we can hope that the great national decision will be to implement the agreements, to overcome the armed conflict, to open the way to reconciliation and to deepen the efforts to achieve an equitable society. That is the challenge now — the challenge for us, for our children, and for our grandchildren.”