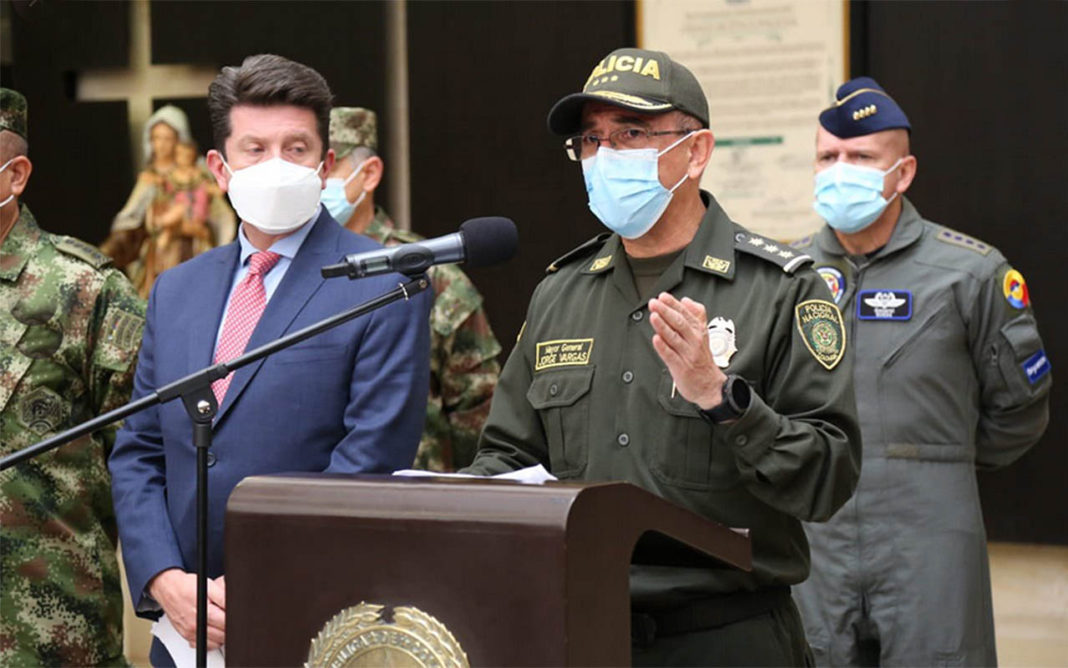 After four days of protests across Colombia against President Iván Duque and the government’s proposed legislation to overhaul the country’s taxation system, on Sunday afternoon, President Duque ordered Congress to remove the Reforma Tributaria to draft a new proposal based on political “consensus.” At the beginning of the first full working day of a week that enters mandatory quarantine as of 8 pm Thursday, Finance Minister Alberto Carrasquilla handed in his resignation. President Duque accepted the end of Carrasquilla’s tenure as a senior member of his cabinet.

In nine years since the last tax reform was passed by Congress – during the administration of President Juan Manuel Santos – the country has faced profound changes and challenges, from expanding demographics, growing social inequality, the influx of 1,8 million Venezuelan migrants, a peace accord with the largest guerrilla FARC and post-conflict financing, as well as rise in new criminal organizations. The outbreak of a global pandemic, that would inevitably impact Colombia’s health system was not expected, and 14 months after the first case was confirmed in Bogotá, the country has registered 2,721.317 cases of infection and 75,165 deaths.

With ICU occupation in hospitals across the country at 82%, and in the Colombian capital at 94%, the National Strike Committee announced that protests will continue despite the government withdrawing the Reforma Tributaria and the on-going health emergency measures decreed by district authorities.

On Monday, truckers joined the protests by blocking roads and setting fire to tires to prevent the movement of essential goods. Representatives of the major agricultural associations called on demonstrators to allow the circulation of perishables that need to reach distribution centers in large cities.

In Cali, the scene of much of the looting and rioting, FENAVI, the country’s poultry association warned that up to 60 million chickens could die if trucks are not allowed to circulate freely. Cali, the departmental capital of Valle del Cauca, is also the gateway to the country’s largest port Buenaventura and where goods are being blocked by transporters. Bruce Mac Master of the National Association of Industrialists (ANDI), warned that almost half of all trucks moving oxygen tanks for hospitals are stuck with road blockades.

While marches defy inclement weather in the central regions of the country, Monday’s protests in Bogotá were conducted peacefully, but at the same time, generated mobility gridlock given that the mass transit system TransMilenio was forced to suspend the service of 200 buses and close 41 stations after they were attacked by vandals. Former Bogotá Mayor Enrique Peñalosa denounced the situation in the capital, taking to Twitter, stating: “Leaving tens of thousands of working citizens without transportation, as is happening now in Soacha, is bullying. Many of the commuters are women who must go to see their children. They are forced to walk for hours amid anxiety.”

Mayor Claudia López, along with Medellín’s Daniel Quintero both remarked they do not require the “military assistance” offered to them by President Duque to maintain public order. López downplayed the extent of vandalism to “a dozen” locations and affirmed that the capital has not registered a single fatality during the mass mobilizations. Colombian Defense Minister Diego Molano also guaranteed that the Army will continue to assist in maintaining land and air corridors to deliver much-needed coronavirus vaccines to cities. “Military assistance allows us to guarantee that food, medical supplies and fuel are not lacking. Airports, imports and exports, as well as road infrastructure are protected,” he added.

Molano also gave the balance of destruction that targeted 94 banks, more than 200 shops, toll booths, national monuments and government buildings. According to the Ministry, riots injured 540 police officers and 306 civilians. One member of the force has been killed in the confrontations. Sargeant Jesús Solano died from multiple stab wounds while confronting a gang of vandals in Soacha, a neighboring city south of Bogotá. “Colombia faces the terrorist threat of criminal organizations, disguised as vandals, intent on harassing and destabilizing cities such as Cali, Bogotá, Medellín, Pereira, Manizales and Pasto,” remarked Molano. National Police chief, General Jorge Vargas, activated on Monday the Special Task Force against Vandalism and Related Crimes to locate and capture the perpetrators of crimes against public and private property.

Another victim of Paro Nacional is Nicolás Guerrero, an aspiring artist from Cali, who died Saturday evening after being shot during a demonstration in the city of Ibagué. Guerrero is a relative of Jorge Iván Ospina, Mayor of Cali. The death of the 21-year old student from a firearm allegedly drawn by a police officer is tragically one of 19 confirmed civilians deaths between April 28 and May 2. Molano sent condolences to both families (Solano and Guerrero), expressing that the National Police have received instructions to move forward “immediately” with investigating these crimes and accounts of police brutality. Human rights organizations have denounced more than 800 arbitrary detentions and 1,200 cases of political violence by security forces. And despite the ongoing political crisis, Monday saw a deceleration in new coronavirus cases – 11,599 – but also registered 464 additional fatalities. The country managed to administer a total of 5.2 million vaccines, with Bogotá accounting for one million. “We are witnessing a decline in deaths from the virus, and this can only be explained in one word: vaccines,” stated López.

The tragedy of Bogotá’s missing girls