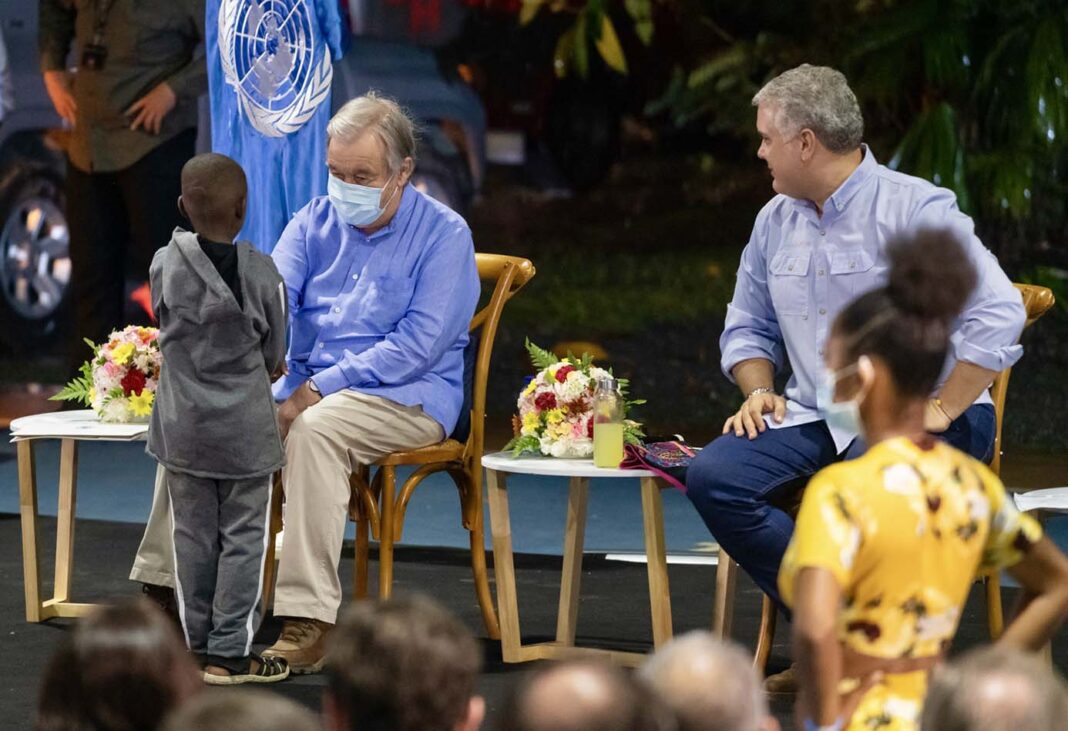 At the five-year juncture since former President Juan Manuel Santos signed the Final Accord with the FARC’s “Timochenko” on November 24, 2016, Colombia’s Iván Duque reiterated Tuesday one of the key messages of his inaugural address to the nation: “We must continue to construct Peace with Legality.”

President Duque’s statement, made during a visit to Apartadó with the Secretary General of the UN António Guterres, who is visiting the country to mark an anniversary that ended more than a half-century of internal conflict, was accompanied with an address to the victims of violence: “I want to thank you for your generosity, sense of forgiveness, we will always be on your side.” President Duque and Guterres then held a minute of silence for the more the 260,000 victims of the armed conflict.

“When we sow in each child the notion that there is no justification for violence, we are guaranteeing the construction of the peace of our future,” added President Duque.

Five years after 13,000 FARC combatants began their reincorporation into civilian life, and started a weapons hand-over supervised by the UN’s Verification Mission to Colombia, seven of FARC’s former peace negotiators and members of the ex-Secretariat have admitted responsibility for committing War crimes and Crimes against Humanity before magistrates of the Special Jurisdiction for Peace (JEP).

The JEP tribunal was established as part of the Final Accord to investigate the most serious and representative crimes committed during the armed conflict and guarantee the rights of victims to reparation and non-repetition. As an independent court with powers to deliver sentencing to those who implicated in kidnapping, child recruitment, forced disappearances and displacement of civilians, on Wednesday, Presidents Duque, Santos, the UN’s Guterres and FARC’s Rodrigo Londoño (alias “Timochenko”) joined JEP chief magistrate Eduardo Cifuentes to commemorate a process that continues to polarize Colombians. “Five years ago, we signed the end of a conflict of 60 years, one which resulted in immense pain to millions. We must persevere on the road to peace and reconciliation,” remarked Santos.

In a direct rebuke of the Nobel Peace Prize Laureate’s affirmation that the Final Accord with FARC marked the “end of a conflict,” former right-wing President Álvaro Uribe (2002-2010) delivered a letter to the Secretary General expressing in the opening paragraph: “There has not been a Peace Accord, just the fracture of National Law, a challenge to International Law to grant total impunity and political representation to persons responsible for atrocious crimes, such as kidnapping and child rape.”

President Uribe’s 26-point letter was released days after his political party Centro Democrático chose Oscar Iván Zuluaga as the official candidate in the 2022 presidential elections. Uribe blames the Final Accord for a surge in drug trafficking, illicit crops and illegal armed groups, including FARC dissidents, fighting for control of lucrative narcotics routes. “The Agreement and corresponding measures of the Government at that time, such as prohibiting aerial fumigation, left the current Government in serious difficulties to eradicate illegal crops. And with the added risk of anti-personnel mines that have killed so many who participate in manual eradication,” affirms Uribe.

FARC’s former maximum commander, Rodrigo Londoño, struck a conciliatory note admitting before the magistrates, President Duque, President Santos and the Secretary General that “these years have not been easy due to the incessant attacks against the Accord, and lack of will by the State for its comprehensive implementation. Even so, we declare that nothing and no one will be able to undermine our conviction that the path we undertook is the correct one.”

The UN’s Secretary General concurred with Londoño, highlighting that “the signing of the Peace Agreement – 5 years ago today – generated hope and inspiration in Colombia and the world. After five decades of conflict and suffering, we have a moral obligation to ensure that this peace process is a success.” 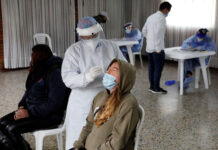