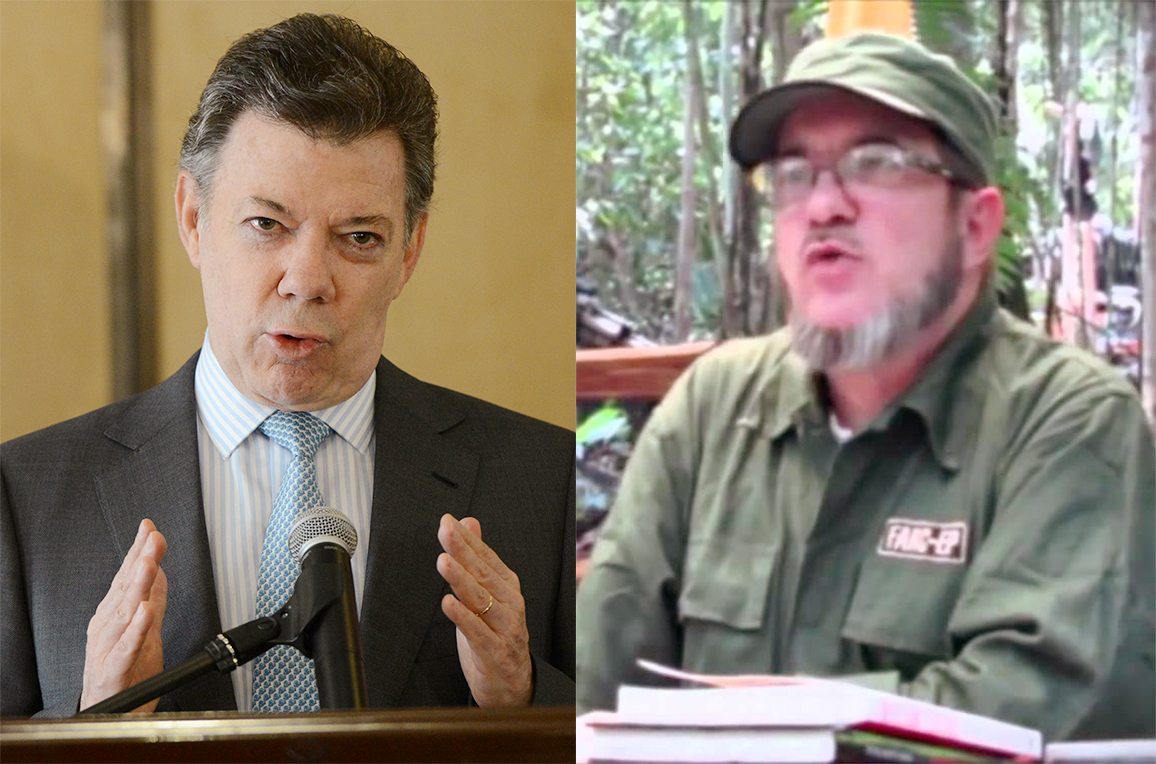 [dropcap]T[/dropcap]wo days after Colombian President Juan Manuel Santos met his Venezuelan counterpart, Nicolás Maduro, in Quito, Ecuador, to defuse the month-long border crisis, the peace delegates of the Revolutionary Armed Forces of Colombia (FARC) and the Colombian government announced from Havana, Cuba, that they had reached an historic agreement on transitional justice.

The announcement of the terms of the accord was immediately followed by a sudden trip of Santos to the island where met with the FARC’s maximum commander, Rodrigo Londoño, alias “Timochenko” and which confirmed that a definitive peace agreement between the government and the oldest rebel group on the continent had yielded results.

Santos hinted Tuesday that a major development had taken place in Cuba, saying that “not everyone in the world will be content, but I’m sure in the long run we’ll be much better off.”

[quote]”Not everyone in the world will be content, but I’m sure in the long run we’ll be much better off.”[/quote]

The FARC’s chief negotiator, “Iván Marquez”, stated that his organization “was ready for the transition” from rebel group to political party. The Colombian conflict during more than a half century has claimed the lives of more than 220,000 and displaced millions.

The official statement from FARC and the Colombian government was read by representatives of the guarantor nations, Cuba and Norway starting 5:30 pm. “We are building a system of justice, which includes a tribunal of Colombians and foreigners to reach the truth and put sanctions on those who committed the worst acts of the conflict”  says the opening statement. “There will be no amnesty for crimes against humanity.”

The FARC signed the official statement in which they committed themselves to surrender their weapons within 60 days of a final agreement.

President Santos and alias “Timochenko” addressed Colombians on the implications and implementation of the transitional justice agreement.”I have come here to meet with “Timochenko”, to make sure we have no more victims from violence” said Santos in his opening statement. “This is the end of the longest conflict of our continent.”

“Timochenko” greeted Cuban President Raúl Castro outside the Convention Center with a military salute. This is the first time a ruling Colombian President had met with the maximum leader of FARC.

Since the peace talks began Colombians have been deeply divided on how FARC should respond for crimes committed or if the senior rank-and-file should pardoned by the state as a guarantee for the success of the talks and an eventual peace. A definitive peace agreement signed between both parties in Havana will have to be put before the Colombian people for ratification in a referendum.

The transitional justice agreement closes a difficult chapter of the peace agenda, which began in Oslo in 2012 and despite difficult setbacks, such as an attack by the FARC against an army garrison in May, and subsequent aerial bombardments by the army against rebel camps, regained momentum at the end of summer.

Before departing on his first official visit to Cuba and the U.S., Pope Francis begged the Colombian government and FARC to not repeat the failures of the past and end  the “long night of pain and violence”. Pope Francis prayed for all the efforts being done to achieve a fast and long-lasting peace in Colombia, and one which respects the institutions, as well as national and international laws. “We have no right to permit ourselves another failure in the road towards peace and reconciliation”

The Vatican ruled out that the Argentine-born pontiff  would meet with representatives of the Colombian government and rebels in Cuba.

Santos departed the Colombian capital, Bogotá early from the Air Force base of Catam accompanied by leftist Senator of the POLO party, Iván Cepeda and the conservative former minister Alvaro Leyva, who helped forge the peace agreement with the M-19 guerrilla back in 1989. At 4:45 pm Santos met with his peace team, the government’s chief negotiator Humberto de la Calle, the High Peace Commissioner Sergio Jaramillo and Cuban President Rául Castro.

In a tweet to the Colombian people, President Santos announced Wednesday that “peace was at a point of no return,” resulting in speculation that an historic announcement after 3 years of talks could quickly end more than 50-years of internal conflict.

After his historic encounter with “Timochenko”, Santos heads to New York for the General Assembly of the United Nations and where he will address world leaders on the rapidly-changing events of the ongoing peace process.