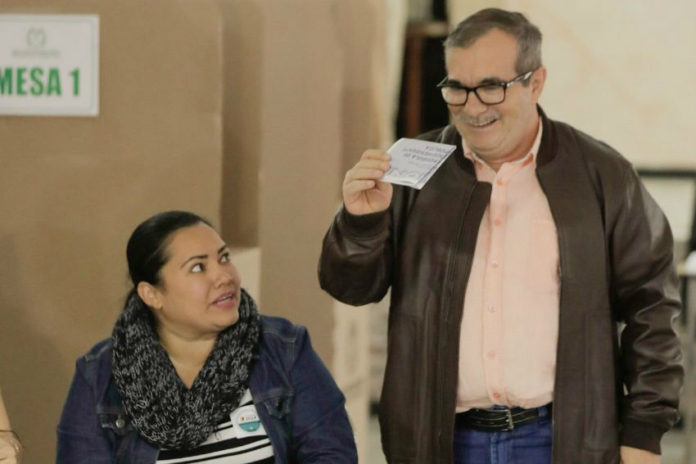 The former maximum commander of the Revolutionary Armed Forces of Colombia (FARC) guerrilla, Rodrigo Londoño, best known by his wartime alias “Timochenko” cast his vote Sunday, referring to the process as “emotional.” Now rebranded as the Common Alternative Revolutionary Force, FARC has retained its controversial acronym but does not have an official candidate in the 2018 presidential elections. Londoño was forced to withdraw form the race after he fell ill with heart complications and required open heart surgery.

In a tweet moments after he cast his first ballot for president of Colombia as a demobilized combatant, Londoño remarked: “It is very exciting to exercise the right to vote, for the first time, as a result of the path we decided to build with all Colombians. The peace is the way.”

FARC signed a historic peace agreement with the Colombian government in November 2016, ending more than a half century of internal conflict, in which 260,000 people were killed and more than six million displaced. According to the accord, FARC is entitled to 10 Congressional seats – five seats in the House of Representatives and five in the Senate.

Addressing reporters after he left a voting station, the 59-year old communist who assumed FARC’s maximum leadership after the group’s predecessor, alias Alfonso Cano was killed during an ambush with the Colombian army, remarked: “I believe that every change presents fears, but also expectations. I believe Colombians want to journey toward peace, travel the path of reconciliation.”

Colombia’s passport recognized as Safest in the World by experts