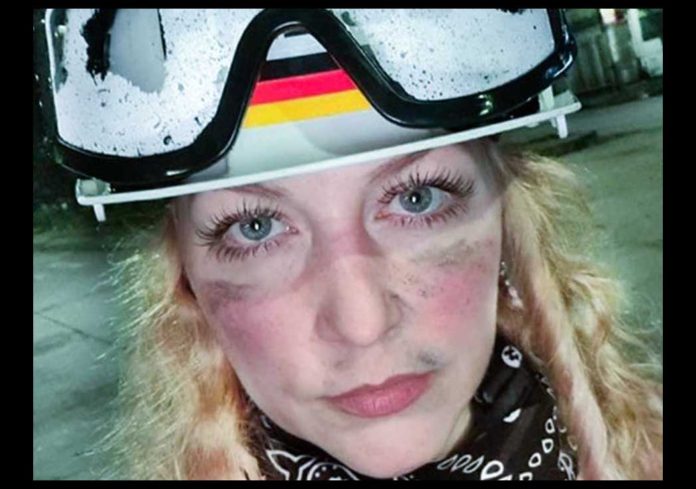 Rebecca Sproesser wasn’t exactly hitting the slopes in the southwestern city of Cali when she posed next to “first line” defenders in ski goggles, neckerchief and hard hat. The 34-year-old German, who entered Colombia on March 15 was given by immigration authorities a 90-day tourist visa, standard issue to most foreigners entering the South American nation.

But just over a month after she arrived from Frankfurt, Sproesser found herself engulfed in anti-government protests that erupted on April 28 with the declaration of the National Strike – Paro Nacional. Instead of maintaining a low profile during the remainder of her visit in the capital of salsa where she wanted to take up dance, or staying clear of anti-riot water cannons, the activist joined a first line – primera linea – in anti-government protests. The so-called first lines are manned mostly by youngsters to defend road blockades that have resulted in food shortages and medical missions trapped behind makeshift barricades.

Sproesser’s social media posts showed that she was hardly a bystander in the roiling unrest, and while she could legally remain in the country as a tourist until July 15 (if granted an additional 30 days extension), interviews with local media and selfies taken amidst the riots raised the attention of Migración Colombia officials. In a statement released Tuesday, hours before the German citizen was deported, the country’s migration entity based its expulsion order on the fact that Sproesser “was carrying out activities that had nothing to do with her tourist status, and which could affect the civil order and peace.”

The decision by the Colombian Foreign Ministry to bar the entry of a foreign national for 10 years (based on direct involvement with a movement that has torched police command posts, kidnapped officers and, in Bogotá, decapitated a civilian after one first line strung a metal cable across a busy avenue) has never been taken lightly.

For many Colombians, who witnessed during months of civil unrest how first lines smashed public transportation, vandalized road infrastructure, and in hordes lunged police with potato bombs, Sproesser’s deportation could be the first of many involving tourist-agitators-turned-communicators. “I wonder how long one would last before being arrested by the NYPD if one graffitied Saint Patricks with #NosEstanMatando (They are Killing us),” remarked Luis Sanchéz to The City Paper, and echoing a similar sentiment by Blu radio journalist Santiago Ángel: “If a foreign citizen in any country engages in political activism alongside those involved in acts of violence against the state; some with criminal records, not only would he/she be deported, but first, put in prison.”

In an underhanded manipulation of facts that Gustavo Petro has mastered during the Paro Nacional, the left-wing Senator referred to Sproesser as a victim of media “stigmatization” and “foreign journalist expelled worthy of a dictatorship.” The German tourist was not in Colombia with any accredited news organization, nor did she possess a “Temporary” or Residency” visa as a Journalist.

And in a bizarre end to her ill-fated Colombia tour, Sproesser denounced that days before she was contacted by Migración Colombia, an armed assailant fired at her from close range, and homicide foiled after a friend received 13 bullet wounds to his head and chest. “I only received scratches from the projectiles that came out of his body,” stated Sproesser, adding that “given the whole process of human rights, it was very clear that this was not a robbery.” Sproesser now has plenty of time from Colombia to reflect on the series of events that led to her deportation, and true meaning of what is means to be a guest in a host nation. Lesson that for all extranjeros is equally important.