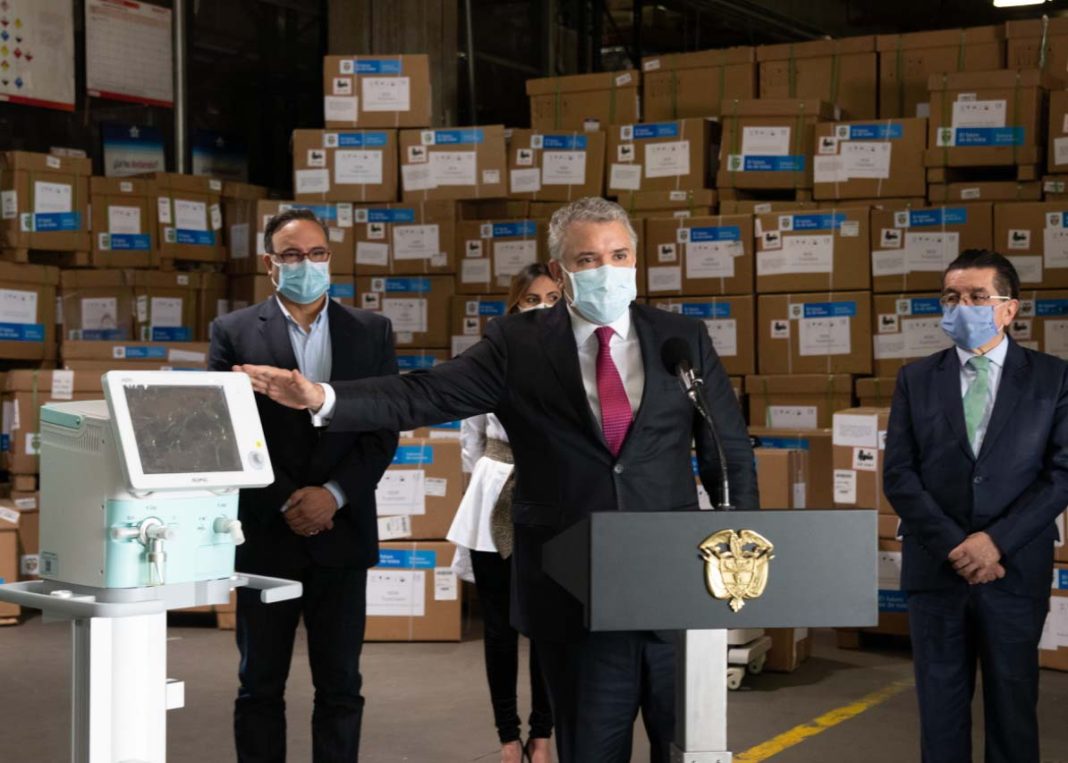 Bogotá Mayor Claudia López took to the airwaves on Tuesday morning to disqualify President Iván Duque and the national government’s commitment to hand-over 200 intensive care ventilators to hospitals in the Colombian capital and hours before a meeting with Minister of Health Fernando Ruíz.

After announcing Friday that the city’s nine million inhabitants should be prepared to be placed under strict lockdown – by requesting this decision in a formal letter to Ruíz – and ultimate decision that rests with President Duque, Mayor López threw the first stone on BluRadio with the double-edged statement: “The government better not come with arrogance and say: “too bad, you die.” López then went on the claim that “the government hasn’t even thanked citizens for being under quarantine,” despite the fact that Duque repeatedly thanks Colombians, during his evening address to the nation for their patience with a quarantine that began on March 25.

After López claimed that “we don’t need ventilators at funerals,” among the high-ranking government officials to respond to this sardonic comment was Diego Molano, director of the Presidential Administrative Department, reminding Bogotá’s highest authority that “ventilators aren’t negotiated by shouting, rather by management and investment.”

As López raised the verbal temperature against a right-wing government she views with disdain and contempt, President Duque was seen Tuesday afternoon in a warehouse filled with brand new ventilators and accompanied by Minister Ruíz and Luis Guillermo Plata, the country’s COVID-19 Emergency Manager. “Colombia has been facing the COVID-19 pandemic with a concept of working as a team. We all have to put on our country’s shirt and work with a single purpose; there is no room for individual leadership,” he said. “For many, getting ventilators seems like an easy and immediate task, but it has not been like that. The world until the pandemic, produced between 55,000 and 60,000 ventilators per year. Demand, at this moment, could exceed three or four million.”

Mayor López received 125 ventilators last week from the national government and from the most recent shipment, Bogotá completes an additional 305, reducing ICU dependency below 75% – or López’s Red Alert threshold. Ventilators are also destined for Colombia’s coastal cities, among the worst affected by coronavirus.

While other mayors of the country’s large cities also wait for life-saving medical equipment without resorting to political bullying and media outbursts, President Duque confirmed the purchase of 4,658 ventilators, putting Colombia as “one of the leading countries in Latin America with ventilation capacity for critically ill patients per million inhabitants.” The U.S Government agency USAID pledged 200 ventilators on Tuesday.

At the closure of June, Colombia has 877 ventilators with 2,094 scheduled for July and 975 for August.

As journalists followed the trail of Tweets on Tuesday by López, the country’s Statistics Department – DANE – put unemployment for May at 21,4% after 4,9 million formal workers lost their jobs. These figures do not take into account the millions of informal workers who, after more than two months of strict quarantine, also lost their livelihoods.

While López would have had no qualms in placing Bogotá under a strict lockdown until July 15 – or longer – on Tuesday, the city registered 697 cases of COVID-19 after the National Institute of Health processed 17,282 PCR tests. Bogotá’s additional new cases are the lowest in more than two weeks. Colombia added 2,803 cases putting the new national total at 97,846 since the first case was confirmed March 6. From 97,846 cases, almost half of all COVID-19 patients – 42,073 – have recovered, putting active cases at 52,279.

The death toll stands at 3,334 after 111 fatalities were registered in hospitals. Bogotá confirmed 16 deaths on Tuesday. Colombia registers mortality at 63 per million inhabitants.

Colombia has an infection rate of 1,800 per million inhabitants, among the lowest in South America. “A fundamental aspect of keeping these encouraging trends is civic culture,” stressed President Duque. As another deadline approaches for the next hand-over of ventilators on July 15, Bogotanos can only hope that pandemic populism doesn’t bankrupt the aspirations of millions to return to work and regain personal freedoms.

Working to tap a catastrophe at Colombia’s HidroItuango dam