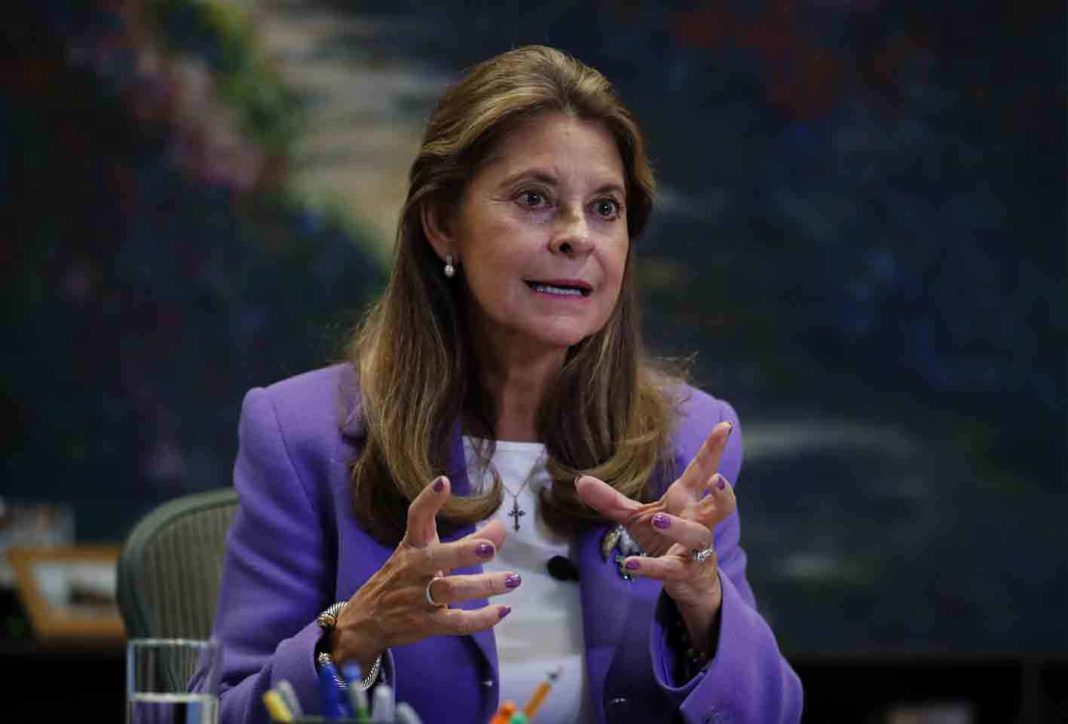 Colombian Vice-President Marta Lucía Ramírez assured Tuesday that the government has asked the Biden administration to lend vaccines to accelerate the immunization process and economic recovery of the country, hit in recent weeks by anti-government protests, illegal road blockades and civil unrest.

“What President Iván Duque had asked for is that the US lend us some vaccines that we will return once the pharmaceutical companies deliver the shipments,” said Ramírez during a her first trip to Washington as Chancellor. Ramírez also highlighted that the national government has purchased vaccines for 35 million people (some 70 million doses). “Colombia needs to accelerate its vaccination plan and regain normality, work, jobs” remarked the diplomat, alluding to the protests that erupted a month ago and have resulted in 43 deaths.

In a meeting organized by the Atlantic Council, Ramírez explained that 8 million Colombians have already been vaccinated, but that it is necessary to reach heard immunity with 35 million. She recalled that the US Government announced that it will donate 80 million vaccines to poor and developing countries, and any loan is “welcome,” given that ICU occupation in Colombia has reached maximum occupancy with 8,000 critically-ill patients currently receiving treatment for COVID-19.

A government delegation also met on Tuesday with Republican Senator Marco Rubio who in a message on his Twitter account assured that Colombia is the “most important US ally” in the region. Rubio denounced that “there are elements from abroad, from the left,” among them Cuba and Venezuela, that seek to “destabilize” the Duque administration and use these protests to “advance support for candidates in future elections.”

In Bogotá, with ICUs at 96%, the coronavirus mortality rate of adults age 70 or over has reduced by 50% during the third peak of the pandemic – the longest, and most lethal, since the start of the national health emergency. “In terms of deaths, it has been possible to document a 50% decrease in deaths from COVID-19 compared to the first peak,” remarked Alejandro Gómez, the district’s Health Secretariat and Bogotá’s interim mayor while Claudia López was self-isolating from coronavirus. Since the outbreak of the pandemic in March 2020, some 50,000 persons over the age of 70 have tested positive for coronavirus and 8,934 of them have died from the disease, a figure that represents half of the more than 16,000 deaths from COVID-19 that have been confirmed in the Colombian capital.

The epidemiological surveillance team of the Ministry of Health also found that with the vaccine roll-out there has been a 20% decrease in active cases among senior citizens. Health Minister Fernando Ruiz also noted that in some regions, among them Bogotá, Cundinamarca, Boyacá and Nariño, are in a “double third peak of contagion,” attributable to new variants of the virus and large agglomerations generated by the national strike.

On Tuesday, Colombia registered 21,181 additional cases putting the national total at 3,270.614. The country also confirmed 459 deaths from the virus raising the toll to 85,666. The city that reported the highest number of new infections is Bogotá with 7,889.

Canadian gold mine workers targeted by armed group in Antioquia