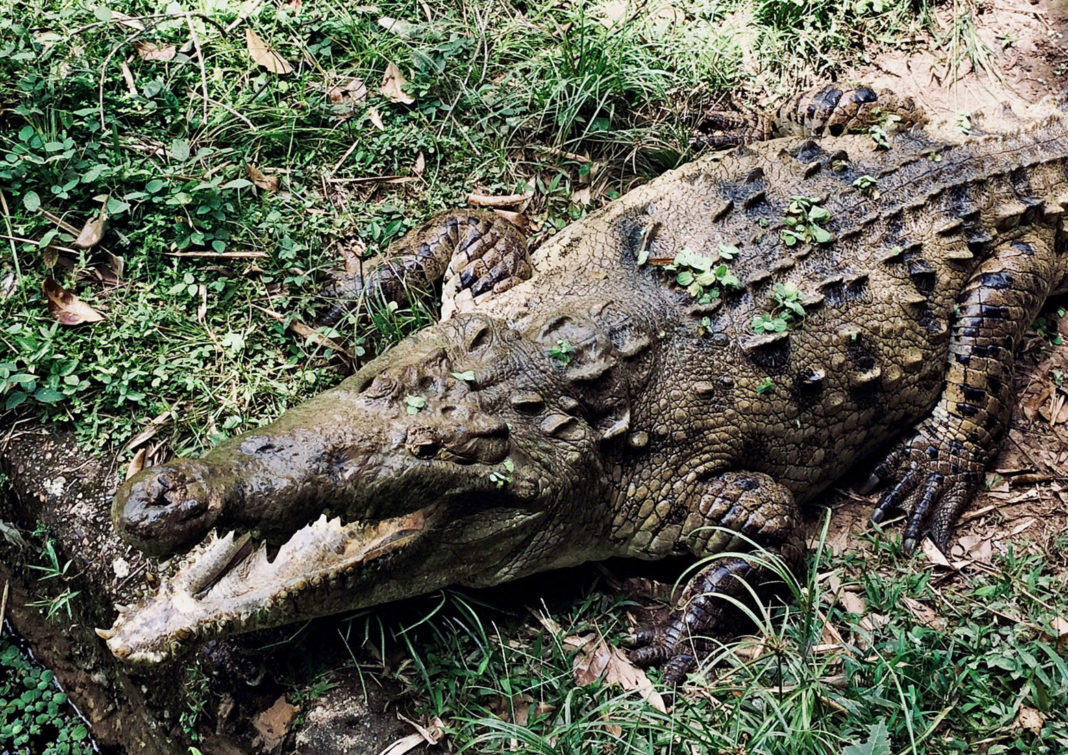 The morning sun beats down heavily as the bus meanders its way up the mountain road towards an ecological park Ciudad Reptilia. For more than two decades, Reptile City has been dedicated to the conservation and breeding of rep- tiles in danger of extinction – particularly crocodiles, spectacled caimans and boa constrictors. Concealed by a thick tropical forest near the popular resort town of Melgar, this nature re- serve with dangerous carnivores is not something you would expect to find just two hours from Bogotá.

The bus pulls up to the entrance, and we begin the tour with an easy, 20-minute walk through a lush forest. Butterflies and frogs cross our path as we traverse the Guacamaya stream that provides fresh drinking water to local communities. I was glad for my hiking boots as the previous night’s rain made the path slippery. At the visitor’s educational center we are greeted by the park owner and lead veterinarian Leonardo Orjuela. Curled up on the table next to him is a 3-meter long boa constrictor whose composure is unnerving. His leathery skin is “pure muscle” (puro músculo) and surprisingly warm to the touch. The most courageous of the group have the chance to drape the docile snake over their shoulders.

Aside from conserving animals, Leonardo and his volunteers have also managed to recuperate the surrounding tropical rainforest destroyed by decades of cattle farming. By restructuring the soil and bringing back plants and trees typical to this ecosystem, they have created the only flora and fauna sanctuary in the region. But, undoubtedly, the highlight of Ciudad Reptilia are the 400 large reptiles that even though they are enclosed, are protected by a natural habitat. Besides attracting tourists, the park’s proximity to Bogotá makes it ideal for university students wanting to investigate reptilian lifecycles and behavior.

With snake selfies done, we make our way down a wooden path to a large enclosure where caimans lazily are eyeballing us. It’s feeding time, and as quick as lighting, the amphibious carnivores frantically crawl out of their murky pond, grabbing the closest piece of meat. Similar in appearance, though not always in size, caiman and crocodiles are often mistaken for each other. Our guide tells us that the differences are evident in their nose and eyes. While crocodile snouts are narrow, pointy and V-shaped, a caiman’s resembles a wide U. By carefully observing their eyes, one can also spot the difference.

Leaving the caimans behind, a bridge passes over a lagoon where several crocodiles are creepily camouflaged within a mangrove. The bridge connects us to the star attraction of the park: the jumping crocodiles. Standing on a platform positioned over the lagoon, our guide leans over and dangles a piece of rope with bait tied at the end. A second is not enough to focus our cameras, when a crocodile leaps out of the water, exposes its entire upper body, grabs the food and crashes back down. The splash is followed by an alarming deep clapping sound as its mighty jaw shuts. I’m glad to be standing 5 meters above it.

The excitement of seeing one of the world’s largest reptiles is followed by the park’s caiman hatchery. With his mouth gently tied shut, the guide carefully holds the 80 cm-long caimans for us to feel. Its skin is rough, scaly and extremely tough – as if clad in bulletproof armor. The tour ends with a visit to the tortoises that are seized by authorities as house pets. The mistreated will never be released back into the wild.

According to the Humboldt Institute, Colombia is the fourth country in the world for the highest numbers of reptile species after Australia, Mexico, and Brazil. The Institute reports that 9% of the country’s reptiles are endangered. With hectares and hectares of natural habitats disappearing due to the negative impact of human activities, Eco-parks such as Ciudad Reptilia are very necessary for the fight for conservation. The park’s entry ticket includes a donation in order for the volunteers to continue with their work and purchase the copious amounts of food gigantic reptiles require every day.

To sign up for the four-hour tour, head to Calle 8 No.17-2 in Melgar and look out for the Ciudad Reptilia sign. The tour costs $25,000 per person and includes transport.