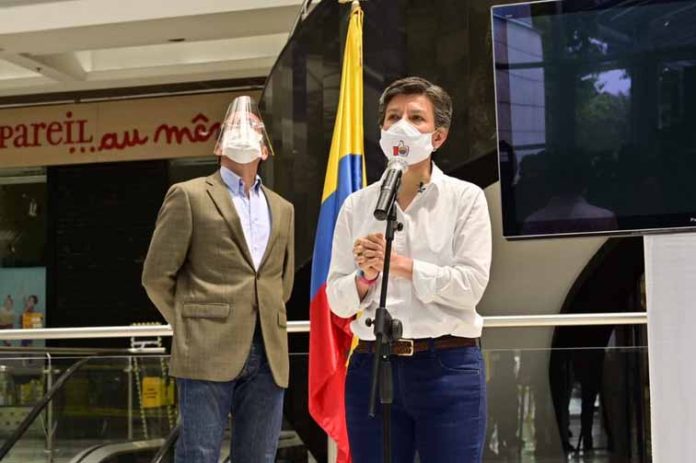 Bogotá Mayor Claudia López appeared on a collision course with Colombian President Iván Duque after announcing that on Monday June 15 (date in which quarantine in the city is scheduled to be lifted), there could be “new measures” given that the capital’s intensive care capacity has reached 50% with COVID-19 patients.

Even though President Duque has set the official timeline for lifting quarantine nationwide for July 1, when almost every sector of the economy is authorized to resume work, Mayor López stated in mid-March – as cases in the country were less than 200 – that should ICU capacity surpass 50%, the city would enter lockdown – or Orange Alert; and should the district’s hospital capacity reach 70% with coronavirus, Bogotá would be placed under Red Alert.

In a Twitter post on Thursday, Mayor López outlined occupancy of ICU wards during April (20%-29%) – a month in which Bogotá’s 10 million inhabitants were placed under strict lockdown –  most of May (30%-39%), when the manufacturing and construction sectors were decreed back to work, and May 23 to June 10 (40%-48%), days in which residents have regained mobility and more freedoms.

Announcing that on Monday “new measures” could go into effect, Mayor López once again triggered alarm bells of another extension to quarantine despite numbers of COVID-19 cases in the city maintaining a steady course – with a high of 443 on Monday and 406 on Thursday. The city’s total coronavirus cases stand at 14,537, three months since the first case was reported.

While the national government will maintain the Health Emergency until August 31, Decree 749 of May 28, has guaranteed a return to productivity for 43 sectors until July 1, when even more sectors are expected to resume productivity.

Bogotá has a capacity of 722 ICU units with 368 currently in use, according to the district’s Health Observatory.

Fatalities on Thursday saw a slight decrease to 55 after 61 on Wednesday and 64 on Tuesday. Of the day’s additional deaths, four occurred in Bogotá while 35 were in coastal cities and towns, including Barranquilla and Santa Marta. Cartagena and Medellín did not report additional victims of coronavirus.

Should Mayor Claudia López extend quarantine past June 15 she would require authorization from the government of President Duque and situation that would adversely impact the notion that both administrations are on the same course to reopen the country’s largest city. Mayor López did state in her Tweet, that “new measures” would be announced with the Ministry of Health.