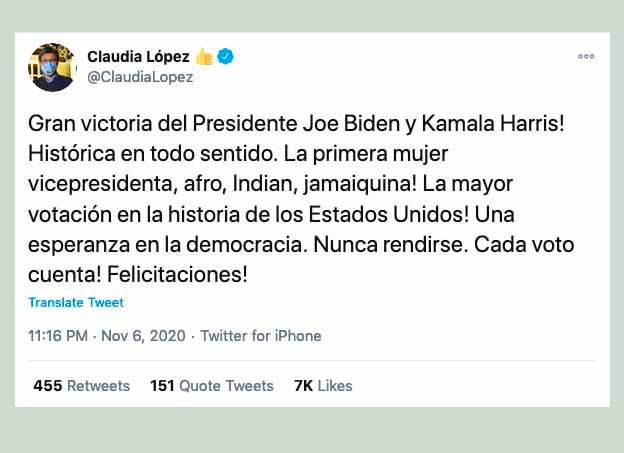 The restraint and caution shown by leading media organizations as thousands of mail-in and provisional ballots in five battleground states have yet to be counted did not deter Bogotá Mayor Claudia López in calling the U.S Presidential election. In a Tweet released late on Friday, as the Democratic candidate rallied citizens for “patience” until each final vote has been tallied in Arizona, Nevada, Georgia, North Carolina and Pennsylvania, López asserted: “Great victory of President Joe Biden and Kamala Harris!”

López’s statement –  which marks a first for a non-U.S politician to side-step a foreign electoral process by proclaiming the Biden-Harris ticket as “hope for democracy” – is nothing short of imprudent, even as both candidates admit the final results remain “too close to call.”

Representing the second-most important political seat in Colombia, López’s Tweet received its share of criticism from followers reminding her that the final vote count could take several more days and not to opinionate over the outcome of a foreign nation’s political future.

President Iván Duque’s silence on the cliff-hanger election has been accompanied by those of other world leaders, including the U.K’s Boris Johnson, Germany’s Angela Merkel and Canada’s Justin Trudeau, even as millions of Colombians residing stateside voted in their respective states.