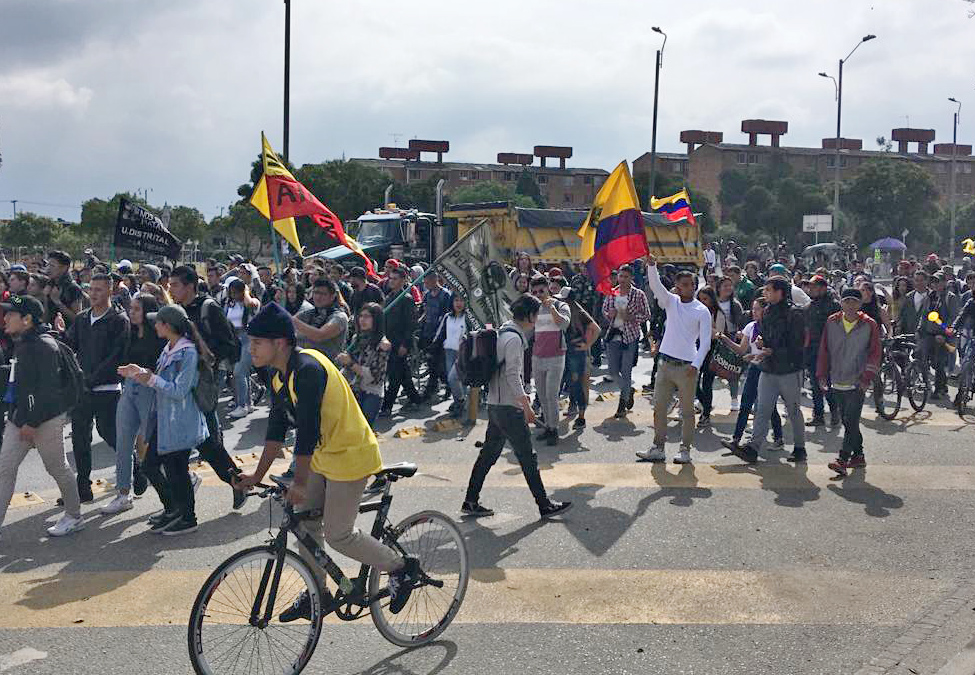 The first National Strike day of 2020 began with clashes between the National Police’s Anti-Riot Squad – Esmad – as masked protestors attempted to set fire to garbage containers in front of the Suba TransMilenio station in the northwest of the Colombian capital. As marchers took to the main arteries of Bogotá, blocking Calle 80, Calle 26 and Carrera Séptima, the protests during much of the morning were conducted in peace, with Mayor Claudia López taking to social media to highlight that despite the localized confrontations during the morning rush hour, the “protocols” were being enforced and demonstrations accompanied by the district’s Coexistence teams and volunteer pacifiers.

As an estimated 12,000 marched towards nine concentration points, among them, the centrally-located Plaza de Bolívar where a carcerolazo is planned for 5:00 pm, members of the National Police were pelleted with rocks by students in the western part of the city near the Banderas landmark. Vandals proceeded to smash the windows of several TransMilenio stations and financial institutions along Avenidas Las Américas and Boyacá.

At 2:00 p.m, protestors also attacked the police on Avenida Las Américas, forcing the Mayoralty to regain control of the situation with its “last resort protocol” –  Esmad. An anti-riot truck managed to disperse students armed with sticks, helmets and protective masks, and open up Las Americas to vehicular traffic and pedestrians.

The protest along Carrera Séptima began in Chapinero at Parque de Los Hippies before moving south toward Parque Nacional (National Park). The protest was accompanied by music ensembles and representatives of the civic groups. The march is expected to reach Plaza de Bolívar in the late afternoon. Esmad throughout the day maintained a presence outside the Suba TransMilenio terminal and along Las Américas. Other confrontations between the district’s Coexistence teams and encapuchados (masked vandals) were reported on Avenida El Dorado near the city’s science center Maloka and Police Headquarters.

Some 100 protestors held a sit-down (plantón) at the intersection of Calle 80 with Autopista Norte, near the monument of Los Héroes.  According to the district, 37 buses have been vandalized since the start of mobilizations at daybreak. In the working-class neighborhood of Mandalay, Esmad was in a standoff with demonstrators as residents tried to form a human barricade to protect their homes. The district’s Government Secretariat Luis Ernesto Gómez has mediated in several road blockades to avoid the use of force by authorities. Shopkeepers began shuttering up their businesses early on Tuesday as vandals attacked police with petrol bombs in the streets of the Arts District San Felipe near Avenida Chile.

By 5:00 pm, 84 protestors had been detained and sent to Protection Centers, four civilians injured – among them a minor – and five members of the National Police. Of the hordes of vandals, only three face criminal charges confirmed Mayor López.

The Mayor claims that there was no need to consider the possibility of enacting curfew even if the security situation in the capital worsened; as was the case on November 21, 2019, when former Mayor Enrique Peñalosa took extreme measures to end wide-spread rioting across Bogotá with the start of the Paro Nacional.