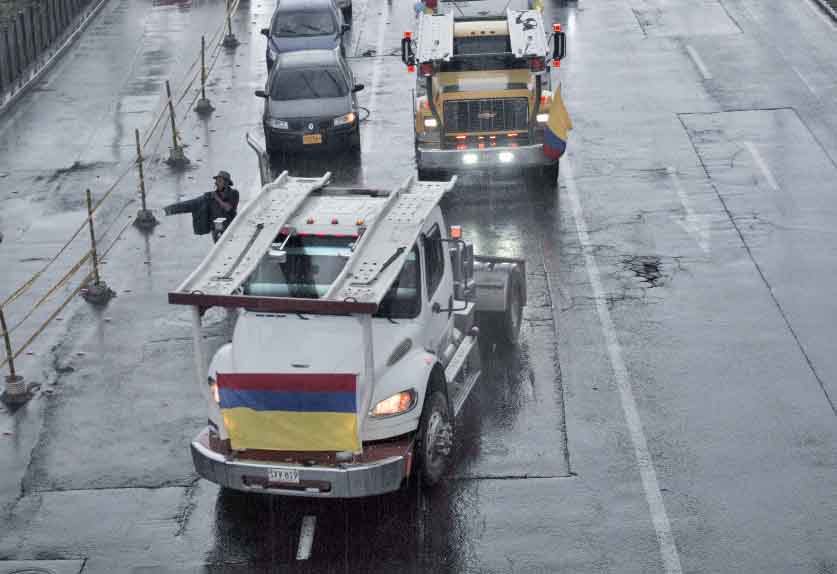 Peaceful demonstrations were held over the weekend in many Colombian cities, among them Bogotá, the nation’s capital, where cultural organizations joined civic movements as part of the ongoing national strike Paro Nacional. While the protests drew some 3,000 participants according to the district’s Mobility Secretariat, the majority of Bogotanos continued their activities in an atmosphere of anxiety given that supplies of perishable goods are running low in discount stores, supermarkets and the capital’s central food depot Corabastos.

On Saturday, a police operation on the Bogotá – Zipaquira highway, which connects the dairy producing communities of the departments of Cundinamarca and Boyacá with the capital, was reopened after barricades placed strike supporters were removed with the support of the Army. One of the instigators who rallied locals to maintain the blockade is the Mayor of Zipaquira Wilson García. Zipaquira is a popular day destination for tourists visiting Bogotá given its world famous salt mines and Salt Cathedral.

During the weekend, truck drivers frustrated by prolonged blockades along several highways that connect agricultural regions with large cities organized themselves to bust through barricades erected with bamboo and old tires. Given the reality that the nation’s food security is under threat by a strike that entered its twelfth day Monday, President Iván Duque called on governors and mayors to immediately lift all blockades that are “affecting and violating the rights of citizens.” The blockades are also impeding the transit of coronavirus vaccines and oxygen for healthcare workers. “There is no justification to block any road, never has been, because ours is a government that seeks to have spaces for dialogue,” remarked Duque.

Despite the actions of truckers-turned-humanitarian heroes, on Monday, protestors managed to block the entrance to Bogotá on Calle 80, resulting in the deployment of the police’s mobile anti-riot squadron ESMAD. Even Bogotá Mayor Claudia López,  who has staunchly defended the right of peaceful protest admitted on Twitter that “some youngsters are affecting mobility and ability of humble fathers and mothers to get to work. Public transport belongs to citizens and food is an essential public service.” According to López, in a city lurched in mobility gridlock, and ICU occupation at 95%, the food supply chain in Corabastos is “normalizing” after 993 trucks entered the capital during the weekend.

As isolated protests continue Monday in various locations of the capital, Bogotá’s Government Secretariat Luis Ernesto Gómez confirmed on his Twitter account that he had to be admitted to hospital after suffering from coronavirus symptoms that affected his breathing. Gómez has actively accompanied anti-government marches in the capital to guarantee the right to peaceful protest and deter acts of violence, as he did on Friday in the historic Plaza de Bolívar while a horde of vandals attempted to storm the grounds of Congress.

At the epicenter of the violence that erupted with the Paro Nacional, the security situation in Colombia’s third-largest city, Cali, remains precarious with road blockades, dwindling food supplies and gasoline shortages. Given the desperate conditions in the departmental capital of Valle del Cauca, President Duque has boosted the military presence in the city and ordered strike organizers, among them leaders of the Nasa indigenous guard, to lift all blockades that are chokeholding the free movement of citizens and essential items.

President Duque headed to the besieged city Sunday night to oversee a council meeting with Mayor Jorge Iván Ospina, police and military authorities. In an affluent suburb to the south of the capital, and which became known during the early 1990s as the heavily-guarded enclave for the white-collar bosses of the Cali Cartel, brothers Miguel and Gilberto Rodríguez, exasperated residents blocked entry of the indigenous Minga in retaliation for their blockade of the Cali-Jamundí road. Videos circulating on social media show armed vigilantes roaming the streets of Ciudad Jardín, others shooting pistols in the direction of the indigenous guard, while other viral posts also depict a mob of the indigenous Minga storming and vandalizing a residential compound after smashing their truck through the front metal gates.

Condemnation of human rights abuses and police brutality by the United Nations, European Parliament, as well as multiple news organizations, including The New York Times, have received sharp rebuke from the Colombian government through official statements and editorials in which respected journalists claim the country’s security forces are being systematically targeted for “genocide,” and other falsehoods. In an article for the country’s leading newspaper El Tiempo, María Isabel Rueda joins a chorus of voices that are questioning why Colombia now is being paraded on the world stage as “a repressive regime, from the court of Nicaragua, Venezuela or Syria.” Rueda signals opposition leader Gustavo Petro for stirring much of the fake news hysteria in “flamboyantly christened public statements,” where police “walk the streets looking for someone to kill, harm their eyes, torture, rape and disappear. And that is not the truth.”

The lack of a contingency plan by the national government to mitigate the international outrage forced Foreign Minister Claudia Blum to hand in her resignation, and while there is a narrow disparity in the number of victims of the protests with human rights organizations putting the number at 41, while the Attorney General’s Office and State Ombudsman put the number at 27, in Bogotá, not one civilian has been killed by security forces nor are there “disappeared” persons confirmed Mayor López. Among the most outspoken critics of the way the crisis in Colombia is being presented around the world is Luis Guillermo Plata, Ambassador to Spain. “I cannot speak of police abuse when I have 785 injured police officers, who have a job to fulfill, and who are also attacked.”