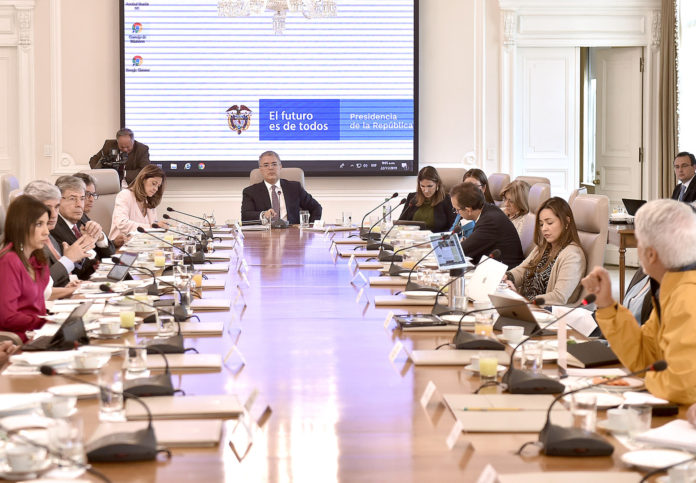 In the wake of the widespread protests and acts of violence committed Thursday in the Colombian capital during the national strike, the damage to Bogotá’s mass transportation system TransMilenio is estimated to cost the city COP$20,000 million pesos (US$6 million) with repairs to gates, windows, ticket booths, and platforms. The station Ciudad Universitaria was destroyed in its entirety by hooded vandals who rioted late into the night. Even though authorities stated that the violence was focalized in three areas of the city (Historic Center, Suba and National University), commuters faced long delays early Friday morning as the transit system attempted to resume operations with 50 buses taken out of service, all impacted by vandals.

Given the unprecedented events taking hold of Colombia’s largest city, President Iván Duque addressed the nation at 10 pm, in which he stated that “Crime and violence only generate pain and poverty, and Colombia rejects it.” The democratically elected leader also stressed that the Paro Nacional shows “that this nation can exercise its individual liberties without infringing on the liberties of others.” Duque also warned that the government will not permit looting and attacks against private property. “We are going to apply the full force of the law,” he said. “From the first day of my administration, I have been direct: Crime and violence have no space in our society.”  The President attempted to appease opponents who marched peacefully in every city of the country, saying: “Colombians have spoken, and we are listening.”

With ongoing flashes of violence in several localities of Bogotá Friday, including the looting of a supermarket in Patio Bonito, and theft of a SITP bus in which criminals destroyed windows and caused serious injury to the driver, TransMilenio was forced to enact preventive measures to protect its articulated bus fleet, announcing the closure of its northern terminus Portal Del Norte.

Mayor Enrique Peñalosa announced that the sale and consumption of alcohol is banned as of noon Friday to same time Saturday, yet could be extended if the security situation worsens.

After a boisterous manifestation, Thursday evening with a cacerolazo, which rattled Bogotá to the sound of pots and pans banged from balconies and in the street, another cacerolazo has been summoned by protesters in the Plaza de Bolívar, starting 3:00 pm. As sanitation crews begin the arduous process of cleaning Bogotá’s streets of the debris caused by the violent protests, Mayor Enrique Peñalosa has shied away from decreeing Toque de Queda –  curfew –  for the entire city, and most extreme legislative measure to guarantee security for the capital’s 9 million inhabitants. The Presidency is expected to release a statement Friday afternoon.