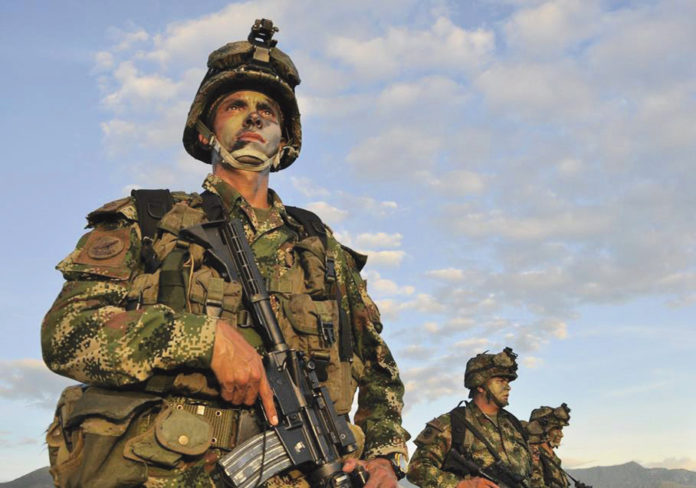 Colombia’s Armed Forces began a military campaign early January to reclaim the southern departments of Cauca and Nariño from control of illegal armed groups and drug traffickers. Launched by President Juan Manuel Santos, the Fuerza de Tarea Hércules (Hercules Task Force) is a 9,800-strong division made up of Air Force, Infantry and Navy. “These heroes are going to help restore tranquility to almost half a million inhabitants of 10 municipalities,” said Santos during the start of the campaign.

Created to respond to attacks against civilians by the Ejercito de Liberación Nacional (ELN) guerrilla, Hercules covers topographically diverse terrain, some 16,000 square kilometers of Pacific rainforest and high Andes. The military deployment is the largest since peace talks began with the Revolutionary Armed Forces of Colombia (FARC) in 2012, and ended with the signing of revised final accord four years later.

The impoverished port city of Tumaco has witnessed the arrival of 2,000 army and navy personnel from Hercu-es to help with drug interdiction and in a coordinated effort with the anti-narcotics division of the National Police. Besieged by organized crime from the so-called Clan del Golfo, this majority Afro-Colombian city has become a strategic staging point for the shipment of cocaine to the United States and Mexico. The ‘Gulf Clan’, as it is called in English, emerged as a crime syndicate after the paramilitary United Self-Defense Forces of Colombia (AUC) demobilized in 2006. Tumaco has one of the highest homicide rates in the country, 75 murders per 100,000 inhabitants, when the national average is 23.

The peace forged with FARC erupted in a territorial war for large swathes of Nariño and Cauca between the most violent cartel in the country and the last Marxist insurgency. The objective: maintain the lucrative drug routes open that extend from the Putumayo and Guaviare departments to Valle del Cauca and Nariño on the Pacific. The area surrounding Tumaco has developed into one of the most lucrative coca-growing regions, with some 23,000 hectares planted or 16% of Colombia’s total illegal harvest.

The security situation in Tumaco – and backwaters of Nariño – deteriorated last year to such a degree, that the municipality of 200,000 inhabitants became embroiled in a coca revolt on October 5, after seven coca farmers were killed during a protest over forced crop eradication. The killings were initially attributed by the authorities to FARC dissidents. But, when Santos ordered an investigation based on the accusations of locals against the police, by the end of December, the Attorney General’s Office formally charged one police officer and a soldier for the massacre.

Last month, another round of violence from ELN forced the government to indefinitely suspend peace talks. When the group accepted responsibility for the bombing of a police station in Barranquilla which killed five agents and injured dozens, the prospect of negotiating peace appeared futile. The “indefinite” suspension occurs just two weeks after the fifth-round of talks in Quito were about to begin, and also were suspended when this guerrilla, founded by rouge Catholic priests, broke a bilateral ceasefire.

The attack on January 10 by a front of the 4,000-member ELN against the country’s main oil and gas pipeline was followed by a sniper ambush against an army garrison in Arauca in which one soldier was shot and killed. Santos recalled the government’s chief peace negotiator with ELN, Gustavo Bell to Bogotá, but despite a “crisis,” it appeared reason would prevail.

The collapse of the 101-day cease-fire led to an escalation of the conflict. Then, the cowardly bombing in Barranquilla.

Foreign governments have called on the ELN to show restraint. Shortly after the first visit to Colombia by the United Nation Secretary General, Antonio Guterres, the guerrilla, did express “readiness” and “willingness to seek solutions to the impasse created by the government.”

But, while Santos insists the ELN show real gestures of peace rather than “just talk,” the turf war is extending to other departments, especially Antioquia, where, on January 21, a small restaurant owner and six of his companions were gunned down while having dinner in his establishment near Yarumal.

The Yarumal massacre is sadly one of many recent attacks that have Colombia’s security forces on high alert. “Our entire river fleet and navy bases are committed to Hercules,” remarked the Commander of the Colombian Navy, Admiral Ernesto Durán to The City Paper.

There may be no more rounds of talks between ELN and the Colombian government as general elections loom on the horizon. With public opinion still grappling with FARC’s former senior commander “Timochenko” launching his presidential campaign to jeers of “assassin,” ELN’s post conflict participation in politics is at least one administration away. The ELN debacle has also consolidated the opinion of right-wing parties and their candidates that it is futile to seek another peace for this country if the one in process faces legal obstacles.

For Jean Arnault, head of the UN mission in Colombia, “this search must be accompanied by tangible benefits for the population, particularly communities most affected by the conflict.” Brazil, Chile, Cuba, Ecuador, Norway and Venezuela are the guarnator nations to the talks.

While international organizations are committed to accompanying the process, a report last month by Human Rights Watch also condemned ELN for attacks against civilians and their continued use of kidnapping for economic and political motives. “”In 2017, the ELN continued to commit serious abuses, such as executions, forced displacements and recruitment of minors in the department of Chocí. On October 25, the ELN murdered an indigenous leader in Chocó, despite having committed to the government to stop these abuses.”

Hercules may herald the first of many coordinated military operations in Colombia and necessary deterrent to criminal groups. As 9,800 troops now advance across Cauca and Nariño, the prospect of peace with the country’s last guerrilla group remains elusive