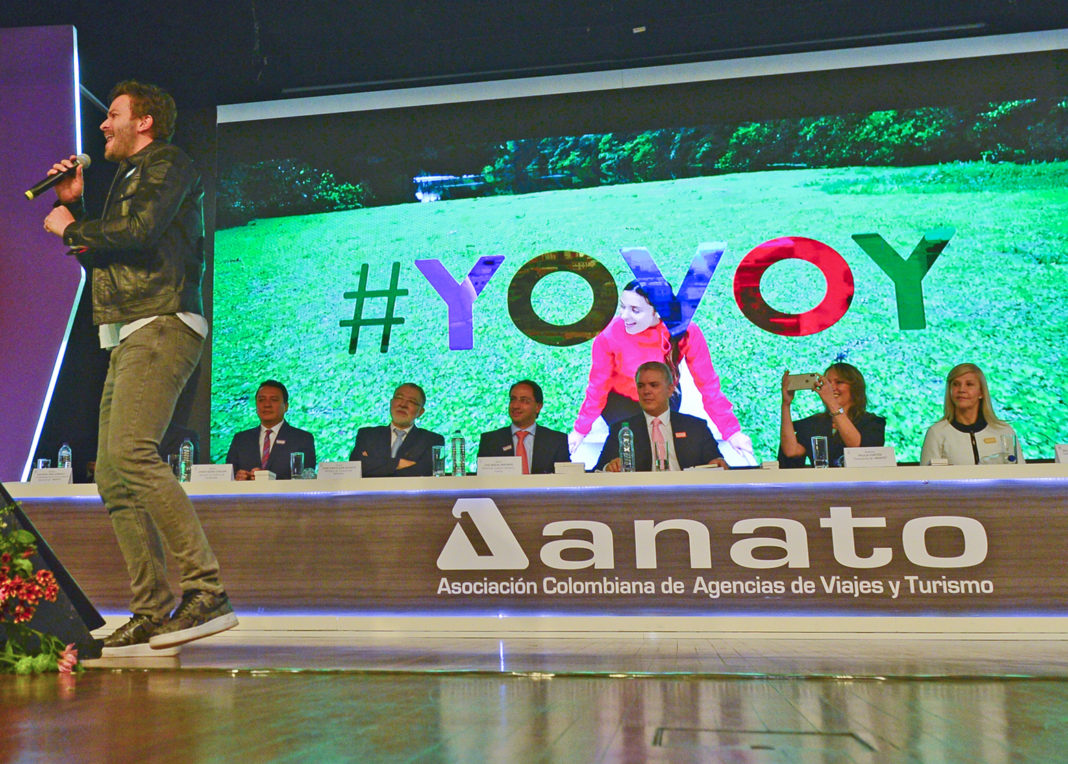 Colombia’s largest travel and tourism trade show opened Wednesday at the Corferias exhibitions grounds in Bogotá with some 5,000 industry professionals from Colombia and around the world. Organized by the Association of Colombian Travel Agencies and Operators (ANATO), this three day fair showcases the country’s 32 departments, as well as airlines, hotels and cruise operators represented in the country.

For this 38th edition, Valle del Cauca is the invited department and El Salvador – Guatemala guest nations. In his inaugural speech President Iván Duque mentioned the significant increase in foreign visitors last year to the country, some 4,3 million according to the Ministry of Commerce, Industry and Tourism (MinCIT), besides the additional 500,000 who arrive onboard cruise ships.

President Duque also reaffirmed a campaign commitment that “should I become elected President of Colombia, I will become the President of Tourism,”  declaring also, that the sector represents the “new oil” within the framework of the country’s economic reactivation.

“A country that suffocates its business leaders […] cannot expect to have sustainable growth above 4%,” remarked Duque, adding that among the government’s many priorities for 2019 is the elimination of the tourism surcharge, maintain tax benefits for the hotel sector and extend them to theme parks, convention centers and marinas, as well as extend the Sales Tax exemption to more destinations that promote ethno-tourism and community-led conservation initiatives. Currently the Pacific beach community of Nuquí, in the department of Chocó, is exempt from Sales Tax, and a measure that was introduced to help businesses stay afloat.

President Duque also emphasized the importance of differentiating Colombia’s tourism portfolio given its many festivals, carnivals, and diverse arts and crafts heritage.

As part of the Financing Law approved in Congress, President Duque reiterated that a zero income tax is applicable during 7 years for entrepreneurs who generate a minimum number of jobs and invest up to $3,000 million pesos (US$1 million) in a business.

The launch of ANATO also coincided with the official presentation of the government’s latest campaign #YOVOY (I Am Going) to promote national destinations for the domestic traveler. With a video that captures Colombia’s stunning natural landmarks and historic sites, the song that accompanies #YOVOY was composed by singer-songwriter Gusi and performed during the inauguration.

Among many activities being promoted for visitors to Colombia in 2019 is birdwatching in the Valle del Cauca, dolphin spotting in the Guaviare, religious tourism in Nariño, exploring Putumayo’s natural wonders, hiking trails that connect patrimonial towns, and having a whale of a good time along the Pacific coast when the humpbacks arrive with their offspring from May to October.