Home News After grim week for COVID-19 deaths in Colombia, almost half of all...
Twitter
WhatsApp
Linkedin
Facebook 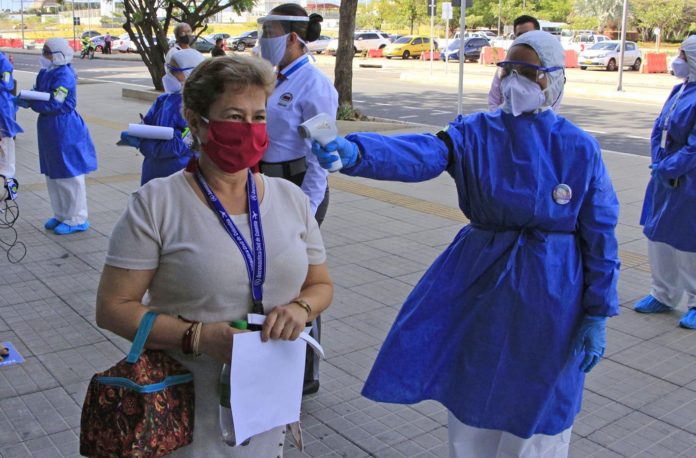 Thursday and Friday marked the highest numbers in Colombia relating to coronavirus after almost five months since the outbreak on March 6. With 315 deaths registered on Thursday and 287 on Friday, the toll now stands at 7,975. Despite grim statistics with the mortality rate, including 111 fatalities from the virus reported on Thursday in Bogotá, infections lowered nationwide on Friday with 7,168 compared to 7,945 the previous day. And while the Colombian capital broke a daily record in new infections on Thursday with 3,750 on Friday, the cases reduced to 3,287.

According to district health authorities, Bogotá has entered a six-week long phase of reaching the COVID-19 peak, and while its remains unclear how steep of flat this peak will be, while new infections are expected to continue rising, so too, are recovered patients, with 113,864 since the outbreak, putting active cases at 111,228. The recovery rate in Colombia is 44% – and while patients can recover within days or weeks at home – many others require hospitalization or intensive care. And when it comes to testing, the country is also ratcheting up its daily capacity close to 30,000.

After weeks in which Barranquilla and department of Atlántico were seeing daily cases above 1,000 on Friday the largest city on the coast registered 203 cases and 207 in the department. Also encouraging is Cartagena with 114 new cases and Leticia, departmental capital of Amazonas with 9. Both Cartagena and Leticia were epicenters of the virus in May.

While mayors and governors across the nation have enacted different measures to protect their populations during the alleged “peak” of the virus, including Bogotá where half of the city’s nine million residents will remain in rotating lockdowns until mid-August, on Friday, Mayor Claudia López broke away from the coronavirus agenda to announce that the planned new line for the mass transit system TransMilenio along the Carrera Séptima has been revoked to make way for an environmental corridor. The announcement of a major change to the urban transportation grid was welcome news after months in which the district’s policy agenda has been focused almost exclusively on coronavirus.

The week in Colombia also saw the first commercial domestic flight with strict biosecurity protocols for crew and passengers between the cities of Bucaramanga and Cucuta. The 45-minute flight with the low-cost carrier Easy Fly aims to open up air travel among destinations with low cases of COVID-19. Bogotá’s El Dorado airport remains closed to all domestic and international flight – except cargo and humanitarian flights – until September 1.