Mexico is in the midst of a human rights crisis. President Enrique Peña Nieto’s government, however, is focusing almost exclusively on its economic and political agenda and leaving human rights aside.

Reports of torture and ill-treatment have increased by 600 percent in the last decade, and enforced disappearances continue to occur widely. In August 2014, the government acknowledged that there are around 22,000 missing persons.

On September 26, a group of students from the Raúl Isidro Burgos Rural Teachers’ College of Ayotzinapa went missing in the city of Iguala after police opened fire on them without warning. Six students were killed in the confrontation, and another 43 were taken into custody and never seen again.

In the search for the missing 43 students, unrelated mass graves have been discovered in the state of Guerrero, and the government’s complicity with organized crime has been in the spotlight.

Outraged by these human rights violations and the country’s 98 percent impunity rate, and mobilized by the mass kidnapping in Iguala, people from diverse groups in all regions of Mexico are raising their voices in protest.

People are demanding justice for the victims and their families, chanting “You took them alive. We want them back alive.” The protests have been mainly pacific, creating an environment of indignation and union against impunity.

The Mexican government has responded to the protests with more human rights violations, trying to inhibit the social protest by threatening to use force.

In November, Mexican authorities placed 11 people in maximum-security prisons for participating in a demonstration. Those 11 protesters were released without charges, but the investigation into whether they were mistreated by police officers (as witnesses have claimed) is still pending.

The message of the government is quite clear: Social protest is not welcome.

States like Puebla, Mexico City, Quintana Roo, and Chiapas have enacted laws that interfere with the right to protest. A new law allowing police to use firearms to break up demonstrations in Puebla resulted in the death of a 13-year-old boy during a protest in July.

Protest is a way of taking action. The big challenge we have is finding a way to transform all of this solidarity and discontent into actions that can make a real difference. 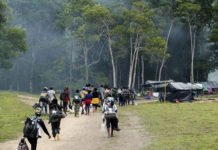