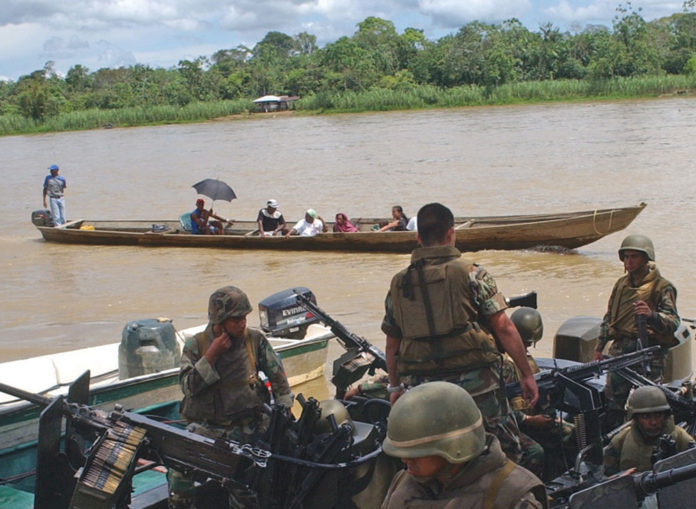 A high court in Colombia has ruled that the Atrato River is deserving of rights as guaranteed by the Constitution. This landmark decision sets an important precedent for preserving one of this country’s most biodiverse and endangered ecosystems. Even though the decision was passed last November by magistrates of the Constitutional Court, only in May was the announcement officially released, given the urgency to stop gold mining operations in tributaries and mudbanks of this country’s third most navigable waterway.

The petition to offer the Atrato “protection, conservation, maintenance and […] restoration” was presented in 2015 by Tierra Digna – an NGO and social justice research group that works closely with indigenous and Afro Colombian communities in the Chocó department, through which the Atrato flows on a 600-kilometer journey from the southwest Andes to the Caribbean.

Traversing a vast expanse of tropical rainforest, the Atrato’s surface area including estuaries and wetlands, represents 50% of the department, and a river with one of the highest water yields in the world. The Atrato is the largest river in the country, followed by Magdalena and Cauca. It is also a river with an identity indelibly linked to the cultural expression of the Chocoanos.

While the well being of the river is central to the ruling, so too the plight of communities that depend on this vast waterway for transportation, reaching markets, schools, and many of which have borne some of the worst violence associated with this country’s 52-year long conflict.

The court order demands that the government “construct a mining and energy policy in accordance with social and environmental needs” and “strengthens its institutional presence to confront effectively all illegal mining” in the Atrato. The destruction of the region’s lush wetlands has contributed to an environmental disaster that is depriving locals of essential rights: access to clean water and dignified living conditions. According to the court, “nature is a true subject of rights that must be recognized by states and exercised […] for the communities that inhabit it or have a special relationship with it.”

To reach this conclusion, lawmakers weighed in on the importance of other waterways in the history of mankind, beginning with the Tigris and Euphrates Rivers in Mesopotamia; the Nile in Egypt; India’s Ganges, and China’s Huang He. For the high court, however, the Atrato has remained a “no man’s land” for too long.

The special relationship that should exist between riverine communities and the Atrato was impacted by the internal conflict and scramble to extract gold from the earth. While atrocities committed by FARC in the Chocó – most infamously a massacre in May 2002 when 79 civilians were killed after a cylinder bomb exploded inside the church of Bojayá – have been part of the high profile negotiations in Havana to recognize the victims of the conflict, as recently as 2015, the towns of Vigía del Fuerte, Ríosucio and Beté, in the middle Atrato, were still being threatened by armed groups.

As a liquid highway used to transport combatants, weapons and hostages, the Atrato cuts through one of the most dense rainforests in the world. Its thick tree canopy also provides a natural cover for drug smugglers. To navigate the rivers that flow into the Atrato, requires negotiating shifting enemy lines.

In this natural wonder there are immense reserves of gold, silver and platinum, yet the Chocó is one of Colombia’s most impoverished departments, lacking in essential public services and infrastructure. As a predominantly Afro Colombian population that can trace its heritage back 500 years when the region was colonized by slaves, economic abandonment has caused several humanitarian emergencies and departmental-wide paralysis. With the court’s landmark decision, the Atrato may have a new lease on life, must be protected. But in order for this to occur, there has to be accountability.

To guarantee that the ruling has binding powers, the government and affected communities of the Chocó must appoint two delegates over the next three months to create the “Guardians of the Atrato” commission. This entity will work closely with environmental organizations such as the Humboldt Institute and WWF Colombia. A panel of experts are responsible for verifying compliance with the ruling, as the Ministry of the Environment has been ordered to implement a plan to decontaminate the Chocó’s main water sources from heavy metals and chemicals used in the gold extraction process.

Open pit mining has caused vast areas of the Atrato’s rainforest to be felled, and indiscriminate logging by timber mafias has torn away at another incalculable resource: the capacity for this dense rainforest to off-set man-made carbon emissions. As a nation vulnerable to the effects of extreme weather, recent heavy rainfall across Colombia during the last several months has resulted in the dangerous rising of water levels in all major rivers, including the Atrato. For the court, the protection of this natural body directly protects the inhabitants in a vast wetland, from flooding.

“It’s a symbolic ruling, not only for the environment, but also because it’s the first time that a Constitutional Court welcomes a new framework of rights, called biocultural rights,” claims Ximena González, a lawyer for Tierra Digna. “The direct and narrow relationship between biodiversity and culture has now been identified, and one indispensable and essential for all ethnic communities, especially in Chocó.”