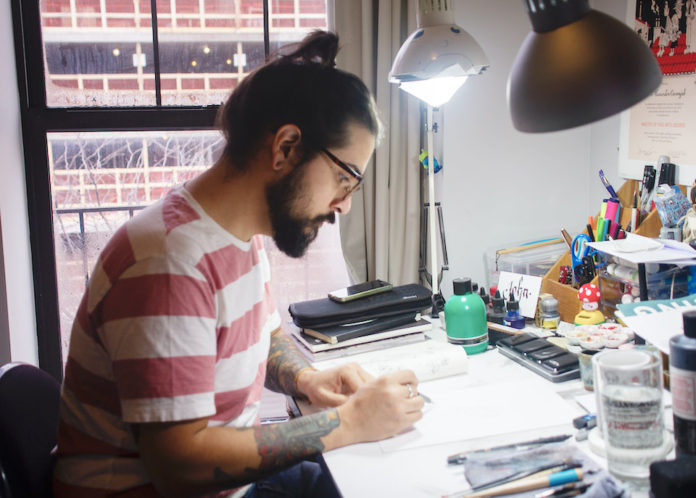 John Carvajal has spent most of his adult life with cartoon figures. At his Brooklyn apartment, he keeps a solar-powered Stitch toy on the dining table, manga figures besides his desk and stuffed animals on his bed. He lives with them and draws them.

“When I was young, I never really had too many friends, so I would watch a lot of cartoons and drew the characters I liked,” Carvajal says. Born into a Colombian immigrant family with both parents from Bogotá, he said art wasn’t encouraged in the household, and he never thought it as a means to make a living. Now, at 33, he’s a cartoonist and freelance illustrator, doing things he thought were impossible. His family settled in Miami, then later moved to Clearwater in Florida, a small, conservative town with few Latinos, where he once saw a Confederate flag hanging a few doors down the street.

Carvajal graduated from the renowned Center for Cartoon Studies with an MFA three years ago, and before that, he spent four years at Ringling College of Art and Design, a private college. He takes freelance illustration jobs for non-profit organizations like Casting for Recovery, a U.S. outdoor retreats program for women with breast cancer, and websites The Nib and The Eater. He is now working on an autobiographical comic series about growing up as a child of immigrants in the U.S.

On a recent Friday morning, he starts doodling characters and scenes in a notebook, “messing around” with ideas at 7.30 a.m. at the desk next to his bed. Sometimes, noise from the construction site outside his window starts even earlier, drowning out the instrumental and progressive music of Mogwai from his speakers, but he doesn’t seem bothered.

With his long, black hair neatly tied into a knot, he perches on a high chair, concentrating on the notebook. Overhead, two lamps – he’s drawn cartoon faces on the shades – provide strong white light. “It’s hard to tell really what’s happening but I can see it,” Carvajal says. He wants to draw a woman with a sword in one hand, a mask in the other, and a mysterious creature behind her. For almost an hour, he experiments what they would look like. Mechanical pencils, ink pens and water color brushes are waiting in line for him near his right elbow.

Carvajal likes drawing otherworldly elements and characters whose identities stand out. He has been heavily influenced, he says, by the Japanese film studio Ghibli, which often uses female leads in such celebrated animated films such as “Spirited Away” and “My Neighbor Totoro.”

“The idea that having a non-white male as the lead isn’t going to sell any- thing is false,” he says. “You can have any character be a leading character. If the story is good, it’s good.”

Over the years, he has started drawing more Latino and LGBT+ characters in his comics: A Latino dad with mental illness who thinks the dust in his house won’t go away; a Latino transwoman who goes on an imagined adventure after being socially rejected by her neighbors. His characters may not be as famous as Ghibli’s world-renowned Chihiro and Satsuke, but they mean the world to him.

Characters in his comics also speak Spanish from time to time because it feels natural to him. “There’s this idea that because we are here in America, we have to always write stories in English,” he says. “I don’t think that’s true.” He knows that not every conversation, especially within the immigrant community, happens in English.

He says that he writes for people like him who grew up between two cultures, and hopes that his decision on inserting colloquial Spanish will encourage more conversations within the Colombian community. If his target readers don’t understand a lot of Spanish, he says, they can always ask their parents, relatives, and friends.

In an ideal world, he wants Latinos to be more open to talking about mental illness. A lot of people have told Carvajal they found his dust story really sad and depressing, but he is not discouraged, he says, it’s good that people react, even if they’re uncomfortable.

He knows how conversations can help. In high school, while going through a rough period, he was self-aware enough to ask to see a therapist and was diagnosed with anxiety and depression. But his father quickly took him out of counseling. “A lot of times it’s like, ‘oh, nothing’s wrong with you, you don’t need to see a therapist’,” he recalls. He has never brought it up again with his dad.

At his desk, he places a piece of paper next to his notebook and swiftly outlines more details with a mechanical pencil: The girl’s mask is an animal’s half skull. She’s walking alone, with more skulls scattered by her feet, fearlessly embracing the darkness. Behind her, a red eel opens its jaws with razor-like teeth.

Later, he posts it on Instagram with three of his common hashtags #illustration, #watercolor, #johncarvajal and a caption as modest as himself – “Here’s a thing.”

He says he doesn’t want to be famous, but “hopefully have someone tell me that some story I wrote resonated with them,” he says. “That would be a pretty successful day.” 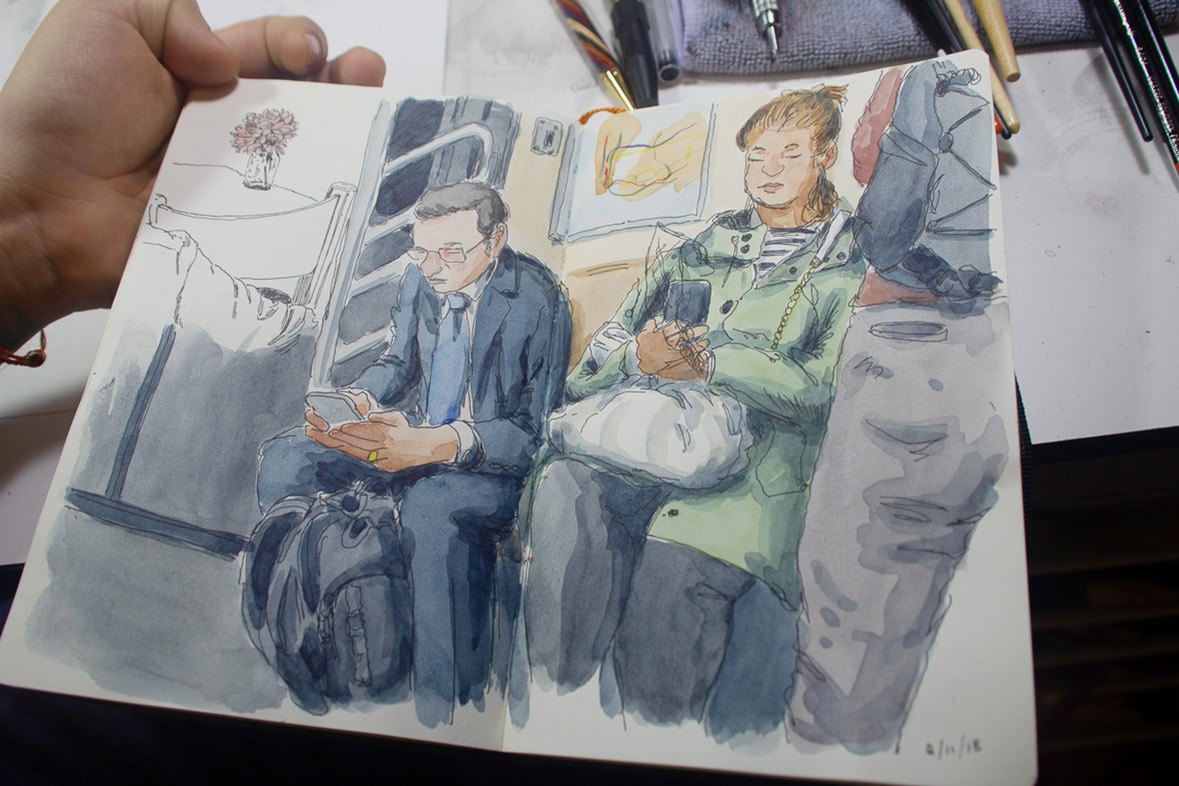