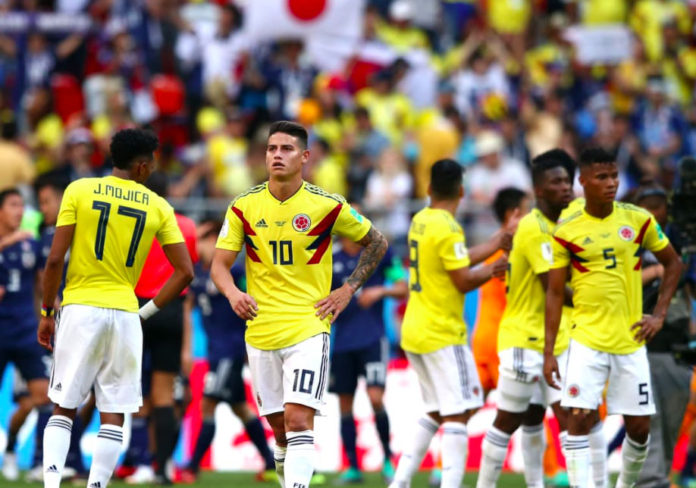 Just three minutes into the game, midfielder Carlos Sánchez was handed a red card after he obstructed with his arm, a goal-bound shot from Shinji Kagawa. After Sánchez was expelled by the referee, La Selección was forced to endure the wrath of Japan with a 10-player team. Colombia managed to equalize in minute 39 after midfielder Juan Quintero was given a free kick in which the ball narrowly entered the goalpost of Eiji Kawashima.

Despite hopes that with one team member less than Japan, Colombia would turn the tide by scoring in the second half, in minute 73 forward Yuga Osako of FC Köln broke through Colombia’s defense with a header that stunned the nation. Argentine coach José Pekerman, tried to give the team an equalizer by pulling James Rodríguez from the bench, but the winner of the 2014 Balon D’Or (Golden Boot) never managed to show his tricolors by scoring, instead spent the remainder of the match fending-off the advance of Japan with team captain Radamel Falcao.

Cheers from the yellow, red and blue fans that filled the Mordovia Arena in Saransk were soon reduced to tears, when, despite 5-minutes of extra time, Colombia failed to neutralize. As a Group H favorite, Colombia must now face teams Poland and Senegal in order to have a chance at reaching the last 16. However, Poland, ranked 8 by FIFA and considered Colombia’s strongest rival, lost against Senegal in another World Cup upset. The Tigers of Teranga, ranked 27, beat their Eastern European rivals 2 – 1 in their first World Cup match on Tuesday since 2002.

With Group H in disarray after Colombia’s heart-wrenching loss to the Blue Samurai, and the Tigers taking a bite out of Poland’s ambition to be group leaders, La Selección must now secure a win against Poland in Kazan, on Sunday June 24, in order to have any chance of staying in Russia. The game changer for both Poland and Colombia will take place that same Sunday when Senegal faces Japan in Ekaterinburg.

After our debilitating loss Tuesday to Japan, coach Pekermán told reporters that with only 10 players, the game had been “draining.” Even though our World Cup moment may appear to be short-lived, a window of hope still exists for Colombia to show its true talent in Russia.