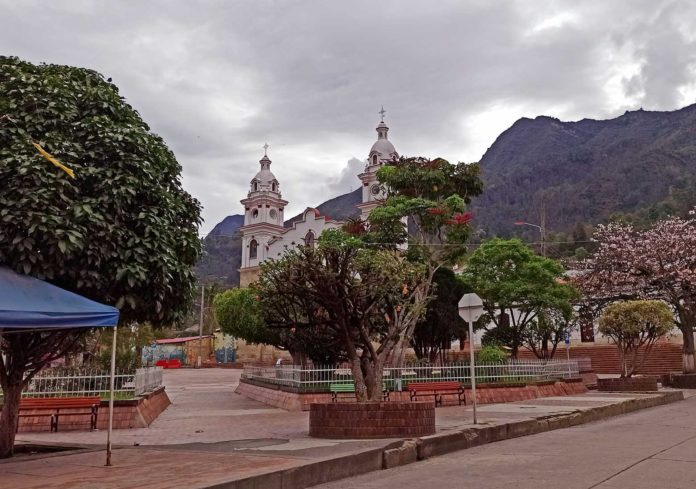 I report from Choachí – its name derived from the “Balcony of the Moon” of the Muiscas who lived here before the Conquest. It lies at the bottom of a bowl of spectacular Andean mountains an hour by road from Bogotá. The population of Choachí is around 10,000. Its climate is tropical but temperate and capricious. In early and mid-March, it often rose to 30 centigrade in the middle of the day. For the past ten days, however, it has moderated, dipping at times to the freezing low-teens, the upside being that it has ended a long dry season (which started in January). The formerly scorched grass is greening, the tops of the tall bamboos which screen our half-acre plot from the road to Bogotá are no longer jaundiced.

Considering it’s spitting distance from a metropolis of many millions and the strong dependence of its economy on commuters, tourists (attracted by its thermal baths) and what might be called the remittances sent from Bogotá to people who have retired here or are supported by their relatives there, Choachí is still relatively rural, in that it is surrounded by fields and forests, close-knit, friendly and peaceful (barring the weekend rumbas, which drive us, a mere kilometer away, crazy).

Not that it is unsophisticated: it has good internet cafes, gyms, discos and academies of English, tennis and martial arts. The downside of that, in turn, is that, despite being the center of a region that still grows a lot of food, its supplies of that (and toilet paper of course) mainly depend on stuff trucked in from the capital. Fortunately, the restrictions on “civilian” traffic to and from Bogotá don’t apply to those trucks, which, day and night, continue to rumble just below our farmhouse. You can still buy bog paper, likewise face masks, plastic gloves and other basic preventive necessities. Likewise, the closure of all but essential businesses exempts the courier company which enables us and others to send or receive money and parcels.

Even so, the mentality of Choachí is still sufficiently rural for it to follow the general rule of Colombian society, which is that (with the obvious exception of the slums), the further you get from a big city, the less likely people are to obey the law. Miraculously, however, the chiguanos (as they are called) are behaving like good scouts. Except for supply vehicles (sporadically fumigated on the highway), the town is closed off to traffic. The few pedestrians you see on the streets dutifully wear their face masks and restrict their errands to the essentials. For the rest, it has almost literally gone to the dogs (on the pavements) and birds (in the brightly flowered trees). The supermarkets, greengrocers and restaurants (take-away or home delivery only) are strict about the face mask/one customer at a time ordinances. The big bakery on the main square serves you from a counter on its front and is constantly disinfecting the installations behind.

There’s a ghost town feeling to it all, weird, compared to its normal liveliness, and more still, because of the suspension of church services in a still staunchly Catholic place and, above all, the utter absence of children. I feel sorry for them, stuck in their houses, as they are, but, here, as in the rest of the world, they’ve got their cell phones and computers to amuse themselves with. Still, all is placid.

Compared to most, in Colombia and abroad, my wife and I are privileged because we enjoy fresh air, lots of space and particularly in my case, the opportunity to hack at the weeds with a machete whenever I feel restless before the computer screen. Even in our rented apartment in Bogotá, where we hitherto spent half of the week, I would stretch my legs every and now and again and go for a walk to the stores, bank or park. Being enclosed within four walls would drive me nutty. Nor do we want company, since our caretaker is resident and two of his grandchildren are currently staying here. Luckily we are too, having arrived here just a few days before the quarantine which would have trapped us in Bogotá.

Meanwhile, our son is tending the fort there (along with our daily, now temporary live-in, maid), mainly because his virtual classes at the National University require him to stay close to his super-computer, drawing board and other professional tools. However, he is cool about it, I suppose an escape from nagging parents helps.

From what he and friends in Bogotá tell me by email, the city is also behaving well. He reports the same ghost town atmosphere in our neighborhood, La Macarena, with the closure of its exotic restaurants, bars and boutiques. It also has a colony of foreign students on their year abroad, who are probably more disoriented than usual, I imagine. Here (and this applies to other big cities), credit for the timely implementation of quarantines and other sanitary measures must go to an unusual alliance – a portent for Colombia at large, it is to be hoped – between the political right (President Duque) and left (in this case, Claudia López, the mayoress of Bogotá). What’s happening in the wilds, where subversives and gangs of one stripe and another, still rule, I don’t know, though there have been alarming reports of the paramilitaries taking advantage of the distracted armed forces and police to continue their campaign to exterminate civic leaders who are supposed to be implementing the post-peace agreement with the FARC guerrilla, which includes restoring the forcibly displaced to their lands, reparations and so forth (a remnant of FARC is plotting to do much the same from the safe harbor of Venezuela).

Like most in the world, this has been a time of reflection for me.  I speak as a member of the endangered (and elderly) species of hippies, of the back-to-the-land variety. However, as the classic Rubén Blades song puts it, La vida te da sorpresas, and by the time I bought this plot, about 20 years ago, I had moved to Bogotá, more or less entered the mainstream as a journalist and translator and realized that, neither by my background (the Bronx) nor temperament (bookish) was I suited to that back-to-the-land way of life and I simultaneously had doubts about the survivalist aspect of it (which struck me as selfish and blind to the need for a collective and political effort to save this world, which was sorry enough at the time).

Instead, my reasoning was that, given the collapse of the then Colombian economy at a time when narco-money was nevertheless driving the prices of apartments in Bogotá through the roof, it would be my only chance to buy a place of my own. Now that that apocalyptic view I’d long abandoned seems to be coming true, I should be satisfied that I was right all along, since, in terms of survival, we are much better off than the vast majority.

Somehow, however, it doesn’t feel like that, partly because I know that nobody will escape from the shit which is happening in the rest of the world, but mostly because it is all so unreal, as though I were simultaneously watching and acting in a Blade Runner-type futurist movie. By shit, I refer more to money than health. Two of my clients just bailed out on the translations they’d commissioned from me: the collapse of the vital centers of the world economy will ripple out to provinces like Choachí, I am sure, and the few greens and fruits we grow on our plot won’t save us from starvation. I nevertheless acknowledge the distorting effect of schadenfreude on a lifelong enemy of the system.

A week ago,  the first draft of this report stated:

“So far, no cases of the virus have been reported for Cundinamarca, the department where Choachí lies, but considering its short distance from Bogotá, it’s doubtful its immunity will last.” A day later, the virus was caught by an inhabitant of Choachí, though, as he was exposed to it in Bogotá, where he was undergoing weekly dialysis for a kidney condition, the news wasn’t so alarming. Nevertheless, I continue to take the usual precautions so I only go down to the town for a weekly injection (nothing to do with the virus, I assure you), when I accompany my wife, who does the shopping for the two of us.

Meanwhile, the authorities tightened their restrictions: even the businesses which are allowed to operate (supermarkets, groceries, pharmacies) must now close at 5 p.m. and humans are only allowed on the streets on alternative days, which follows the “pico y placa” control of cars in Bogotá, except it is determined by the last digit of your ID card, not your license plate. In that, at least, the police seem to be pretty relaxed, which is also true of the ban on old guys like myself, which in my case, is no problem anyway, because my face is covered by a mask and baseball cap.

Similarly, the fact that there are few cases for Colombia as a whole shouldn’t fool us into thinking it is blessed by its patron, the Sacred Heart of Jesus. As I see it, now that foreigners cannot enter either by air or by sea, the two paths the virus might take are from the two neighboring countries at the opposite poles with their Janus-faced pair of inept, blinkered tyrants: Venezuela, source, for the past few years,  of a massive (and unstoppable) influx of penniless immigrants, and Brazil, our border there (though porous, you only have to cross a street) sheltered to a point by the Amazon, but no comfort to my many friends in Leticia, one of whom just told me that the virus has reached some remote indigenous communities on the frontier.

Meanwhile, in case of need, I have three bottles of ayahuasca in my closet.