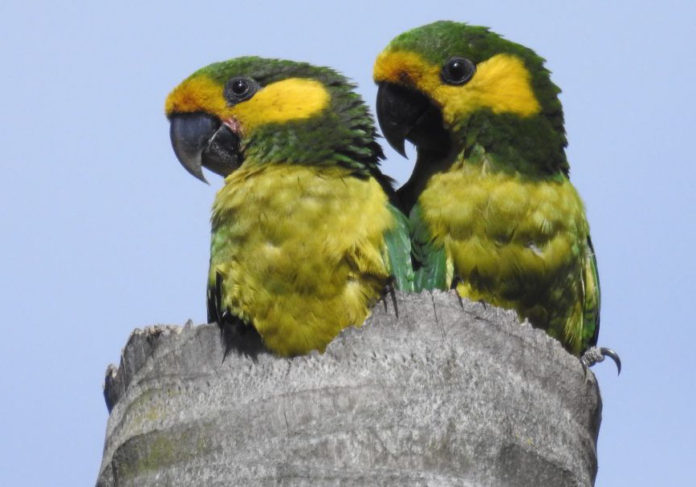 The murder of Gonzalo Cardona, near his hometown of Roncesvalles, Tolima, on January 8, 2021, marked another tragic episode in Colombia’s human rights record and this country’s efforts to protect environmentalists.

Cardona, who for more than two decades had scaled towering Quindío wax palms to tally the population of the Yellow-eared Parrot, was also responsible for bringing the bird back for the brink of extinction by educating farmers on the importance of tree preservation and forest management. The Ceroxylon Quindiuense is not only one of the major attractions for tourists visiting the coffee growing department of Quindío in the Central Andes range – as it can grow up to 80 meters in height – but also the country’s national tree in which the Yellow-eared Parrot nests, feeds and reproduces. The felling of trees in protected cloud forests and harvesting of the palm’s elongated leaves to make crosses for Palm Sunday are just some of the man-made threats that have impacted the parrot’s chances of survival.

Cardona’s other community-led initiatives involved spreading a conservation message to youngsters from a yellow and green painted “parrot bus.” But sadly, in one of the world’s most bird diverse nations, protecting just one species, can be a death sentence. The biologist’s disappearance and assassination by a criminal organization occurred less than a year after his work confirmed that the Yellow-eared Parrot recovered in population from less than 100 in the late 1990s to more than 2,800. Research that was published in January 2020 by the University of Newcastle and BirdLife International. “Without Gonzalo, there would be no Yellow-eared Parrots,” stated Sara Inés Lara, executive director of Colombia’s bird conservation foundation ProAves, and which operates several reserves including Loros Andino which the trained biologist managed for 23 years.

Cardona’s legacy, however, is inspiring future generations of environmental crusaders with the creation of the Young Conservationist Ambassadors of the Yellow-Eared Parrot workshop. The foundation recently organized a birdwatching expedition and camping trip with youngsters from Roncesvalles to introduce them to the important world of conservation.

Thanks to the extensive experience that ProAves has in educating rural populations across the department of Tolima, and participation in activities planned by the Regional Autonomos Corporation of Tolima (Cortolima), the foundation received a donation of 4 Colombian bird field guides, 4 binoculars and 7 bird kits. And at the 2021 Tolima Bird Festival seven boys and girls were given their bird kits. Each kit consists of a bird field guide (created in collaboration with ProAves), colored pencils, markers, pencil sharpener, pouch and drawstring sports bag. With the help of these kits, the children can document in drawings some of the great bird diversity near their town.

After spotting different species in their natural habitat the children also learned to identify birds by color, beaks, feet and plumage. “These activities help all individuals, starting at a young age to learn to live in harmony with nature, value their region’s biodiversity and contribute to the conservation of natural resources,” believes Lara.