Instead of following the yellow brick road like Dorothy and Toto in search of the Emerald City, we just had to keep up with our man Jorge in a blue jacket, who would be magically transporting us on a sleek, renovated VW bus to the best of what the Bogotá Beer Company has to offer. Unlike the search for Oz, the beers and appetizers made us realize that there was definitely “a better place than home” on a Friday night.

Referred to as the “smallest brewery, biggest in Bogotá,” the BBC holds the distinction of being the only pub-brewery combination owned and operated entirely in the city. The idea behind the brewery was to localize what travelers from other major cities felt as a beer-drinking tourist attraction: a pub that taps local culture with award-winning brews.

Besides operating ten locations throughout the city, the BBC specializes in brewing without the use of corn, rice or preservatives—their secrets, a mastery of temperature and imported barley. Its brewing home is inconspicuously located in Chapinero, and this microbrewery will soon expand to the coffee region as capitals Pereira, Manizales, and Armenia prepare for the BBC “home-grown” experience.

You and five to seven of your buddies can bond with beer by buzzing the BBC Tour line to schedule a tour that includes private transportation. At the BBC brewery you learn about the BBC’s beer making process that yields 80-90 barrels of beer each day some of which is generously passed around in glass jugs.  You get to understand the different stages of the brewing process, learn about the BBC’s signature and seasonal beers, and even get insider information on the ingredients that make their beer just right for their demanding clientele.

Our brew master, Leonard Ramirez, who has been working at the brewery for six of the BBC’s ten years, told us about the daily-double production that includes roasted malt and U.S. grown barley.

The maturation and fermenting tanks hold the initial brew for several days during which it is perfected for purity and taste. By the time you reach the cold storage room where the hops are housed, you’re just a skip away from boarding the beer bus.

As I took my final notes from the beer antics stenciled on the brewery’s walls by such influential personalities as Martin Luther, William Shakespeare, and my personal favorite, “Beer is proof that God exists and wants to see us happy,” by Benjamin Franklin, the atmosphere in our tour group was electric.

The town through a pint glass

After the brewery tour, a chaperone meets the group to continue on to the pre-selected, three-hour itinerary of three pubs. We chose the BBC venues in Usaqúen, Rosales and the Zona Rosa. The official Tour pass, or more affectionately referred to as our “pass to happiness,” gets you at a reserved table, a pint at each location (or three pints in one location), and an appetizer per couple.  I would suggest ordering an appetizer in each location to keep your stomach full, as three hours is actually quite a stretch of beer-drinking time.

You can also order more beer and food apart from what’s included in your pass. We decided on staying at each pub for about an hour:  our first stop, BBC Usaquén (Cra. 6 with 119). As a part of the city sprinkled with its variety of kitschy shops and artsy clientele, the pub was packed tight with patrons who could also have been enjoying one of the current signature drinks: the Monserrate Roja, Chapinero Porter or Chía Weiss. The latter, a name alluding to both Chía, a community near Bogotá and to the German “Reinheitsgebot” law of 1516 that required all beer to be made with malted barley, water, and hops – despite the nomenclature, it was just a way of saying it was my favorite.

After being greeted by an expectant staff and the owner of BBC himself, Berny Silberwasser, our impromptu meeting didn’t stop us from corralling others into joining us for pictures as we gobbled down a gargantuan plate of nachos. Later, we found Jorge in his blue jacket and raced across the city to the BBC Rosales pub (Cr. 5 No. 71a-75).

With its after-work crowd with loosened ties and silenced cell phones, Rosales offered us some great conversation between innings of baseball game.  As another pint appeared at out table, the score became insignificant as we clearly had the best ticket in town.

Our next and last stop was the BBC, Zona Rosa (Calle 85 with 13), which was bursting with late-night partiers.  Luckily we did not have to worry about finding a table, thanks to the Tour, which calls ahead to guarantee seating.  We were reaping the effects of the BBC’s signature beers and our second helping of picada (a basket of deep fried heaven) in no time.

At 11:00 pm, snuggly wrapped in my scarf and reminiscing about our interesting and memorable tour, I began to think about how this experience would have been a perfect introduction to Bogotá when I was newly arrived.  As a young adult and a veteran of the pub scene, I definitely see this as advantageous for newcomers and for a reasonable price ($60,000.00), there is nothing like having a guided tour involving nightlife, beer, reserved seating and safe transportation. See for yourself… look for the blue jacket and the bus! 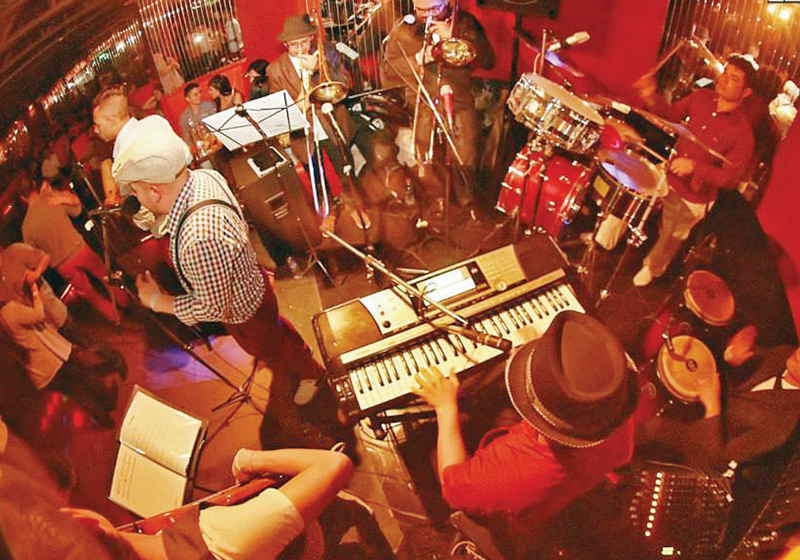