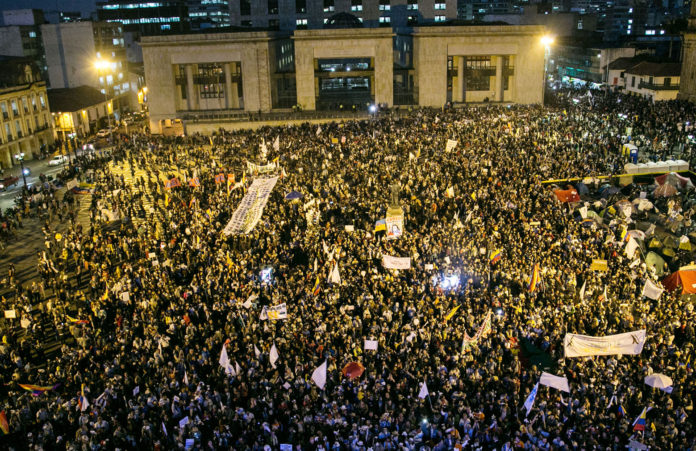 A thousand candles illuminate a sea of faces as the pall of would-be mourners is broken by a shout from the stage at the base of the Capitol steps, a shout that reverberates through the crowd like an electric shock: “Pueblo campesino, la paz esta contigo!” You can feel the mood turn; it lifts and changes direction like the tide, coursing with frazzled adrenaline through the veins of young and old alike.

As the man beside me passes the handle of aguardiente, the chant grows louder, carried first by the voices at the base of Simon Bolivar’s proud statue, then by the silhouetted forms crowded around the columns of the Capitol building, then by onlookers clinging to the lamp posts and balancing on the shoulders of their boyfriends. One teenage boy has climbed the wall of the cathedral and adds his fiery contribution to the chant while trying to find his balance in the shallow alcove high above the pavement.

For once the plaza’s pigeons are nowhere to be found as the chant comes to a crescendo, joined now by eruptions of the national anthem sung by a people who have been so regularly betrayed by their country yet refuse to abandon it. It is here, in Plaza de Bolivar a few nights after the October 1 vote renders President Santos’ peace deal moot, amidst a crowd of thousands, that I realize, not for the first time, Bogotá has tricked me.

It was not all that I thought it was.

My narrow idea of Bogota was but a sliver of the whole. This city, as always, was something more than I could define. And now, with the passage of the new deal, it adapts yet again.

Bogotá, Juan Gabriel Vásquez writes in The Sound of Things Falling, “is a mobile and changing city, an unstable element of seven or eight million inhabitants: here you close your eyes for too long and you might very well open them to find yourself surrounded by another world.” History tells us this ingrained unpredictability runs deeper than blood. It is like an avalanche of a thousand generations lost to a continent’s dashed dreams converging on a moment in history with sudden violence and ferocity. Has the noise of this avalanche ever been louder than it was in the moments after the much-proclaimed peace vote fell apart?

Four days before the vote, President Juan Manuel Santos and FARC’s “Timochenko” raised joined hands in a decadent, woefully overwrought celebration in Cartagena that skipped past hope entirely in the race to declare victory with a few strokes of a pen. They did not know, or had forgotten, that even in the land of García Márquez a pen doesn’t carry that kind of power. Three days before the vote the world rejoiced in Colombia’s pending peace with editorials claiming the official cessation of hostilities in South America after decades of war. Two days before the vote, polling predicted a double digit victory. But on Saturday, October 1, the night before Colombians went to the cardboard ballet boxes that served as tabernacles for the fateful communion, a pall seemed to descend on Bogotá, an obscuration akin to the heavy fog that washes out of the mountains and blankets the city in a grainy whiteness, leaving its streets and peoples indistinct.

Even after having visited different voting sites in Chapinero and seen with my own eyes the steady trickle of Colombians exercising their right to participate in the plebiscite, it is still only these half-formed shadows of people I can imagine going to the polls; rough sketches in the light early morning rain casting votes for yes or no, seeking conflicted peace or defiant justice in nearly equal measure so that the eventual vote tally is split so close both sides will eye each other in the days after with a newfound hostility; a barren, unmistakable recognition of the vast gulf between them. It was the horrid slimness of the vote margin – and the dashed expectations of the optimistic pollsters – which seemed to shock most. In the painful irony of this country, it is the proximity of the people’s vote which reveals the distance between them.

As news of the defeated referendum spread, we watched on television as hundreds of peace supporters in El Parque de Los Hippies wept in unison, their confidence in the future crushed by the indiscriminate hand of democracy in action. Outside the house where I first heard the news, drivers blew their horns in a cacophony of celebratory noise, exultant in defeat of a deal they had never believed in. There was shouting in the street. Despite the alcohol ban that began Saturday afternoon, drunken voices echoed and charged at one another in a joust for control of the moral airspace. For every voice proclaiming victory, there was another to bemoan defeat. All at once Bogotá seemed to have reached a cliff edge. That night, there was a sense among peace supporters that something had been irrevocably lost. No hastily awarded Nobel Prize could bring it back. On the faces of “Si a la Paz” supporters in Bogotá, a sense of anguished shock refused to fade even after the final vote count was broadcast. Each man and woman seemed to exist within the brutal solitude of the defeat.

But what, some of us asked ourselves in the days following the vote, is to be expected from a city that changes so quickly it cannot afford to make predictions about the weather? Where the beggar across the street grateful for a few loose coins one day is seen the next with a new suit? Bogotá, as Vásquez suggests, is caught in a cycle of continual reinvention, and what is reinvention if not self-renewal, a chance at another life?

This is a city known for its oblique seriousness, for its temperamental climate, for its isolation from the warmth that defines the other Colombian cities which rest more easily in the Western mind’s conception of what Latin America should be. Here high up in the Andes, Bogotá exists apart from Cartagena, that pearl of the Colombian coast, and from the restored beauty of Medellín. And yet in the days after Santos’ peace deal crumbled, the city was raw with emotion. Gone was the staid distance and quiet reserve that Bogotanos seem so often to embody, replaced instead with aggrieved, defiant student marches down Séptima and a refusal to quit the fight for progress until peace was achieved.

One need only have been in the Plaza de Bolivar that Wednesday night after the vote to have seen just how strong the belief in a peaceful future was. At dusk, thousands crowded into the city’s center bearing homemade banners, holding aloft candles whose spindly flames were protected against the breeze by carefully cupped hands, thereby illuminating with a thousand soft orange glows the hands that worked so hard to bring about new change.

There, just a few blocks away from the tiny apartment in Candelaria I’ve called my home since moving to Colombia, chants of “Queremos paz!” and recitations of the Colombian national anthem called for more than just outrage and anguish. No, here in the city center, among the streets missing bricks like a slow boxer’s mouth misses teeth, thousands of resilient Colombians declared in one voice that the pain of their temporary defeat would not dissuade them from their cause. Their country had had enough failed peace deals. This time, there would be no waving of the white flag. And they were right.

On Thursday, November 24, Santos stood in the Colón theater just a few blocks from the Plaza de Bolivar and, possibly humbled by his defeat in October, risked a sense of déjà vu to declare without festal pomp and ceremony that Colombians would “give peace a chance.” Critics of the deal, chiefly former president Álvaro Uribe Vélez, have already made it clear the revised version does little to calm their biggest concerns. But this time around, Santos was unwilling to see if Colombian voters agreed with Uribe. The president will entrust his legacy to his majority in Congress instead. For those of us who were there in Plaza Bolivar that night nearly two months ago, and for every Colombian who has had enough of violence, we can only hope that this time, a bullet-casing pen proves more powerful.