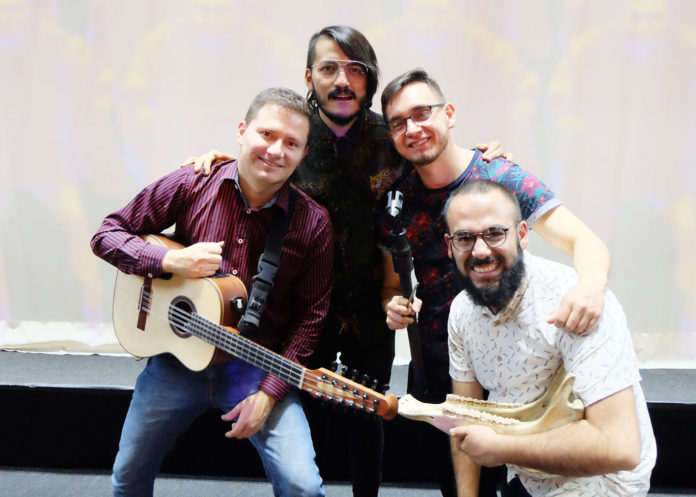 When Los Rolling Ruanas burst on to the musical scene with their debut album last year titled “La Balada del Carranguero” (Ballad of the Carranguero), Colombians discovered a sound that fused traditional folk music of the Andean highlands with an ecclectic blend of rock and ska. But, what really knocked listeners of their musical pedestals, accustomed to genres that get plenty of air time, including vallenato, cumbia, and bambuco was that these four musicians didn’t take to the stage in black leather jackets, but instead, in thick wool ruanas worn by farmers in small villages across Cundinamarca and Boyacá. As the emblematic grey accessory worn by campesinos, this “old school” attire is at the heart of Los Rolling Ruanas’ musical soul, and a name that captures the imagination, as well.

“It just came to me out of the blue, to call ourselves Los Rolling Ruanas,” remarks Fernando Cely, who plays requinto – a small guitar tuned a fourth higher than the standard classical instrument. Cely, who is joined by childhood friends and the band’s other three members – Juan Diego Moreno, Luis Guillermo González and Jorge Mario Vinasco – believes that their growing reputation, as one of this country’s most original bands to emerge in recent years, has to do with their admiration of music that is mostly associated with rural Colombia, and listened to by those who wouldn’t distinguish a Coldplay song from one by Lenny Kravitz.

Bridging the generational divide also comes down to making the instruments electric, such as a 12-string tiple played by Jorge, and essential in any carrangua quartet. Boost the strumming and plucking with sophisticated soundboards and amplifiers, and you have the raucous, troubador-worthy ballads of Los Rolling Ruanas. “Even though we play rock, we never want to abandon our cultural roots,” affirms Luis Guillermo, who picked up the guitar at an early age, and found his musical calling after graduating from university.

On the eve of the release of their second album, Sangre Caliente (Hot Blood), which includes 13 original songs, the band gave a one night show at the iconic Teatro Colón last month, during which audiences familiar with their first singles, Maleza and María Guadaña, leapt out of their seats to cheer on a band whose lyrics make reference to the coal towns of Boyacá, the sprawling steel mill in Paz del Río. “Son of the sun and steel, he takes his tiple, ruana and hat. This is the Ballad of the Carranguero,” opens a refrain from their hit single. “He passes nights and days under starry skies, where nobody walks by his side. Twelve strings are his guide.” What began as a project of uploading covers by The Beatles and Rolling Stones to a Youtube page soon turned viral, and Los Rolling Ruanas, were asked by prestigious venues, such as Teatro Julio Mario Santo Domingo and Teatro Colón, to present their iconoclastic sound to new audiences.

Performing live put demands on the group to strengthen their musical identity and consolidate their interaction on stage. After a comprehensive tour of Colombia, which included 50 engagements, playing in towns where bands from Bogotá usually don’t perform, gave the musicians the opportunity to broaden their horizons, and a more confident sound for Sangre Caliente, without compromising the band’s earthy, folksy, rhythms.

“We like to connect generations so people of all ages can truely appreciate the rich musical heritage of Colombia,” says Jorge Vinasco. A native of Pitalito, Huila, in southwestern Colombia, he is the only non “cachaco” (popular term to describe those who were born in Bogotá) in the band, and remarks how “any town in Colombia that wants to be taken seriously has a traditional band.” Jorge was influenced at an early age by his grandfather who played saxophone for the tuxedo-wearing orchestra of Lucho Bermúdez. Then, he took it upon himself to explore other genres, from the wailing cumbia of the Colombian coast to pasillos and bambuco of his native territory.

The punctuated format of carranga also weaves in a dance with short steps, in which partners nudge into each other, but never embrace like a waltz. These abrupt movements resemble the dance moves of ska, even the lurching, head banging of Heavy Metal. The union of rural customs with urban expressions is exemplified in the band’s latest release, with songs such as Caballo de Acero, Rajaleña, and the eponymous title of the album.

For guitarist “Nemo” González, their music is about remembrance, not nos- talgia, as they feel the Colombian countryside is a source of celebration, wonder, and where great stories are handed down from generation to generation. “We enjoy the simple aspects of life in a small town, such as going to the village dance, sitting in a small tienda over beers with friends,” remarks González.

The band recognizes that their success has been vertical, yet they believe it is important to “play for the music,” rather than monetary gain. “We want to have fun with what we do,” says lead vocalist Juan Moreno. “Tell stories with our lyrics that make us laugh and reflect upon what it means to be Colombian.”

Visit any Colombian household, and chances are you’ll find old vinyl records by masters of traditional music such as Silva & Villalba, Los Carrangueros de Ráquira, and Lucho Bermúdez. From the brassy big band sound of Carmen de Bolívar to the harmonious duets of harpists in the Eastern plains, Colombia’s musical foundations are indelibly linked to their geographical area, and each as musically diverse as the landscape.

Much of the music is rooted in a sense of isolation, of living in remote corners of the country surrounded by farmlands and animals. Songs of love, lost love and chances of never finding it again are popular themes in traditional music. However, the litany of unrequited love, also endemic to carranga, has been supplanted by The Rolling Ruanas with witty lyrics that also play on words. In Sangre Caliente, one track, Fan Django, is a direct reference to both a musical style– fandango – and Quentin Tarantino’s stylized Western.

Los Rolling Ruanas also wanted their new album to have a warm, vintage sound, laying down all the tracks on tape and recording in the studio as if they were on stage. The stripped-down arrangements were then set to vinyl so that those who want to buy Sangre Caliente can have a physical copy of the album that not only sounds more tienda-authentic, but also abandons the often hollow sound of a digital download.

Even though Los Rolling Ruanas are available on Spotify and have reached a global audience thanks to virtual platforms, they are uncompromising when it comes to making music that withstands the test of time. “Just like the music we grew up with, we want future generations to one day be able to go back to our records and say: ‘this is really good,'” remarks Juan Moreno.

The home release of Sangre Caliente will be followed by the band’s first international tour this summer, with concerts planned in Philadelphia, Washington, New York, Chicago and Minneapolis. The band will also begin to charm audiences in Mexico and Argentina, countries with strong connections to traditional music, but with large urban areas where hip-hop, rock and reggaeton are extremely popular.

“Our music is like a guiso (tomato and onion sauce) served with potatoes and yucca,” says Fernando jokingly. “Now, the time has come to give others a taste of our music.” And certainly, there’ll be plenty of curiosity surrounding the poncho and why these four lads from Bogotá, who grew up listening to four lads from Liverpool, prance about on stage, singing songs about the harvest and verdant fields of a not so imagined landscape. So, rock on, with your ruanas!