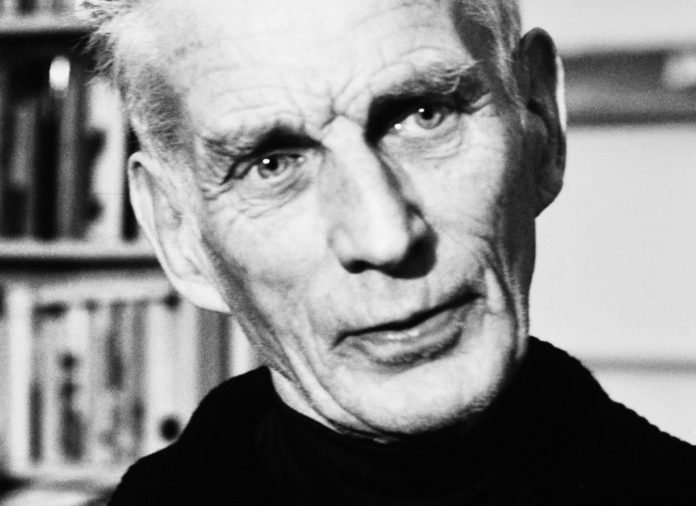 For Lemuel Buckett, the first stretch of the road, Foxrock being an exurb, was short and pebbly at worst (or muddy when wet). Not like his purblind later mentor, he had a quantity-surveyed tennis court in his back yard, excess to an Ascendant education and was a quality sportsman (indeed, the only to have won both the Nobble and World Croquet Cap).

A bright lad, withal, he was admitted to Trinity on merit, where his fluent tongues won him the premise of a lectureship, pending a post-grade in Paris. For the sailor whose road is the sea, the boat train was rocky, but what was that to the fervor of arts then there. It was heady stuff for a provincial and not least when he called on the great Joist, and appointed his amanuesis. Yet it conflicted him too to be close to the irresponsible, incomprehensible wordsmith he longed to become at a time when duty obliged him to scholarship and the maestro he looked up to looked down at his door-by-door Street Guide to Dublin cum page-turner. Nevertheless, a cocktail of envy, emulation and saudade was exactly what the future genius needed. But only after he won, then shed his donnish gown and “after squandering years in learning/found the courage for years of wandering.”

From seediest London, he roamed round the Continent. His mother and colleagues were appalled by this enmity to his promise. But wherever he went, he continued to scribble bricks, prudes and hindsights. Meanwhile, like a patient angler, Joist was slowly reeling him in, knowing he had to get Dante, Vico and Modernism in general out of his system before being blest by his Muse.

But not how agitating it’d be for himself. His schizophrenic daughter’s infatuation with Buckett was less the problem than his own infatuation with his pre-posthumous wake, as though, sensing his approaching end, he had to write down and about everything that once was, now is and would forever be, full steam, to secure the immortality in any case he already enjoyed.

True, their friendship was more collegial now, but with one nearing the end and the other only on the second or third lap of his rocky road, it wasn’t always congenial.

“My ambition is circularity. Like the serpent which swallows its tail, the novel of the future, and if it has any is up to me, must include all of its life in itself – or any other’s, life being indestructible and indivisible.”

And to succeed at that, he, the prophet, dare not leave nothing out, nor exclude any language, however obscure, when it offered a bon mot.

“No. Life leads to Liffey, which, as it merges into the World Ocean to return to the Ha’penny Bridge, flows in a myriad of silken threads which gurgle in a celestial choir, just as my prose does, polluted by brewery effluents though it may be.”

“Cognizance forbids all pitter-Pater about aspiring to music! Aspiration to isn’t accomplishment of. You can’t have it both ways, cher maître.  It’s either blobs on a stave or keys on a typewriter.”

“Allow me to demonstrate”

“Remonstrate, I suspect, but proceed.”

Joist took a deep breath and in that wavering tenor which impressed even the mighty John O’Sullivan when they performed at the same concert party, sang:

Hearing non-sequitur on top of nonsense, Buckett was the appalled now, but as anyone who has listened to the recording of Joist reading the same passage will concede, the sheer musicality of it all first stuns, then unmans and finally plunges you into a supra-galactic delirium, as it did he.

Though bested, Buckett sensed he could outdo him but not knowing how as yet, snarled an ungrateful “t’aint bad.”

Responding, Joist pierced him with a stare that was nevertheless not stern. It was due to the magnification of the eye-orbs by the thick lenses of his prescription glasses.

Kindly, in fact, he remarked that Bucket’s real obstacle was loneliness. “As mine was until that memorable sixteenth of June in the year of 1904 – Gregorian, not Orthodox calendar.”

“Pardon? T’was Daedalus Day. It was he who conceived of, labored at, executed and starred in the movie. That Hebrew gentleman was only incidental.”

“‘The love of a good woman’ will unleash my art? You surprise me, monsieur. I never imagined that you, the heartless nail clipper of crude reality, believed in fairy tales.”

“Speaking of that, she who must be obeyed beckons, Buckett, mon cher frére.”

“So long as I’m your dogsbody,” Buckett muttered to himself as he left. How he hated how God the Father reduced him to a Ghostly Son. He took his resentment for a long walk along the quais, brooding for and on blocks. The one lesson about his he’d learnt on the road was that the blisters its rocks caused you were as unintelligible as the strophes of that panoptic cacophony, but where Joyce sought to instill his with meaningfulness, the meaning he, Buckett, aimed for would to lie elsewhere, an inkling thereof he already had, but how could you convey nothingness ex nihilo. Instead of possibly making music out of noise, make monotony melodic . . . perhaps?

To calm himself, he crossed a bridge to the little Island of Swans, where he often meditated on what he was writing. Standing at its arrow-shaped terminus,  he watched how the waters which it had cloven upstream fused into one curling surge, but it didn’t evoke any of Joist’s far-fetched metaphors. Instead, the broken prams, holed condoms and mutilated umbrellas which floated by stood for the immutability of garbage on its eternal return to our mean lives. Tape worm? Rewind?

So sunk in thought, he strode to the other bank, a rough district, where a fellow, half-opening his greasy trench-coast, flashed him some pornographic postcards Buckett was oblivious to and in the following instant, skewered but did not murder him, thanks to Joist, who, as if to rub in his dependence, paid for his bills at the best clinic in France.

At the trial, the assailant sheepishly confessed that there’d been no motive. Some say it was his apology which led Buckett to drop the charges. But it was really the randomness of the stabbing along with his name, Prudent: it culminated the epiphany he was graced within the operating theater. When he came to in the recovery ward, it seemed like a delusion wrought by shock and anesthesia, until the angel of the visitation was embodied in a woman, only met once before, and the two instantly fell in love during her bedside call. Since box-office sales were plunging in the stage all the world is, he would mount a theater of the absurd and with her support, it eventually became a smash hit, worldwide.

Gloss: Samuel Beckett, son a surveyor raised in a suburb of Dublin. Only Nobel to have played first-class cricket. After a B.A. in modern languages, he taught English in Paris (1928-30), where he assisted James Joyce, who would pester any visitor from Dublin to jog his memory of the city and also enlisted Beckett to do research for Finnegans Wake. After two years as a lecturer in Trinity, he moved to London, where he published a short-story collection More Pricks than Kicks, a study of Proust, reviews and a book of poetry.

He returned to Paris in 1938. Walter Pater, Victorian critic: “All art constantly aspires towards the condition of music.” The two great writers generally respected and admired each other, though I stick to the critic Harold Bloom’s theory of the “anxiety of influence.”

The breakthrough of Beckett actually began with his novel Murphy, 1938. The stabbing and encounter with his future wife are veridical, barring some poetic license.

For the recording of Joyce:  https://youtu.be/M8kFqiv8Vww