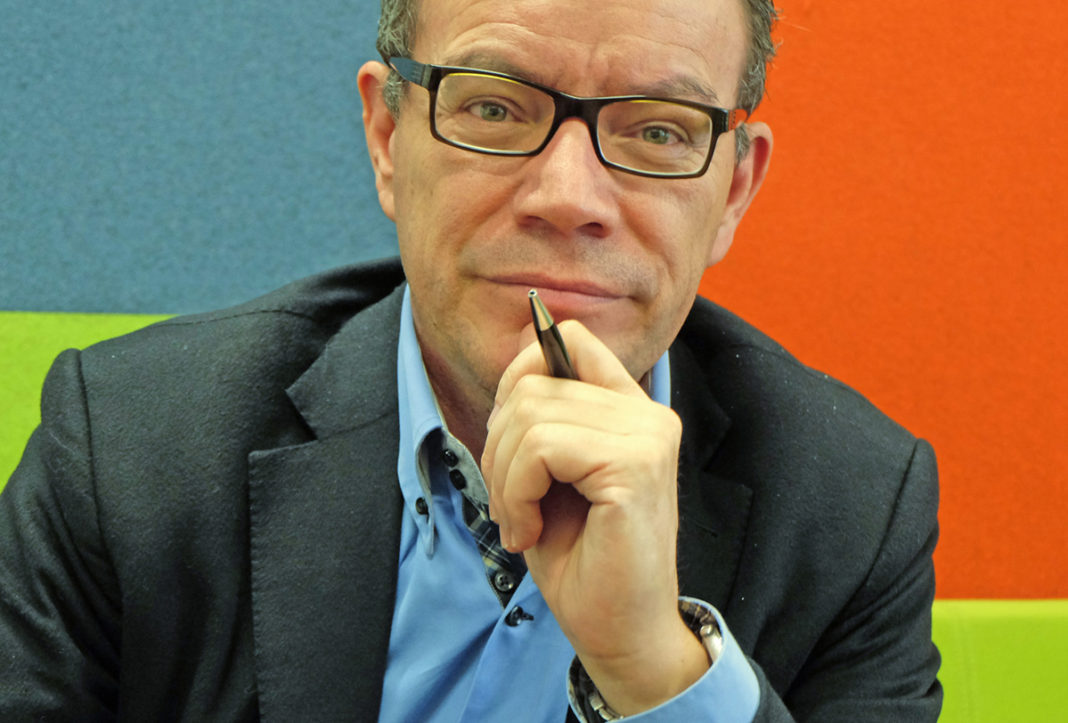 When the graphic designer Vladimir Flórez breathed life into a series of lines drawn on a blank sheet of paper, he created a woman who would speak to women all over Colombia on issues of health, romance, sexuality and money.

The imaginary ‘Aleida’ turns 20 this year, and for caricature in a country of political pundits and primetime satirists, this milestone is nothing short of a celebration. For two decades, however, there has been one aspect of Aleida’s life invisible on the pages of the magazine she graces every week – a companion; her editorial soul mate. “She is still looking for love,” claims ‘Vladdo’, the nom de plume of the man behind this heroine. “And so am I.”

Born 1963 in Bogotá, this trained graphic artist who with the stroke of a pen manages to distil political commentary and graphic wit is a much admired member of the Colombian homestead. Every week his column in the national daily El Tiempo slips under the front door. He is beamed into bedrooms with his talk show on current events, and is a cartoonist who from the opinion pages of the leading news magazine Semana lambastes the corrupt and those who abuse their power.

‘Aledia’ rarely gets involved in politics, for she is the benign Vladdo. From his first editorial ventures in the 1980s redesigning small and influential regional newspapers, to his mastering the art of typography and layout which earned him two prestigious awards from the Society of News Design, Vladdo has not only elevated the nature of cartooning to political commentary, but in doing so, has inspired a whole generation of aspiring graphic artists to learn the tricks of the trade, work with publications and contribute to improving Colombian editorial design.

Paper is close to the heart of Vladdo ever since he began illustrating for the newspapers La República and El Siglo at a time in this country’s history when “humour” was equated with slapstick or lampooning ethnic minorities and those with physical impediments. For ‘Vladdo’ there will never be anything funny about a stammer, a lisp, or the color of one’s skin. Being “funny” is just too simplistic. Humour can’t have editorial value unless it’s another form of communication on political and social concerns that touch the collective.

Taking on the powers that be, especially those that were causing so much harm to this country in the form of drug cartels, Vladdo’s caustic sense of comic relief led to the creation of an informal association among cartoonists known as El Cartel del Humor, the Humour Cartel. This play-on-words became a signature to Vladdo’s editorial style and visual wit. The designer’s current initiative with industry professionals to promote the exchange of ideas “beyond just drinking coffee” is an association known as “Ink Visibles”.

Sharing a technical understanding of design, combined with acute journalistic skills sets Vladdo apart from many of his colleagues, who although dexterous with their pens, miss the nuances of language. “As a caricaturist one can exaggerate, but never invent,” said Floréz. “No matter how critical you want to be, you must base opinion on real events. My columns are not ‘funny’ but are often absurd. That’s because much of what happens in Colombia is ‘absurd’”.

Fierce with a pen but never vengeful with his words, Vladdo takes on the sanctimonious, the populists and anyone with a dubious political agenda, even if that means getting under the skin of presidents past and present. Vladdo’s vitriolic columns in El Tiempo of former president Álvaro Uribe Vélez had raised, on many occasions, the ire of the leader’s many followers, but shows the importance given to freedom of expression in a country where too many have been forced into exile or worse yet, assassinated for their opinions. “I’ve been doing caricatures 20 years before Uribe became President and I’ll keep doing them, hopefully, in 20 years.”

In a country where one scandal can quickly replace the next, cartoonists and editorial illustrators have no shortage of inspiration, but as Vladdo insists, their role should be one of investigation, taking on serious issues without falling into the trap of formulaic humour.

As technology changes the way news is presented and billions are invested in digital platforms, Vladdo breaks away from doom and gloom publishers that have been announcing the death of newspapers for over a decade. “The editorial industry will keep on transforming itself,” believes Vladdo. “But one of the root causes of dwindling circulation among leading dailies, isn’t the newsprint, but that fact that publishers are not giving young people the content they want to read.”

This passion for all things newspaper-related led the designer to create in 2005 his own grassroots publication Un Pasquín that circulated for free in Bogotá, with over 50 editions. The editorial line of this compact size newspaper whose name in English translates as “The Rag” was to take on serious issues regarding Uribe’s wartime presidency.

In 2011, Vladdo “temporarily” put his Un Pasquín “in an induced coma” to explore other media possibilities, such as a talk show on national television, ongoing redesign projects with international newspapers, and his editorial duties at Semana magazine.

For a designer who has received Colombia’s most prestigious journalism awards from the Premio Simon Bolívar and is a regular at Cartagena’s literary Hay Festival, there is always a new venture in the works. Even though he is guarded about his future projects and smiles his way through scrutiny and controversy, the commentator remains a designer at heart. When it comes to issues of the heart, there is one person many Colombians turn to and more often than not, there is incredulity when they realize the creator of a temperamental and stylish woman is really a man.

Ask any stranger on any street which woman speaks to their mothers, wives or girlfriends and the chances are you’ll get one answer: Aleida.

Even though Aleida skipped being a teenager, as she turns 20, her creator has planned for the Bogotá International Book Fair (FilBo) to release a special edition of his alter ego’s most coveted phrases and illustrations, and which, no doubt, will appeal to all generations.

Colombia’s Bicentenary: The landmarks of the Liberator