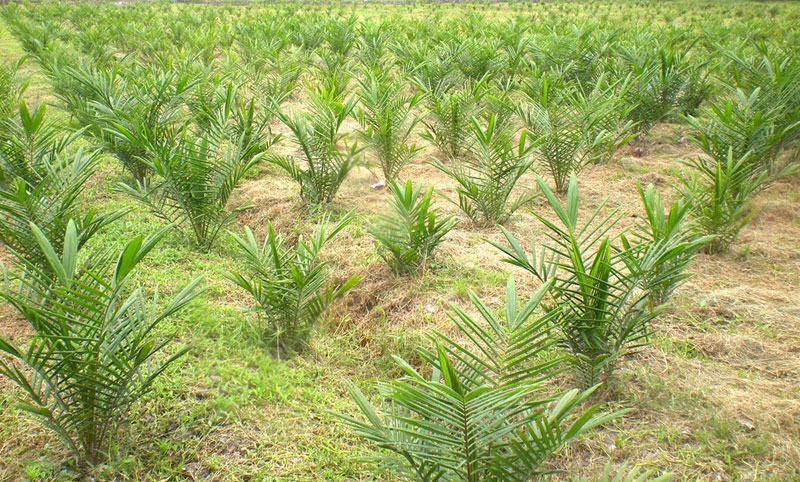 It’s difficult to go very far in Colombia without seeing a palm tree. There are more than 2,600 different varieties of palms in the world, and Colombia is home to more varieties than any other country on the planet! The official national tree of Colombia is the ‘wax palm,’ the tallest of all the palm tree varieties, and one which grows exclusively in the high-altitude valley of Cocora in the department of Quindío, in northwest Colombia. The wax palm can grow to a height of 200 feet and can live to be 100 years old!

But it’s not the wax palm or any of the hundreds of other palm trees that are native to Colombia that is getting the attention these days. Instead it is the African Oil Palm.

Oils high in trans fats have been commonly used in restaurants for deep frying. Recently, however, the health threat posed by high-cholesterol trans-fat oils has come under increasing scrutiny – and criticism.

While the Mayor’s effort got much of the attention, his action merely reflected a growing global dietary trend away from trans-fats.

The well-intentioned banning of high trans-fat oils has predictably led to the replacing of those oils with low trans-fat products. It turns out the low-trans-fat drug-of-choice is palm oil – palm oil from the fruit of the African oil palm tree – and demand for palm oil world-wide is surging.

The African oil palm originated, as its name implies, in West Africa, but it has since been planted successfully in tropical regions within 20 degrees of the equator – including Colombia. Colombia is not the world’s largest producer of palm oil – that honor goes to Indonesia – but Colombia is the fastest-growing producer of palm oil.

Needless to say, there are environmental, economic, and even cultural implications to the rapid growth of the palm oil industry in Colombia.

Here’s a quick look at the good, the bad and the ugly of palm oil and its production:

First, the good: Palm oil does have health benefits when it replaces higher trans-fat oils in the diet. Palm oil also has the potential to be an important cash crop in Colombia and a valuable export commodity. Palm oil could replace less efficient crops, and utilizing non-productive or under-productive farm land might actually benefit local farmers. Finally, palm oil is also a potential bio-fuel, and proponents argue it could reduce our dependence on fossil fuels.

That’s the good. What about the bad and ugly? Globally, the biggest problem with palm oil is the massive deforestation that has taken place to accommodate groves of African palms. This has been a huge environmental problem, particularly in south Asia. Deforestation is a significant problem in Colombia, as well, although there have been efforts to convert existing agricultural land from other crops into oil palms as a way of reducing the amount of deforestation.

But deforestation continues, and the effects are far-reaching. With palm trees replacing natural tropical foliage there is increased rainwater runoff and erosion as palm orchards typically offer very little in the way of ground cover growth. This adversely impacts amphibian, reptile and even fish life in those waterways, as well as a reduction in the quality of fresh water supplies.

In addition to the effect on watershed, deforestation also has a profound effect on bird and mammal habitats. In south Asia deforestation related to palm oil production is being blamed for the near-extinction of the orangutan due to loss of natural habitat. In Colombia it’s the loss of habitat for its vast number of bird species that is the principal concern.

On a global scale, however, the real disaster associated with deforestation is the loss of the carbon absorption and the oxygen production that is the life-sustaining function of the world’s tropical forests. But it’s the cultural impact of palm oil production that may be Colombia’s greatest challenge. Encouraging local farmers to replace less-efficient crops with African palms sounds good on the surface. The reality has been more problematic.

The problem is the all-too-common ‘land grab’ that typically accompanies the growth of palm oil farming. Local farmers – the campesinos – are promised a new cash crop and a new future growing palm trees on their land, only to find down the road that their land has been taken away from them – sometimes para-legally, other times at gun point. The recent farmers’ protests throughout Colombia were a response to a wide range of issues, but the forced loss of their land was one of the most contentious.

So what’s the bottom line? Is palm oil good, bad or ugly for Colombia? Of course there’s no simple answer. Like all of Colombia’s environmental challenges it will require political leadership that is focused on people and the land, not on short-term economic gain.

Colombia’s greatest resources are its biodiversity and its cultural diversity. Maintaining the harmony of both is Colombia’s biggest challenge and opportunity in the future. Perhaps the iconic palm tree can come to symbolize one small but important victory in the preservation of that harmony.