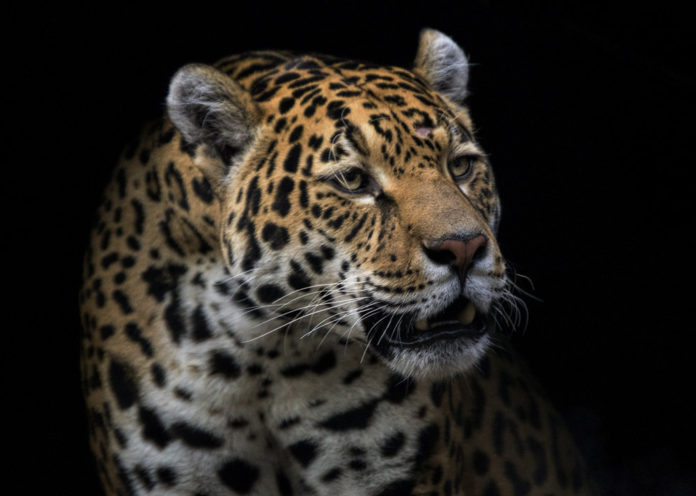 The “Jaguar Corridor” is a historic link that extends from Mexico all the way down the spine of Central America, crossing the inhospitable wilderness of the Darien Gap, through Colombia and into the Amazon basin – the last stronghold of the species.

Logged in the middle of this transcontinental corridor is the 110-kilometer Serranía de San Lucas, a range that cuts across central Colombia separating the watershed of southern Bolívar department with the Magdalena River and Eastern Andes. This isolated tract of biodiverse forest is vitally important for jaguars if they are to have longevity as a species. But the forest is also rich in much more than biodiversity: mineral deposits – gold, in particular – and which for centuries have been exploited by artisanal miners, and during the last two decades, by illegal armed groups.

The Serranía de San Lucas is an integral part of the Jaguar Corridor, and a bridge that connects the animals of the north with those in the Amazon Basin. For Dr. Esteban Payán of the large cats conservation group Panthera, this area is a “key stepping stone” between these populations, and has allowed a continuous ow of genes. But the jaguar (Panthera onca) is listed by the IUCN as Near Threatened at a global level, and a study released early 2017 in the journal Oryx found that outside the Amazon Basin, most populations should be considered either endangered or critically endangered. In this sense, the jaguar population in the Paramillo-San Lucas forest area would be listed as critically endangered.

“The Paramillo-San Lucas complex is really critical,” said José Gonzalez- Maya, director of PROcat Colombia and a coauthor of the study. “It’s the only place in northern Colombia with a good population of jaguars.” He said the area is probably more important to the survival of the jaguar than any other region in the entirety of northern South America.

But it’s not only an important spot for jaguars; the Serranía is home to a plethora of bird species, as well as populations of spectacled bears and at least five species of monkey.

Relatively few studies have been able to penetrate San Lucas over the years. A study conducted between 1999 and 2001 by the bird conservation organization ProAves found more than 360 species of birds, 11 of them listed as Endangered. They dubbed San Lucas the “least known and most interesting area in the Western Hemisphere.”

Paul Salaman, CEO of the Rainforest Trust and one of the founders of ProAves, led three expeditions to San Lucas in the late 1990s and early 2000s, and is certain that undiscovered species lie in wait within its high elevation cloud forest. He saw his first wild jaguar in San Lucas, but believes the real gems that must be conserved are the plants, the birds and the amphibians in the reaches of the mountain range. That area, he says, “really is the treasure trove of biodiversity.”

Discoveries of gold deposits have earned San Lucas the reputation of being “the largest gold mine in Latin America” or as one gold mining conglomerate claims – “the true El Dorado.” Illegal gold mining is rapidly depleting Colombia’s biodiversity, and once pristine forests of the Serranía no exception. The country’s last remaining Marxist guerrilla group, National Liberation Army (ELN), maintains a strong presence in the region and control many illegal gold mines.

But, not all the miners are illegal, nor all mining necessarily bad, says Gonzalez-Maya of PROCat. Traditional miners carry out their livelihood as a means of survival. Even though estimates are uncertain, sources claim there are as many as 30,000 miners working in the area, some illegally, others not.

While mining concessions in the Serranía de San Lucas have been given to legally operating mining companies, development has been delayed given attacks by the ELN against infrastructure, and the fact the 2,000-strong guerrilla has a history of kidnapping mining staff who venture into the region. As the long-standing security risk begins to ease with FARC’s recent demobilization and on-going peace talks in Quito between ELN and the government, there are concerns that previous “no-go” areas like the inner reaches of the San Lucas forest, could become a free-for-all for unconstrained mining and development. According to Gonzalez-Maya, last year saw Colombia’s highest deforestation rate in 20 years, most of it occurring in lands previously held by insurgents.

The fight to protect the endangered jaguars who roam the San Lucas could be resolved if the Colombian government designates the region a National Park. This seven-year battle has been waged largely by a group of NGOs and National Parks of Colombia. Payán hopes that the process will be completed within a year. But this is far from assured. San Lucas’s situation became more perilous in July when the Colombian government announced budget cuts for 2018 including those allocated to Parques Nacionales.

“It’s the most important park that we should create for the jaguar,” believes Payán, as a park not only ensures the species’ protection, but also empowers locals, giving them a sense of ownership over the land. “People who live in the area are coming around to the benefits of protecting “‘their territory,'” Payán said.

Gonzalez-Maya agrees that creating a protected area within a larger “conservation mosaic” would allow the best of both worlds: preservation of one of Colombia’s most important biological areas while allowing local people to continue to earn a living. It would work by protecting a core central area, principally the higher parts of San Lucas, but also some of the lower lands, which have seen the bulk of development so far.

Proponents of a national park say that, ideally, mining, farming and other practices would continue, but in a way that is much more managed to reduce environmental impact. Drinking water would be cleaned up and mercury-free for communities and, importantly for the jaguar and whatever undiscovered species may be out there, a protected and undisturbed chunk of forest would remain.

They concede that there is a long road ahead, one that must be traversed as quickly as possible if important San Lucas habitat is to be saved in time. But those who are fighting for protection remain confident that enough of the area’s forests can be protected to ensure a future for the jaguar corridor and the human communities that depend on it.

“It’s hard, it’s a race,” said Payán, but he remains optimistic. “It is really inspiring to see that there’s still a realistic, but also romantic notion, that we can maintain connectivity along the historical range of jaguars.”

“As long as we keep on having strategies that affect large-scale landscape protection, we have a chance of conserving it.”

A longer version of this article appears on mongabay.com. Reproduced under a Creative Commons license.