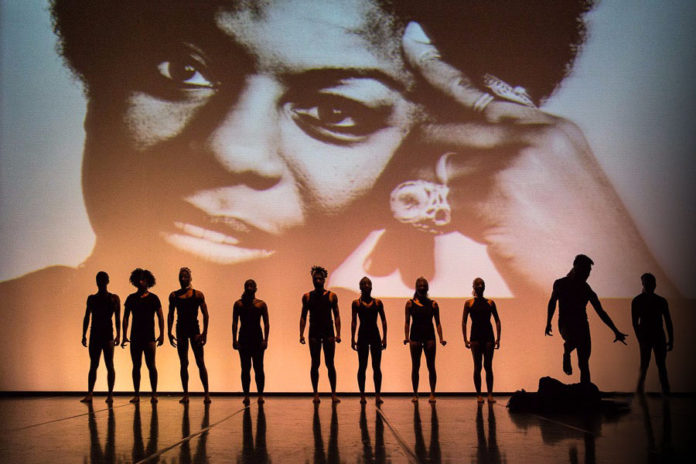 The great Nina Simone composed in September 1963 “Mississippi Goddam,” one of her most angry songs about racial injustice, created immediately after four black girls died in the bombing of a church in Birmingham, Alabama.

This song expressed her pain and determination to be part of the Civil Rights movement. Last Sunday on May 31, her daughter Lisa Simone Kelly published on her Instagram account a fragment of a famous concert by her mother, where she predicts the revolution that is taking place in the U.S today, detonated by the vile and public murder of George Floyd by four policemen in the Goddam city of Minneapolis.

In 2017, I met Lisa Simone at a concert she gave in a Paris suburb. I had created in 2015 for 32 dancers from El Colegio del Cuerpo, (The School of the Body) a tribute to her mother that I called NEGRA/ANGER (lucky anagram that I discovered thanks to the corrector of my iPhone). Black (female)/Anger.

No other word defines Nina Simone as much as Anger: from the discrimination she suffered as a child to the frustration at not having managed to be the first classical African-American pianist in the United States. That was her dream.  Simone was not admitted to the Curtis School of Music in Philadelphia…Goddam! Because she was Black! Nina never got over this trauma and whenever she could she talked about it, cried and bled from the wound.

Many tragic events in her life and that of her African American brothers and sisters made her at one point – like Nelson Mandela – embrace and defend violence and armed struggle. To Martin Luther King himself, an apostle of pacifism, Nina snapped her rage at his face: “I don’t believe in non-violence like you do.” She equated rage with fire. In an interview, she stated: “I do not sing out of anger, but out of intelligence […] anger is fire and fire moves things.” Toward the end of her life, however, she said one of the most hopeful and revealing phrases about the healing and reconciling power of art: “My life was a constant struggle between blacks and whites: I found my balance between the black and white keys of my piano.”

Lisa came to see our tribute to her mother in Aix en Provence, very close to Carry-le-Rouet, the small town in French Provence where, in 2003, the so-called priestess of soul died alone. Since then we have established a beautiful friendship with Lisa. Hurricane Irma prevented her from visiting Cartagena when we were going to present our manifesto against racism in her honor at the San Felipe Castle. I had told her a lot about Cartagena de Indias, the city of “silent apartheid,” as I like to call it. After reading her Instagram post, I sent her this message: “In these dark days, your mother’s spirit is a flame of dignity and beauty, but also of rage. NEGRA / ANGER!”. Lisa immediately replied with this powerful message that, with her permission, I transcribe:

“The virus is no longer the top talking point in America. It has taken a temporary backseat to a far more ancient and equally pervasive disease triggered by the murder (witnessed and watched in real-time ) of yet another black man.

I am choked by the plethora of memories (even those stored in my DNA) evoked, for we have literally traveled back in time! Different date, same sickness, same pain.

I want to howl. Tears are ever near. Meditation is keeping me on an even keel.

My mission is one of hope and light, yet I cannot connect to my smile. Rage and Grief are on deck. So, I choose to acknowledge Anger in this moment. Its energy, if channeled in a discriminative manner, is a force that brings inspires and affects Change.

Filled to overflowing that even writing this message is difficult. The words tumble over themselves. I see and hear my mother, and countless others she walked and marched and fought beside….who were my Aunts and Uncles. Many have crossed over. They are ever with us, free and filled with love and compassion.

Faith has kept us going when we’ve had nothing else! And that faith is being tested yet again as this stage of a purification process continues to run its course.

Racism’s roots run deeeeeeep. It is a reflex for many, therefore it is not even a conscious choice. It is taught to our children in their formative years. It is a learned behavior/reflex.  True Healing has to start with the very young. Speaks volumes still.”

About the author: Álvaro Restrepo is the founder and director of El Colegio del Cuerpo (The School of the Body) in Cartagena, Colombia. The award-winning dancer, choreographer and social artist is also a guest teacher at the Harvard Dance Center.