Navarro Wolff’s apartment is austere. White bare walls. A small orange tree next to the window overlooking the back yard of a university. On the kitchen counter neatly organized correspondence and boxes of tea. It’s hardly the opulence one might expect from a politican who has served his country for more than two decades and an ex guerrilla who ran for President three times. “We did quite well, didn’t we?” asks Antonio Navarro Wolff enthusiastically, referring to his achievements.

Leaning up against the fireplace, next to a wood carving of Simón Bolívar is an item of emotional impact. A framed Black and White portrait of his close friend and political ally, Carlos Pizarro León-Gómez looking out into a void, beneath his characteristic white straw hat.

Carlos Pizarro, the charismatic commander of the M-19 guerrilla movement was gunned down April 26th 1990, at age 39. Having forged a peace agreement with the government of Virgilio Barco a month earlier, and having destroyed their weapons in a football field in the southern department of Cauca, the 1,000 strong demobilized M-19 were confident that they would do well with voters.

Pizarro’s untimely death at the hands of hired assassins from the Medellín Cartel almost vanquished the dreams of his followers, the newly-formed AD/M-19 (Alianza Democrática M-19) political party, and was seen as a severe blow to the long-term aspirations of peace for millions of anxious Colombians, who had already witnessed the killing of two other presidential candidates since August 1989: the Liberal Party’s official candidate Luis Carlos Galán and the Unión Patrótica’s Bernardo Jaramillo.

Until Pizarro’s death in a Bogotá clinic, Navarro’s role in Colombian politics seemed relegated to being the M-19’s discerning peace negotiator. But on the same evening of Pizarro’s passing, he made his way to the Presidential Palace to address the nation on the official television and radio channel of the executive.

Without any pre-approved text or conditions from President Barco, the ex guerrilla commander could say anything he wanted. Many believed the anger over Pizarro’s death would be so overwhelming that Navarro Wolff would announce the M-19’s return to arms. Few – very few – suspected he would talk of peace and the importance of continuing the fight through democratic means. “I had my doubts if I should continue,” states Navarro Wolff of what went through his mind that fateful night. “In Colombia there was a tradition of killing those who made peace. Could it be that after killing Pizarro, they will kill us all?”

Navarro risked it all during three critical days, and a nation was grateful. Instead of riots breaking on Bogotá streets, Carlos Pizarro was granted a funeral “in peace” and the M-19’s spokesman launched as the Movement’s future leader. “Pizarro wasn’t killed for being a member of the M-19. He was killed for being a presidential candidate,” explains Navarro Wolff. “The Medellín Cartel was killing the presidential candidates.”

From a guerrilla in the mountains of Colombia to his first major test at the ballot box in the 1990 presidential elections, Navarro Wolff of the AD/M-19 received 800,000 votes -12.48 percent of the total electorate. “It was a campaign of 45 days and run from my house,” recalls Navarro Wolff of the fear and danger all candidates faced.

More than trying to clinch the highest office in the land, the elections proved that a group which destroyed their weapons could find space in Colombia’s political life, and be active in the Constituent Assembly of 1991 (Asamblea Nacional Constituyente) which set out to create a new constitution. “It was the biggest responsibility I have ever had,” recalls Navarro Wolff. “It was a very profound institutional change for the country. We came from a society governed by an establishment, a bipartisanship rooted in clientelism and a political framework which was hyper-Presidential.”

As an active player in opening the floodgates for democratic change through the Assembly, the far-reaching accords of President César Gaviria weren’t “implemented in their totality by future governments,” claims Navarro Wolff. Despite trimming the powers of the presidency and allowing new political forces to compete with equality, “the FARC continued to think they could win and unwinnable war. The Constitution invalidated the armed conflict,” affirms this statesman.

Antonio Navarro Wolff was introduced to “ghastly politics” at an early age, after his father, a staunch Liberal, dragged him into the campaign of the man who would become President from 1966-1970, Carlos Lleras Restrepo. “I didn’t want to be there,” recalls Navarro “I didn’t want to be part of that kind of society.” With the accusations of electoral fraud in the following elections on the 19th of April 1970 – and which handed executive powers to Conservative Misael Pastrana Borrero – the Movement 19th of April (M-19) was founded. Navarro joined their ranks in 1974 and rose to become the guerrilla’s second highest commander. “I thought it was a brilliant idea that there be a nationalist movement. One that didn’t depend on Havana or China. But a truly Colombian one.”

As the M-19 grew, other guerrilla organizations followed suit, gaining momentum; by the early 1980s, the country could claim six rural insurgencies, including the oldest one in the Americas, the Revolutionary Armed Forces of Colombia (FARC).

With the militancy in the countryside, it became apparent to Navarro Wolff that “we would never win.” In 1985, after an approach to explore the possibility of a peace with the government of Belisario Betancur, Navarro narrowly escaped an attack on his life when a grenade thrown into a café in Cali exploded causing severe injuries to his face and body. “It was a process which cost me my leg,” recalls Navarro Wolff. “We wanted to work on the idea of peace, but neither side, really wanted peace.”

While the militant recovered in Cuba, and received a prosthetic, the M-19 stormed the Palace of Justice. The assault turned into a massacre which discredited the guerrilla movement and put on trial the Armed Forces for the way they executed the rescue of magistrates. It remains one of the most violent and unresolved episodes of recent Colombian history. Times were desperate. Colombia’s institutions faced an all out war on many fronts, one of which was led by the Medellín Cartel looking to make alliances. For Navarro Wolff, the attempted infiltration of drug cartels in nationalist, left- wing organizations such as the M-19 revealed the need for a negotiated peace, years later.

Having suffered terror at close range, Navarro Wolff is critical of the FARC and their “over-dimensioned image of themselves.” As the oldest guerrilla force in the hemisphere they have “stayed” there, despite his conciliatory endorsement of the current peace talks in Havana, Cuba. “They don’t understand how the country is. They have been in the mountains too long.”

For Navarro, the FARC are a fighting force out of touch with the world. Relying on drug trafficking as a means of financing their cause, it has given them independence where other guerrillas have relied on external help. “When the Berlin Wall came down and the Soviet Union transformed, Cuba entered a “Special period” and ran out of money,” states Navarro. “Colombia’s guerrillas have never depended on anyone from the outside. They are autonomous, and illicit crops give the FARC its financial autonomy. This, in turn, has made them take longer in understanding global realities.”

Navarro believes that a political defeat of the FARC in Havana during these rounds of talks will have “more military consequences” than the last time they sat down with the government in the Cagúan. For this experienced peace negotiator, the Colombian conflict can only intensify unless there is a more concerted agenda dealing with social realities on the table. “The issue isn’t the financing of the guerrillas through drugs or illegal mining. If there is going to be a peace, there has to be something that I don’t see designed right now – the ‘integrated presence of the state’ in marginalized regions of the country.”

Mentioning the Catatumbo canyon, the Pacific coast, eastern Antioquia with its illegal mines, Navarro Wolff claims that in the eventuality that the country deals with a demobilized FARC, they have to form part of the nation’s security forces within the framework of a post- conflict society.

Navarro believes that there is less support for the current talks from the “establishment” than when the M-19 sat down at the table in Santo Domingo, Tolima. And unlike other processes in the country – starting with the War of 1000 Days to other peace deals in the 1990s – this time there isn’t a consensus. Opinions are divided. “There are those who want to impose conditions which don’t allow for negotiation.”

At the heart of the current negotiations is the contentious issue of demobilized militants being allowed a future in politics, and the judiciary process by which – if any – they could be tried for crimes committed.

“Political participation is tied to finding legal solutions,” asserts Navarro. “The rule of thumb, rather than the exception in a negotiated peace, is that one should be allowed to participate in politics.”

After his important contributions to the new Colombian charter, President Gaviria offered Navarro Wolff a Cabinet post as Minister of Health. Under his mandate, millions of Colombians benefitted from far-reaching reforms to the country’s health system. In 1994, Navarro Wolff ran again for President, but was defeated in the first round by candidates Ernesto Samper and Andrés Pastrana.

Seeing a future in local politics, Navarro Wolff returned to his birthplace, Pasto. He ran for Mayor in 1995, and won with a resounding majority. His leadership at a local government level has been praised for its inclusive social policies and honest administration of funds. In 1998, Navarro returned to the capital and was voted in as a Representative of the Chamber. Four years later, he received the second highest number of votes becoming Senator of the Republic. With the difficult security conditions in Nariño department, Navarro Wolff saw it his duty to return to the region and was elected Governor. A post he held from 2008 to 2011.

Although Navarro Wolff hasn’t given up on the possibility of running again for the country’s highest office, his focus now is on finding a “third way” with the support of Progresistas (the movement behind the questionable administration of Bogotá’s mayor Gustavo Petro) as well as, alternative groups such the Green Party.

Up against a possible Juan Manuel Santos re-election and defending the mandate of Petro, Navarro Wolff eyes the future with optimism. From his early years as a student of sanitation engineering in the Universidad del Valle and earning a Specialization in Environmental Engineering from Loughborough University (U.K.), Navarro remains connected to the real issues concerning the welfare state. He has fought hard for democracy and is living proof that peace has a fighting chance in Colombia. 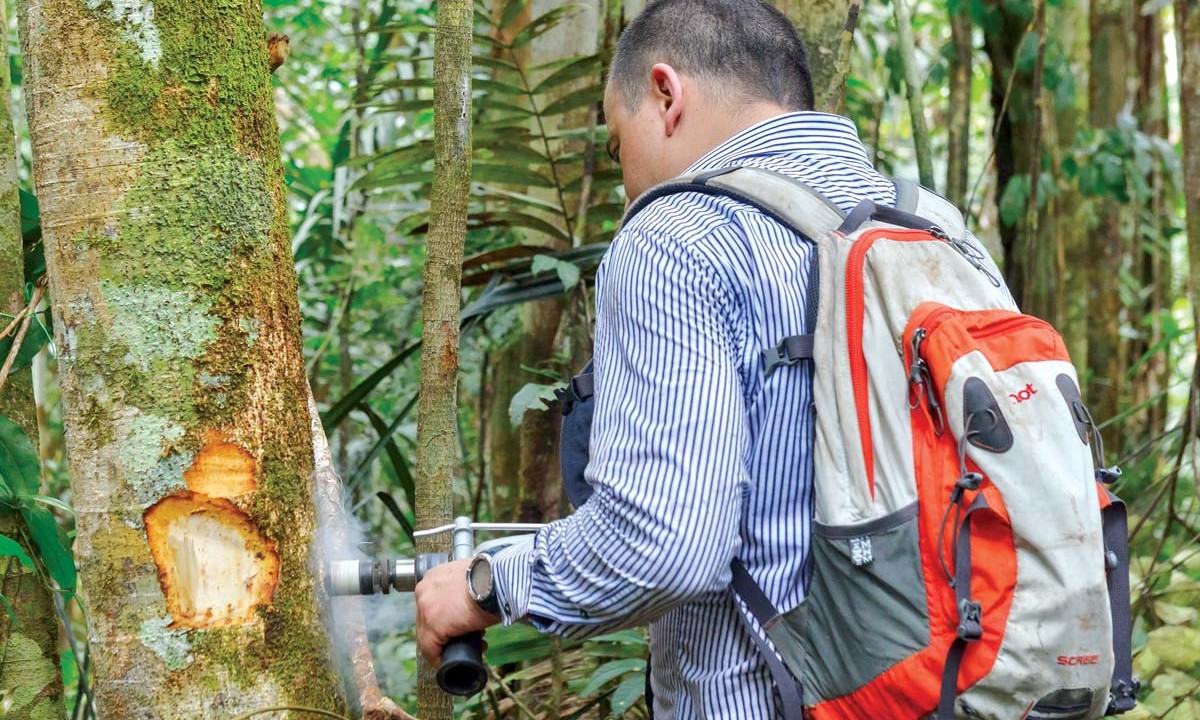 One tree at a time, Colombia research shifts climate focus