There are no windmills in the middle Magdalena. But when Luis rides “Alfa” through the high grasses of his native territory, he appears quixotic, steering his donkey towards the horizon and followed by another four-legged companion “Beto.”

When putting the names of two of his donkeys together, Alfa-Beto, you are introduced to the literary quest of Mr. Soriano Bohorquez, a primary school teacher from Nueva Granada – a remote township nestled in the Magdalena department – who back in 1990 started a “donkey library” in order to bring school texts and novels to rural children who otherwise would never have access to reading, let alone a library.

With rampant illiteracy in the region, Luis’ mobile library began on a whim, when visiting families scattered across some 15 villages and witnessing that there was a lack of books in order for both young and old to read. “I saw a necessity that many children who lived on farms, those between 12 and 16 years of age, were not at the level of literacy that came with their age,” states Luis. “I wanted to help them to grow intellectually, in their minds.”

Even though he didn’t set out to dream up a “donkey library,” the idea evolved naturally out of dedication and circumstance. The “little dwarf” as he calls his literary voyage, was his tool to help children get hold of physical books; and for them to be able to ask him questions on homework on a wide range of subject matter they were struggling with. As he went about his weekend chores riding his only means of transport back then, a donkey, he became a wandering Wikipedia of sorts.

He began with 70 books he found in street markets and bazaars along the coast; among them dictionaries, classic novels, and childrens’ fiction and school texts. The original collection remains suspended from a saddle in a boxed wooden frame and which acts as a “walk up” concept for his rural bibliophiles.

All book lending from the ‘Biblioburro’ is free – and in the words of Luis – “they are always returned by the villagers. The locals influenced by the ‘Biblioburro’ really appreciate the power of words,” states this literary ambassador. Luis lives off a state teacher’s salary of US$350 a month, and his donkeys eat grass “for free.”

Many of the incoming crates of books which have expanded his library to a current 4,800 were donated by writers of Bogotá’s literary elite. Radio broadcaster and revered journalist Juan Gossaín, on hearing of the Biblioburro’s venture several years ago opened up his airwaves to Luis Soriano, asking for book donations from across Colombia, and which were shipped off to the village of Nueva Granada.

When “Beto” joins “Alfa” in doing the book rounds ritual, Luis is able to haul some 200 books under an unfor- giving sun and striding through fields which not long ago were a battleground between left-wing guerillas and paramilitary death squads. Luis has always made his presence known to the villagers carting the library’s ensign “BIBLIOBURRO” in bold blue letters under his arm, even during the most difficult of times.

During his very first rounds, more than a decade ago, the teacher selected an eclectic assortment of books which ranged from “Anaconda” by Uruguayan writer Horacio Quiroga, the Dictionary of the Royal Academy of the Spanish Language and picture albums from Time-Life.

With 10 legs, Luis, age 42, can cover a radius of 20 kilometers in one day, delivering books to some 600 families who themselves would have to ride hours horseback in order to reach the nearest school or library. Mr. Soriano has spent close to 4,000 hours riding his donkeys and which have grown in number over the years to 12. Luis resides with his wife and three children in a small house where books can be seen stacked along four walls and reaching towards the ceiling.

As the most literate member of the community La Gloria, Luis and his fleet of donkeys, have often had to trundle into the villages beyond the known “radius” if there is a special request from a certain community. Some of the villages beyond the known world of the ‘Biblioburro’ make up Colombia’s most famous literary landscape: ‘Macondo,’ home to Aracataca, and birthplace of Nobel prize-winning author Gabriel García Márquez (1927-2014). García Márquez’s timeless epic ‘One Hundred Years of Solitude’ is an obligatory book on Alfa’s shoulder. Luis jokingly remarks that ‘Biblioburro’ exists at the belly of the fabled ‘Macondo.’

During the height of paramilitary violence in 2006, the residents of Nueva Granada were immersed in fear. As bandits went from village to village intimidating locals, many sought refuge in the marshlands. On many occasions, Luis took his family into the hills to live at “the mercy of the moon.”

Even though the fields of Nueva Granada were never mined by those who took up arms, Luis did loose a leg as a result of a traffic accident. He reflects pragmatically on the years of violence which beset his region: “The bullet enters everyone.”

But neither the violence, nor an impediment, prevented the roving library from fulfilling its weekly rounds. Instead, Luis set his sights on expanding his collection and circle of influence, looking towards the future with the objective to create one of the largest cultural centers the Magdalena region has ever known.

After 14 years, ‘Biblioburro’ has extended its reputation far beyond Colombia even though its owner has never ventured beyond his native land. Mr. Soriano has been profiled on CNN, PBS, in the pages of The New York Times and even Brazilian novelist Paulo Coelho praised Soriano’s odyssey in an extensive essay. And the acclaimed childrens’ author and illustrator Jeanette Winter published in 2010 a poignant picture book entitled Biblioburro: A True Story from Colombia. Yet ironically, Luis Soriano, was only able to attend this month’s International Book Fair in Bogotá thanks to a paid-for plane ticket from a friend.

While crusading against illiteracy in a war-weary hinterland, Soriano is keen to expand his meager English-language book collection. Understanding the importance of bilingualism in a country which increasingly is connected to the outside world through digital and print, he feels passionately that rural children should have greater access to words written in the world’s most widely-spoken language.

As we talk in a concrete jungle far from the sun splashed plains of the Magdalena, Soriano also extends an open invitation to English teachers who want to break away from the monotony of the big city and donate time teaching English in a rural setting. “I can assure any English teacher who wants to teach in La Gloria that the food will be organic.” The town’s residents have also offered to open their homes for free.

The story of Luis and his donkey library is an inspiration to a nation which struggles under the burden of education and reconciliation. What this enterprising man has shown the world is that it is possible to change not just a community, but even a country, one book and trot at a time. 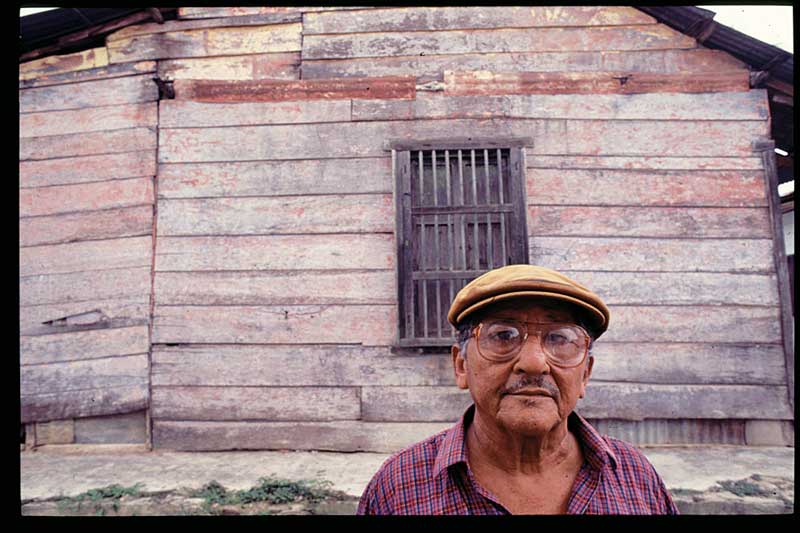 The ‘Macondo’ that lives on