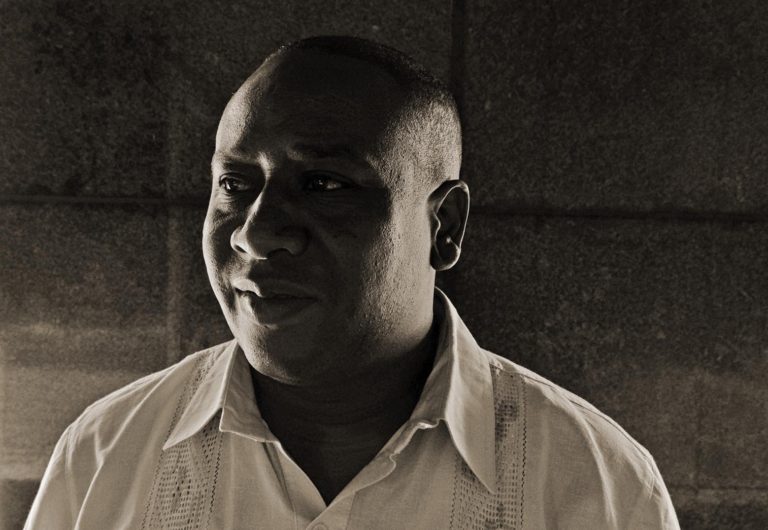 “I remember the bodies floating down the Atrato River,” recalls Leyner Palacios Asprilla of the encroaching war in the countryside between the right-wing paramilitary death squads and the Revolutionary Armed Forces of Colombia (FARC) guerrilla.

During the early years of this millennium, Colombia’s third-largest waterway became the westernmost front in an internal conflict that every year claimed the lives of some 11,000 civilians, and forcibly displaced entire communities seeking refuge in the country’s large cities.

The world’s oldest internal conflict appeared to have no end. For those who worked their plots of land or shed the Atrato’s murky waters, being stopped by the heavily armed members of the United Self Defense Forces of Colombia (AUC), or a FARC front was a daily gamble between life and death.

With few regions of this country spared the rising body count, and small towns barricaded behind sand bags, the FARC guerrilla launched what would be the most barbaric attack against innocent civilians in recent Colombian history. Armed with improvised pipe bombs, the FARC attacked the hamlet of Bojayá on May 2, 2002.

Bojayá was home to less than a thousand inhabitants, mostly poor subsistence farmers of Afro-Colombian descent. Caught in the middle of a land grab between the AUC, under command of Freddy Rendón alias “El Alemán,” and FARC’s Elmer Cárdenas front, the people of Bojayá felt in full force the determination of these two enemies to halt each other’s advance. FARC’s top eld marshal, alias “Iván Márquez” ordered 2,000 guerrillas to move in on the impoverished community. Even though locals heard the rattle of gun fire in their elds nearby days before the attack, no one imagined the carnage that would be unleashed when that evening a hail of bullets rained down on the town. As fighting intensied, women ran with their children for cover to the local church. Locked inside and huddled under wooden pews, the battle raged on. Then, a terrible explosion: a FARC pipe bomb striked the church, reducing it to rubble.

The death toll of the Bojayá massacre stands at 119, with many still unaccounted for 15-years later, despite ongoing exhumations and forensic analysis on human remains. The loss of life inside the church included 38 infants and children. “What happened here was genocide,” remarked the then President Andrés Pastrana Arango. When the attack finally ended 28-hours later, Leyner Palacios, then a young man, emerged as other few survivors did, exhausted, forever broken, and witness to the unimaginable and horrendous realization that 32 of his close relatives, including his parents and three brothers, were among the dead.

The massacre of Bojayá became a clarion call to action, and turning point in this country’s internal conflict. Under the two-term presidency of Alvaro Uribe, the paramilitaries demobilized and disarmed. But, only when FARC opened formal peace talks with the Colombian government in Havana, Cuba, back in 2012, did the end to a half-century long conflict appear reachable.

As the guerrilla negotiated their six-point agenda, the issue of reparations for victims had to include recognition of the atrocities committed, as well as the promise to search for thousands of missing people and return their remains to loved ones.

Leyner Palacios had no experience dealing with senior government officials and non-governmental organizations during the aftermath of the Bojayá tragedy. But, grieving the personal loss “of his brothers and compadres”, the respected community member became a natural spokesperson for the many victims, as he felt it imperative to keep their memory alive, and a constant reminder to Colombians that what occurred inside that church can never be repeated. “The church is a place of peace, a reference to all generations that war is futile,” he says.

Mr.Palacios was nominated last month to the prestigious Global Pluralism Award for his dedication to human rights and witness to the horrors of the Colombian conflict. The award, which will be handed-out September by the Ottawa-based Global Center for Pluralism, is a hard-earned recognition for the leader of an Afro-Colombian community that has come to symbolize the economic abandonment of a natural resource-rich territory, inhabited by a mostly Afro-Colombian population.

“This nomination is a recognition to all the communities along the Atrato who are trying to rebuild their social fabric after so much blood-letting,” remarks Palacios.

Founded in 2007 by the Aga Khan as a think-tank to promote diversity through understanding, and promote pluralism in a world increasingly beset by intolerance and fear, the Global Centre for Pluralism (GCP) is a charitable organization with a long-standing relationship with the government of Canada, and its interest to spread democratic values in countries emerging from their internal conflicts.

As the organization celebrates its first decade, Leyner joins nine other advocates from human rights groups nominated for this prestigious award. But it is not the first time the community activist is being recognized on the world’s stage. When in 2016, President Juan Manuel Santos traveled to Oslo to receive the Nobel Peace Prize, this son of Bojayea was among those invited to the official ceremony. “We have a sense of great peace and lots of reconciliation to work towards. It will be a tough, but beautiful time,” said Leyner in Oslo. Confronting the past has been “a long journey” for a man whose main reference of a world beyond violence was the Atrato River. Recently, during a ceremony at the Canadian Embassy in Bogotá to announce the CGP nomination, Leyner recalls how he started the Committee for the Rights of Victims of Bojayá, which led him to Havana, and to a chance encounter with the very men who orchestrated the attack, including “Iván Márquez” – FARC’s chief peace negotiator. All of a sudden these “very tough guys” approached Palacios saying: “We want to ask for forgiveness,” he recalls.

Leyner was stunned at the candid request, telling FARC’s senior commanders that the decision needed to be presented formally to the community for approval. Upon his return, locals assembled at the church, held a solemn ceremony, and began to study the guerrilla’s act of contrition.

“We could either live in the past, or set an example to future generations,” recalls the father of three. “If we all perpetuate hate, vengeance and retaliation, we are never going to become a country that offers better opportunity for our children,” said Leyner.

The town voted unanimously to accept the pardon, but under a condition that it not be used as a media event or for political gain at the peace negotiating table. “We wanted to respect the privacy of our grief,” says Leyner.

But, half a nation away, and a world removed from the theatre where the ceremony was held, the residents of Bojayá were hardly festive, surrounded by the visible symbols of destruction.

When Colombians first received news bulletins of the attack on Bojayá, pictures were few and far between.

As dawn broke May 3, and survivors went out in search of loved ones, the village’s Christ that hung above the altar was spotted in a corner, arms and legs blown-off. Pictures of the smashed torso made the front page and became the haunting image logged deep in the national consciousness.

It would take 15 years for Bojayá’s Redeemer to regain his rightful place. On September 29 – days before voters rejected the original accord in a plebiscite – Colombia’s High Peace Commissioner Sergio Jaramillo and FARC’s “Iván Márquez” visited the site of the massacre. In a private gathering of locals, and Leyner seated between the protagonists of Colombia’s fragile peace, the former commander of the Elmer Cárdenas front made reference to the past. “On the banks of this immense river, and in front of these precious forgotten people […] we ask that you forgive us, and grant us spiritual relief by allowing us to continue alongside you, on the road to reconciliation.”

Márquéz’s words were not met by cheers, but by a moment of silent introspection. In the shadow of a renovated Christ, Palacios had opened a path for forgiveness, and one that winds its way from the battered church, to the Atrato, and beyond.