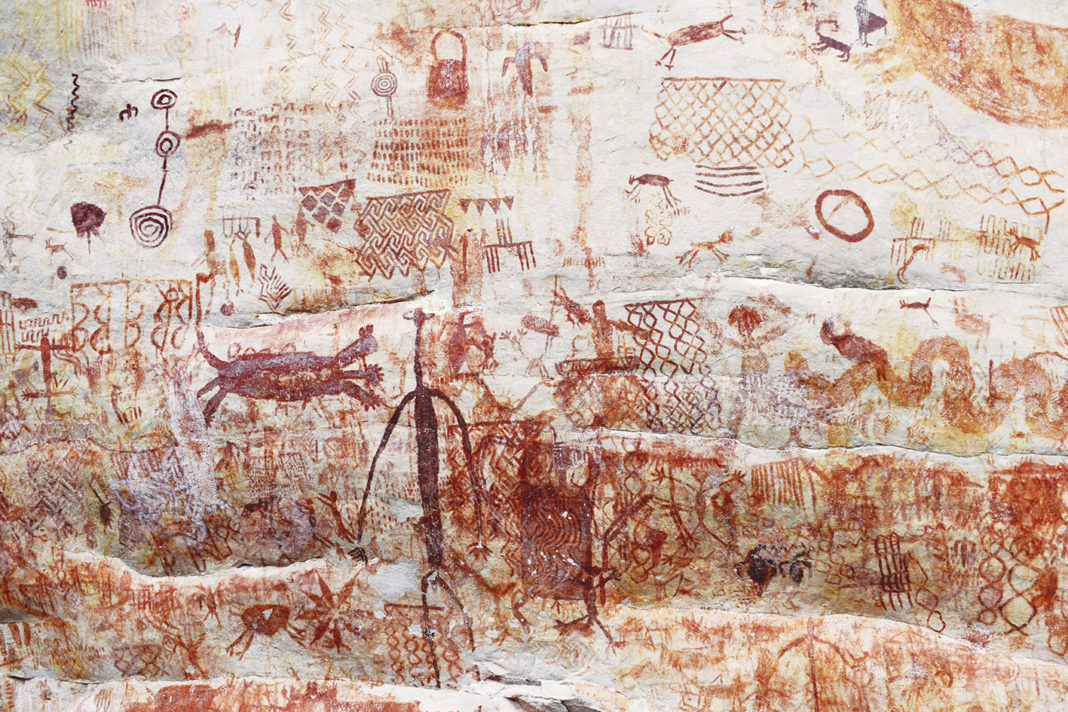 A craggy rock face that skirts the rural township of Nuevo Tolima in the department of Guaviare is home to more ancient art than can be found in the most complete museum in the world.

Abandoned for millennia by those who painted their universe and almost impossible to see – as for decades the Colombian Army waged war with FARC in these sun-washed foothills – the pictograms sprawled across Serranía La Lindosa are being studied by anthropologists as a rare window on an Amazonian people that inhabited this region as early as 10,000 B.C. The fiery red drawings of armadillos, deer, boas and other endemic species could be considered among the oldest in the world, pre-dating the cave drawings in Lascaux, France.

Unlike the Neanderthals in southern France, a prehistoric site that since its discovery in 1940 receives busloads of tourists, La Lindosa’s rock art is just there – ready to be viewed if after paying a local farmer $2,000 pesos, one can muster up enough courage to cross a field populated by nervous bulls, and hike up a steep ravine. Then, after a few slippery ladders, and reaching for fluorescent green vines (that could be mistaken for snakes) one steps on to a narrow ledge with a panoramic view of the Eastern plains engulfed by the sheer magnificence of La Lindosa.

Even though the human footprint is almost negligible, translated in several hundred tourists, mainly school outings or locals discovering their post-conflict backyard, trophy vandals have begun to chip at La Lindosa’s achiote rockface, while others have scribbled hearts and football club logos over several of the animals.

The urgency to protect La Lindosa, Cerro Azul and six other nearby sites in Guaviare from vandalism, as well as preserve for future generations what may be considered the most complete visual collection of Amazonian creatures, resulted in the Colombian Institute of Anthropology and History (ICANH) declaring the Serranía La Lindosa a protected Archaeological Area of Colombia (AAP).

This designation covers 893 hectares in a region that is considered the natural gateway to the country’s largest national park – PNN Chiribiquete – closed to visitors given its immense natural habitat for endangered species, and a fractured landscape that also houses walls-upon-walls of pictograms.

At the request of the department and National University that has been leading the field research of Guaviare’s rock art, ICANH decided to add the site to its other protected areas, that include Piedras del Tunjo, in Facatativa; El Infiernito, Boyacá; Teyuna-Lost City, Magdalena; San Agustín and Isnos, Huila, among others.

With La Lindosa, Colombia now has 21 protected archaeological areas, and a very necessary decision to save a masterpiece that seems to talk to viewers from behind a veil of time, from forever being silenced by human ignorance and mischief.

Colombia: A nation of percussionists