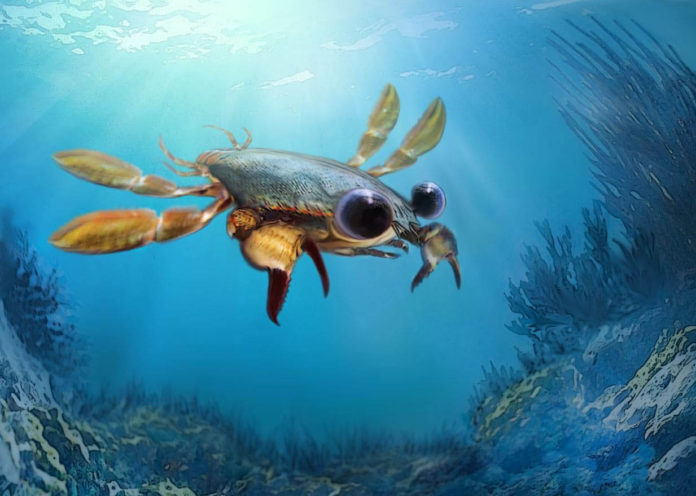 Crab evolution is the trending topic among scientists after a strange discovery was revealed last month in the academic journal Science Advances, and with a very Colombian Crustacean, found at a fossil site in central Boyacá, and that could date back 95 million years.

After confirming his findings with a team of international experts, the Colombian paleontologist Javier Luque at Yale University announced that the Callichimaera perplexa is possibly the earliest example of a swimming arthropod since sea scorpions went extinct more than 250 million years ago. “The Callichimaera perplexa is so unique and strange that it can be considered the platypus of the crab world,” said Luque to Science Advances.

“It hints at how novel forms evolve and become so disparate through time. Usually, we think of crabs as big animals with broad carapaces, strong claws, small eyes in long eyestalks, and a small tail tucked under the body. Well, Callichimaera defies all of these ‘crabby’ features and forces a re-think of our definition of what makes a crab a crab.” The Callichimaera’s full name translates into “perplexing beautiful chimera.”

The paleontologist also highlighted the importance of a discovery in the tropics, where many fossil beds are covered by thick vegetation, making access to exposed rock faces a challenge. Luque discovered the first fossil of the C. perplexa in 2005 while hunting for fossils as an undergraduate student. Other discoveries in Wyoming and Morocco confirmed that the bizarre sea creature could adapt to different environments.

To understand the evolutionary tree of this crab with bubble eyes, large claws and paddles for legs involved the University of Alberta, Kent State University, University of Montreal, Smithsonian Tropical Research Institute in Panama, Canadian Parks and Wilderness Society, among others.

Fernando Urbina and the Spanish Conquest in rock art