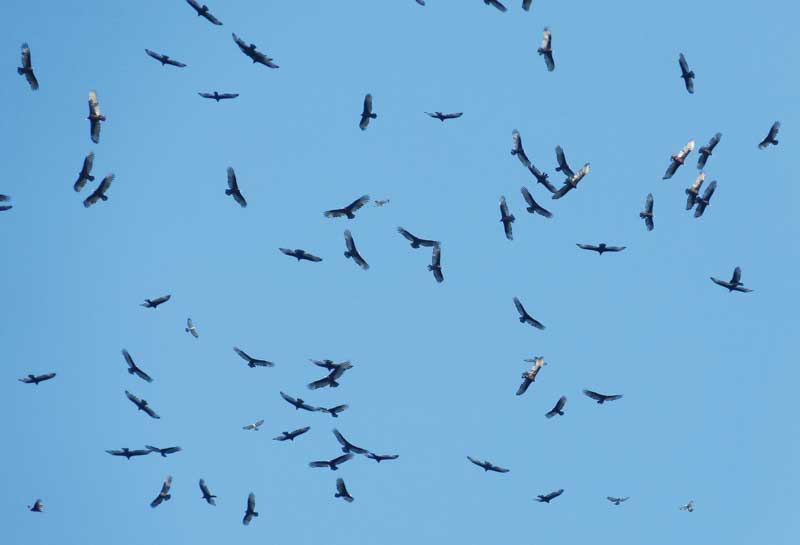 It’s 11 a.m on the border between Colombia and Panama, the heat is rising, the humidity feels close to 100% but standing on an exposed ridge are two silhouetted figures, starkly out-lined by the intense Caribbean light.

Armed with binoculars they repeatedly scan a distant ridgeline, waiting for one of nature’s great spectacles. Around 11.30, one of the observers is alerted by a rapidly growing spiral of dark forms materializing above the ridgeline. At first the spiraling mass could be mistaken for smoke rising or a cloud of insects, but as they climb, circling the whole time, they begin to take on the distinctive form of birds, hundreds of birds. As they gain height, the first individuals peel away from the top of the spiral and make a beeline for the border, wings back and descending, they rapidly approach the observers and their size and hawk- shaped profile become apparent. Soon more spirals are appearing, as thousands of hawks and larger vultures take advantage of rising air currents, before steaming over the heads of the waiting observers in magical formations. As the morning wears on, the notebooks and heads of the observers fill with numbers, as over 20,000 birds of prey are logged entering Colombia.

Despite the fact that around five million migratory raptors pass through or wait out the Northern Hemisphere winter in Colombia, the remarkable spectacle that is their migration is only known to a handful of dedicated birdwatchers. Further north, the same spectacle attracts over 20,000 visitors a year in Veracruz, Mexico, and hundreds of hawk “watchsites” exist throughout North America. This is beginning to change in Colombia, thanks to a dedicated group of scientists from the NGO SELVA, who have been documenting the migration of this enigmatic group of birds in Sapzurro, in the extreme north-east corner of the Chocó department since 2011. In an article published this year, they showed how over half a million raptors pass over Sapzurro each year, placing it within the top five watchsites in the Americas. At the same time, they have organized a celebration of migrating raptors in the village, with the primary school children as the main protagonists, as well as promoting the migration of raptors as a tourist attraction through guide training courses with the help of the Reserva Tacarcuna, local eco-tourism outfit, Ecohuellas, and the Consejos Comunitarios of the Afro-Colombian communities. These activities were complemented through the recent publication of guides to the region’s wildlife and birdwatching sites.

Sapzurro is not alone in witnessing this phenomenon, indeed villages all along the coast of the Darién region and on the shores of the Gulf of Urabá in Antioquia, have come to read the seasons by the passing of the “Lauras”, as they are fondly known. The Lauras or Turkey Vultures, are the most numerous and also the largest of the seven species of raptors that travel through and to Colombia, and for many, perhaps the most striking to observe. With around three million passing through the Darién twice a year, these large, black vultures, with two-toned wings and a contrasting red head, regularly migrate in groups of 500 to 1000, and the sight of a whirling, spiraling group or the seemingly effortless and serene progression of a squadron of birds heading south, is a site to behold, even for the most seasoned wildlife enthusiast.

Witnessing the migration of raptors is all about timing. During what is termed autumn or fall migration, the best time to visit Sapzurro or other tourist destinations like Capurganá or San Francisco, is between the 20th October and 15th November. In spring, large numbers of birds congregate near to Necocli, north-west Antioquia, between late February and early March, and are regularly seen along the shores of the Gulf of Urabá and the Gulf of Darién.

Most migration takes place between 10 am and 4 pm but at times large groups pass the night in Sapzurro, while in Bocas del Atrato, near Turbo, Antioquia, thousands of birds spend the night in mangroves.

A visit to this region is not just about the migration of raptors, as no trip would be complete without spending some time on the stunning beaches, snorkeling the coral fringed bays, exploring the labyrinths of mangroves, and taking a hike in the forest in search of monkeys, poison-arrow frogs, and a plethora of colorful tropical birds. 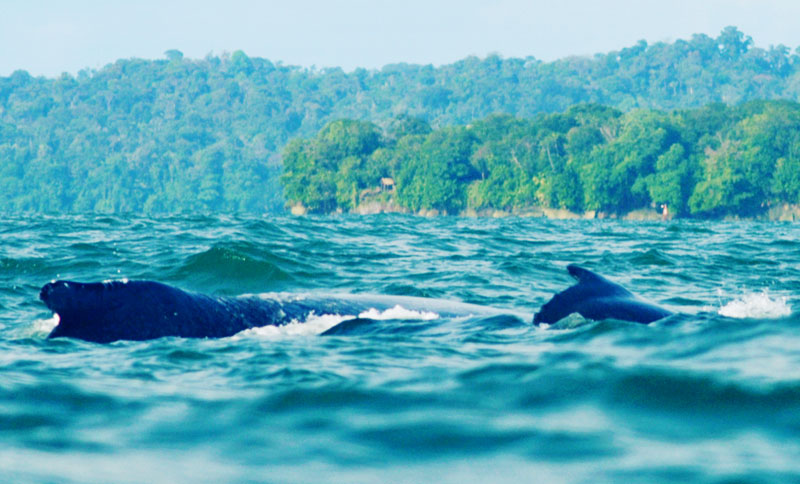