The butterflies ended their journey, almost a half a century later, in an undulating tribute to the genius whose pen immortalized them with the ascension of Remedios La Bella one morning in ‘Macondo,’ the mythical epicentre of Gabriel García Márquez’s ‘One Hundred Years of Solitude.’

They arrived in the ‘City of Palaces’ from the ‘City of the Moon’ as part of a lofty confabulation among friends, and the complicity of a dozen participants in the Nobel’s final tribute.

It began with the request of the Mexican intelectual Rosalba Garza, a close friend of the García-Barchas, and one of the 20 members of the so-called ‘Las Gabas,’-  the “second circle of affection” of the famous couple.

On the Saturday after García Márquez’s passing, Garza called close friend Andrés Jaramillo, owner of Andrés Carne de Res restaurant, and creator of the paper miniatures, and asked him if he would help her get these emblematic cut-outs to Mexico.

Thanks to the inventiveness of Jaramillo and a series of encounters throughout the years with García Márquez, the butterflies managed to transcend the threshold of words; and become the physical manifestation of the Nobel’s imagination. They have also become a Colombian icon.

“There’s no way to patent them, but I’ve told many that ‘this invention is mine,’ inspired by the yellow butterflies of García Márquez,” stated Jaramillo. Besides the technique involved in stencil cutting, he also devised the whim of throwing them so they can fly at the mercy of drafts or wind. Each bundle contains 100, and weighs 35 grams at a cost of 250 pesos.

An avid reader of the works of the Nobel and all that defines Colombian culture, Jaramillo harnessed enough courage to overcome his shyness in order to greet García Márquez, one sweltering afternoon, at the Hilton Hotel in Cartagena.

Jaramillo had noticed – from afar – a moustached man discretely eyeing the derrière of his bikini-clad wife. Recognizing the owner of the moustache, Jaramillo overcame this oversight, as he found himself enticed by one of his favourite writers.

After a shot of fire water, the restaurateur found courage to shake the Nobel’s hand and bestow him with another of his ingenuities: The ‘Medal of the Happy Heart’, awarded to the “cool” people he found along the way.

Although Gabo insisted he had visited the restaurant, Jaramillo thought the contrary, and extended an open invitation. He recalls that García Márquez had the politeness to stand up from his chair, bow his head and thank him solemnly for the distinction.

Years later, García Márquez visited Jaramillo. “Some friends took him to Andrés. They called me, and I decorated the dining room with butterflies,” he recalls. It was the first time the paper Lepidoptera would invade every nook and corner of the restaurant, and began weaving its way into Andrés’ mind.

The imaginary transformation of the yellow creatures happened years later when Jaramillo was witness to an explosion of confetti by fans of Boca Juniors at the ‘La Bombonera’ stadium in Buenos Aires, Argentina.

“Millions of tiny colored papers filled the air, and then, with the memories of that moment, I decided to do something similar with the butterflies of García Márquez, in Chía, 12 years ago.”

From that day onwards, the paper butterflies evolved into a hallmark of the Andrés Carne de Res experience. They even took flight at the celebration of the Nobel’s 80th birthday in Cartagena and the re-edition ceremony of ‘One Hundred Years of Solitude’ in 2007.

Jaramillo had not sent the butterflies on that occasion, but, from that moment onwards, he made sure that the novelist would always have enough bundles of paper cut-outs in his studio, thanks to their mutual friends Rosalba Garza and her husband, Rodrigo Castaño.

A few days after that ceremony in Cartagena, Castaño surprised Jaramillo with a copy of the commemorative edition of the timeless classic, in which, García Márquez had written in his own hand writing: “Andrés Carne de Res, donde se acuestan dos y amanecen tres. Un abrazote.” (Andres Carne de Res: Where two lay down, and three arise. A huge hug.)

The inscription was reproduced on decals and letterheads, and resurges as an imaginary and eternal epitaph every time the paper butterflies land on shoulders of those on the dance floor, becoming a symbol of Jaramillo’s restaurant.

On that Saturday after García Márquez’s death, when Rosalba Garza called Jaramillo to invite him to the tribute, she wittingly said to the entrepreneur that ‘Gabo’ was probably scheming a comeback.

She noted that a 7.5 magnitude earthquake had shaken Mexico the day before, and a powerful downpour had also blanketed the capital. She marked her words convincingly, unbeknownst that she would become the medium through which the writer would apparently say his last goodbyes.

Jaramillo sought out help for his winged envoys by appraoching Colombia’s First Lady, María Clemencia Rodríguez de Santos. She took it upon herself to pack the boxes, which housed more than 3,000 bundles of butterflies and to deliver them personally to Garza. She also set aside others for the planned memorial service at Bogotá’s Cathedral.

Time seemed to fly fast as the high level committee took off to Mexico with President Juan Manuel Santos and the First Lady in charge of the butterflies. While Mexican officials were going about their duties, and only a few hours before the ceremony at The Bellas Artes Palace, it seemed that the paper cut-outs would not reach their intended destination, as they hadn’t made their way up the red carpet.

Around 3 p.m, an aide from the Colombian delegation delivered the butterflies to Rosalba Garza. With help from the directives of the Palace, Garza was able to get four Venturi-type propelled pumps, mounted and loaded near the main entrance of the cultural space.

She kept a bundle of cut-outs for herself, and shared them with a few of the ‘Gabas’ who were present. Once the official ceremony was over, they coveted around the urn and blew away the butterflies as a final good bye. It became a prelude to the spectacular farewell flight that followed.

A total of 333,000 paper butterflies enveloped the Mexican sky. They reached a height of up to 20 meters. As they waltzed over the square, they began a fantastical journey which will be remembered in the collective memory for generations to come. 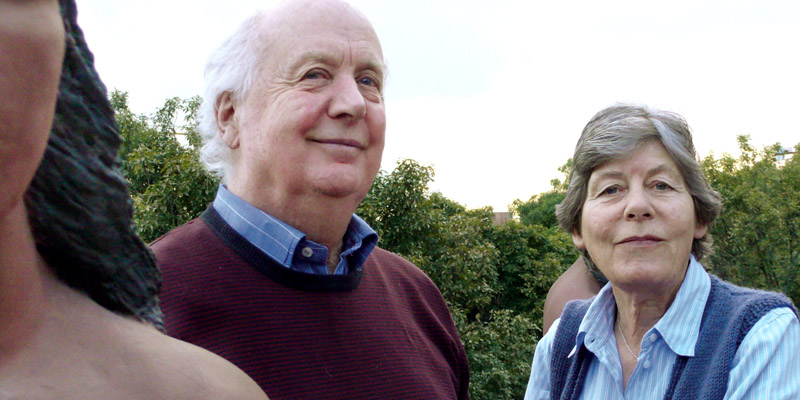