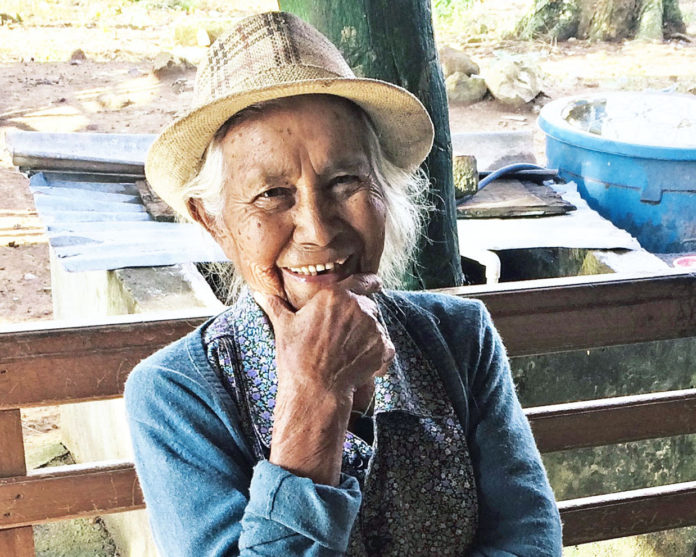 The early morning sun casts a golden hue over the arid hills of Santander as a motorbike meanders a gravel road. I am on my way to meet Ana Felisa Alquichire, the last direct descendant of the Guane indigenous tribe. At age 90, Doña Felisa, as she is fondly called, is more than just a memory of an ancient tribe. She is the keeper of ancestral knowledge, and has faithfully dedicated her life to preserving her ethnic group’s earthy tradition of handmade ceramics.

I approach her adobe house with fading white walls that support a red-tiled roof. Doña Felisa is sitting quietly on a wooden bench in the shadow of a tall Acacia tree that towers over the farm. She dons a tightly woven hat made from dried fibers of the fique plant, and her hands rest on a well-worn floral dress. As I come into view, her eyes light up and she smiles, greeting me in her thick Santandereano accent.

The Guane were a small tribe of highly advanced peoples who occupied a territory called Guanentá, in southern Santander, around the eighth century. They used sophisticated cultivation and irrigation methods, performed elaborate burial rituals, and were skilled artisans.

Many intricately designed cooking vessels made out of clay and fragments of cotton and dried fique textiles have been unearthed during excavations by archaeologists. Ancient pictographs still adorn cave walls throughout this mountainous department. Despite the loss of the Guane’s ancestral territory and traditions from the 17th-century onwards due to Spanish colonization, the usefulness of their craftsmanship was not tossed out. Instead, the Pre-Columbian clay-molding technique has been dutifully passed on, generation to generation, until reaching Doña Felisa.

Doña Felisa was born into a family of farmers in a rural county of Barichara called Butaregua – in the shadow of the same century-old family home she lives today. She was one of eight children, and her parents, Prudencio Alquichire and Gregoria Porras, lived by a strong work ethic. “We were taught to suffer and to work,” says Doña Felisa without a trace of regret. She recalls while her father toiled the land for tobacco, yucca, and corn, her mother was responsible for producing burnt earthenware for everyday use. In particular, tejas or roof tiles, plates to cook arepas, and vasijas or large pots used to cook dough and store fermented drinks such as corn chicha and sugarcane-infused guarapo.

It was Doña Felisa’s birthright to continue her family tradition. “I actually wanted to learn how to spin fique, but I wasn’t able to move the peddle,” she says laughing. So, from a young age, her mother introduced her to ceramic making. And after years of practice, her talent manifested itself, and she became an expert at creating earthenware that was as coarse as the landscape from which it originates.

“On Mondays, we would all walk to a faraway mine to collect the clay,” recalls Doña Felisa when explaining the process. “We would roll the clay into small balls and carry them back home in mochilas.” Exhausted after a day’s trek through the mountains, the family would then lay the balls of clay in the sun and, after cutting them into small pieces, place them in water. Burnt pulverized calcite stones were then added to prevent the ceramics from exploding later on during the burning stage.

The resulting thick, rubbery substance is difficult for amateurs to work with, but effortless for the magical hands of gifted ceramists such as Doña Felisa and her Pre-Columbian knowledge. After careful smoothening and left to dry under a scorching sun, the raw ceramics are ready for la quema – the burning. One of the reasons why this ceramic technique is so unique (and difficult) is that the clay artifacts are burnt in an open pit using cow dung and wood as fuel. Branches, leaves and stones are placed around the pit, covering every hole to ensure the objects are burnt evenly.

Aside from producing ceramics for their own use, the Alquichire family earned a living selling their wares in nearby towns. When Doña Felisa married José Joaquín Ortíz and became a mother to 11 children, she continued this tradition. “I worked very hard. I sold my pieces in Barichara, San Gil, Galán and Zapatoca. I raised my children with my work,” she says proudly. In her younger years, she recalls making two vasijas and three-dozen roof tiles a week.

When I ask whether she still makes ceramics, she replies, laughing: “If I were younger, do you think I would have time to talk to you? I am now very old. If I could work, I would.” After dedicating more than 70 years to this backbreaking work, her doctor has limited her movements to the kitchen.

Doña Felisa’s craftsmanship has been recognized. In 2009, the San Gil Guane Foundation with the support of former President Belisario Betancur honored her in Barichara. The conservative leader who governed Colombia from 1982 to 1984 praised the artisan as “a person of wonder, born a Guane and one of our icons throughout the region.” Doña Felisa also taught ceramic-making at the Fundación Taller de Oficios de Barichara, a craft work- shop founded in 2007 by Betancur’s wife, renowned sculptor and ceramist Dalita Navarro, who was one of Doña Felisa’s students.

The traditional clay pieces also caught the attention of leading restaurateurs Tomás Rueda, the eco-conscious chef of Tábula and Donostia, and Andrés Jaramillo of Andrés Carnes de Res fame. Both serve traditional Colombian fare on Doña Felisa’s rustic ceramics. Besides the practicality of the clay’s resistance to high temperatures and their contemporary appeal, Rueda and Jaramillo understand the importance of preserving Colombia’s culinary history beyond ingredients. “Gatronomy must represent values that are intangible,” claims Rueda. “The value of Doña Felisa is not only her pre-Hispanic technique, but preserving an esthetic that is inherently Colombian.”

Despite recognition of her work by fellow artisans and chefs, “everything has changed,” says Doña Felisa. At one time, there were 300 families dedicated to making ceramics, but the prevalence of aluminum and plastic kitchen utensils, as well as urban lifestyles have dramatically diminished the need for cooking with clay.

“In the past, we made a lot of chicha for an occasion, about 88 gallons. Now people simply prefer beer,” says Doña Felisa when explaining the reduction in the demand for her clay pots. Alexander Jiménez, a resident and local guide from Barichara, believes, “most of the handmade ceramics from Guane are now considered artisanal objects with no practical use. Tourists buy them as souvenirs. Purely for decorative purposes.”

Doña Felisa understands time is not on her side. “They say the work is going to end. Who knows if it will happen,” she remarks with a hint of sadness. “There is no one to do it because it is very hard.” None of her sisters have taken an interest in this longstanding tradition. Only one of her daughters, Bernarda, showed some interest. But, even though she learned the trade, she isn’t keen to mold clay. “It’s simply not profitable,” explains Felisa.

Even though there are four women in this community who know and practice the ancient method, the younger generation is not concerned with keeping the Guane ceramic tradition alive. From Doña Felisa’s perspective “youngsters sleep too much and aren’t capable of grinding corn to make arepas. They buy everything ready-made.”

With no artisans devoted to safeguarding this craft, the continuance of her Guane heritage is uncertain, and many fear that in time it could be on the brink of disappearing. What is certain, however, is that Doña Felisa represents a generation of Colombians who, despite major changes taking place, have firmly clung to their age-old traditions, which have given meaning to their lives and enrich the Pre-Columbian heritage that defines Colombians today.

“It’s important to show her legacy,” believes Rueda, “for she, represents elegance at a table. And ultimately, food unites us.”

So, the next time you pick up a handwoven mochila, intricately beaded necklace or burnt clay pot, take a moment to appreciate the hands that made them – hands that represent a lifetime of loyalty and devotion.