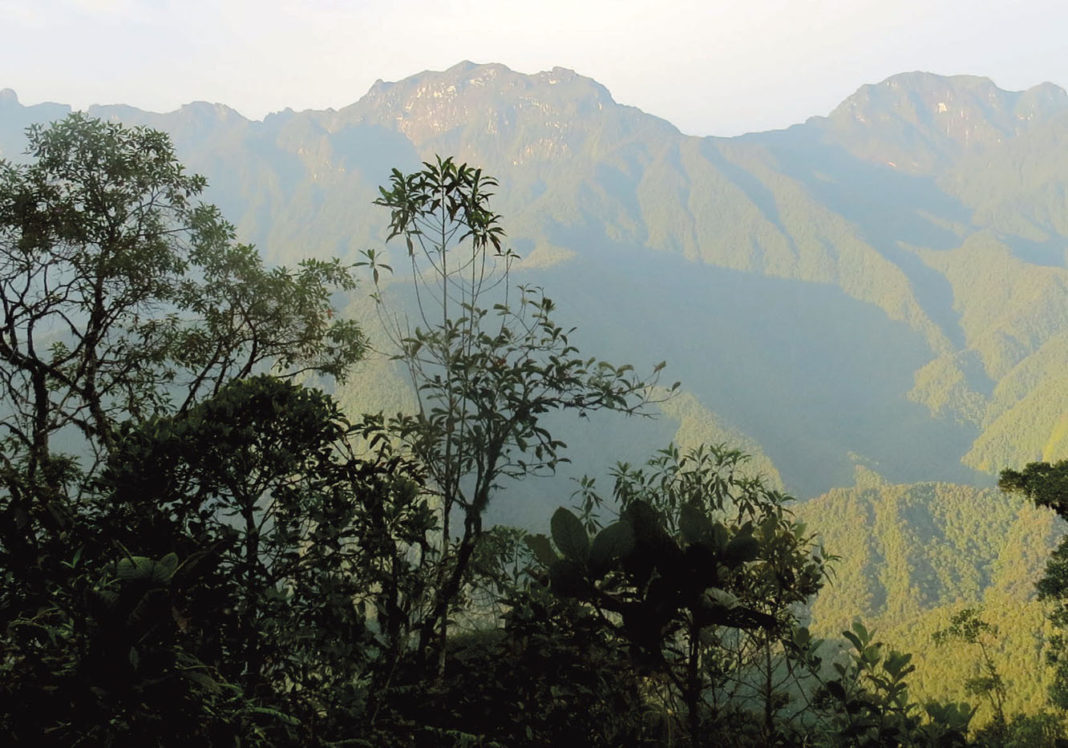 Forests can be intimidating, and literature has only reinforced the belief that behind every tree, a big bad wolf lurks. From Walt Disney to Tolkien, and the fairy tales of childhood, especially those of Jacob and Wilhelm Grimm, forests are depicted as foreboding places. Even one settler in the American West described his 16th century surroundings as “a dark and dismal place where all manner of wild beasts dash about uncooked.”

As the second most bio diverse nation on the planet, Colombia has few mythical beasts. The large canine that gobbles up Granny in Little Red Riding Hood would be the equivalent of an endangered San Lucas jaguar, and the fire spewing dragons of medieval mythology, our florescent Draco volans (flying lizards) of the Chocó rainforest.

But, fantastical creatures are deep rooted in the imagination of Colombians. Take the ancient cave dweller El Mohán, as one example. In Tolima, he is feared among fishermen for capsizing canoes and stealing the day’s catch. In his lair – besides rotting fish – are women snatched while doing laundry on the riverbank of the Magdalena. Part amphibian, part troglodyte, El Mohán is rumored to roam the dry forests of Caracolí, several kilometers north of Honda. If planning on buying a finca along the Honda-Guarinochito road, best invest in a washing machine.

While botanists and birdwatchers are afraid of falling under the spell of El Mohán, Madremonte (Mother Mountain) is a friendly moss-covered giant who inhabits the rainforests of Caquetá, Amazonas, and Guainia. With her Eve-like features and leafy dress, she has also been spotted in the foothills of Caldas and Antioquia. Her voluptuous body is believed to cause wide-spread flooding when she bathes, and as a guardian of tropical forests, she likes to haunt loggers and illegal miners. Even unfaithful spouses are not spared her wrath, known to punish them by placing obstacles along a path, and causing them to venture deep into the wilderness to get lost for many hours.

The International Union for Conservation of Nature (IUCN) is another guardian of the Colombian forest and much younger than scruffy El Mohán and seductive Madremonte. Founded in 1948, the IUCN has three designated wilderness areas in Colombia. This designation, part of a global standard of conservation, is awarded to natural habitats where flora and fauna remain intact. As a non-profit that works closely with the World Bank, United Nations and local government, in 2014, the IUCN awarded Santuario de Flora y Fauna Galeras top honors on their global Green List.

Covering an area of 8,240 hectares and rising 4,200 meters above sea level, this natural sanctuary is named after one of the most active volcanoes on the continent. The ash-covered peak of Galeras can also be seen from virtually every landmark in the capital Pasto on clear days. Galeras’ eruptions have given this southernmost department its fertile valleys that support a wide variety of plant and animal life. From high altitude wetlands (páramo) to Andean forests nestled at the base of the volcano, Galeras, is also the protagonist of many legends, including the “fire tiger” which crawls out of the mouth of this lava beast on a full moon, the incarnation of departed warriors of the Yumbo tribe.

It was named after Gorgon, the Greek sea monster that wore a belt of snakes and ensured his island remained wild and uninhabited. Myth has it that Spanish conquistador Francisco Pizarro landed on this Pacific island in 1527, but quickly fled south to pillage Peru when his boats were surrounded by sharks and the boots of his conquistadores by poisonous snakes. Today, the reptiles are mostly under control and ecotourism is helping support the paltry income of this rocky outcrop. Gorgona is home to blue lizards, hammerhead sharks, Green Sea Turtles and the rare Black-crowned Antshrike bird. This former prison colony consumed by a lush rainforest is rumored to have its share of ghostly apparitions – not marine biologists, but convicts who perished in this “Green Hell.”

A three-day visit to Tatama is unforgettable. Covering 519-square kilometers of the western Cordillera, this remote park covers three departments – Risaralda, Chocó and Valle del Cauca. One of the more inaccessible national parks in all of Colombia’s expansive system, Tatama, has few roads and most of them have been eroded by rain. Hiking trails are treacherous, as people disappear within a few meters into bushy dense forest. My most memorable moment: creeping up the mountain on a dark morning to reach the hilltop. Accompanied by fellow birders to watch a sunrise chase away the last loitering shadows, Tatama is an enchanting forest with real beasts and those that can only be imagined.